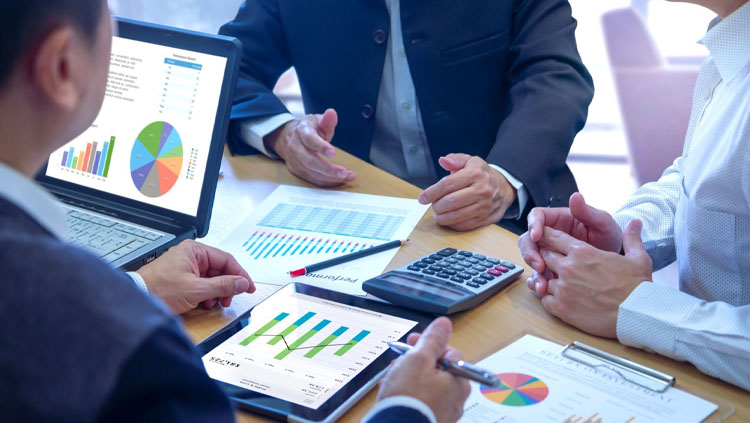 The cancellation of Neuroscience 2020 was a significant loss to the neuroscience community and SfN’s operating budget. But instead of having to scale back programming to fill its financial deficit, SfN was able to continue its service to the community by leveraging the Society’s Strategic Reserve Fund. Since its inception in 2003 from an initial $3 million investment, the Strategic Reserve has been carefully managed by the Investment Committee to grow into assets worth tens of millions of dollars.

Here, Investment Committee Chair Ray Dingledine, and the Committee’s outside investment expert volunteer members Adam Koppel and Bill Heitmann (D-K-H), share the strategy guiding the development and use of the Strategic Reserve.

Neuroscience Quarterly: Can you talk about the broad purpose of SfN’s Strategic Reserve Fund and how it is managed?

D-K-H: The Strategic Reserve Fund is a financial tool to enable SfN sustainability and longevity in the face of extreme circumstances, such as having to cancel the annual meeting at the last moment. The primary goal for the Fund is defined as 115% of current operating expenses plus liabilities and was reached about three years ago. With this goal met, the Fund can support special member-oriented projects. An annual “draw” from the Fund of $2 million was begun in 2019 for this purpose. We envision the Strategic Reserve as a “forever fund” that, 50 and 100 years from now, will exist to strengthen the financial position of SfN.

We envision the Strategic Reserve as a “forever fund” that, 50 and 100 years from now, will exist to strengthen the financial position of SfN.

The Fund is managed to realize consistent mid-to-high-single-digit returns (~6-8%) annually at an appropriate risk tolerance to protect the core principal assets. The strategy employed to accomplish this is diversification across asset classes including private equity, domestic and international public equity, cash, and a variety of fixed income investments.

An Investment Committee consisting of SfN members and external investment experts (who serve as volunteer members) employs a Custodian, Morgan Stanley, who recommends changes to the portfolio, executes committee decisions, and assembles holistic evaluations of overall Fund performance in comparison to stated benchmarks. The Investment Committee, which meets formally each quarter and more often when necessary, reports both to SfN Council and coordinates with the Finance Committee.

NQ: Members ask “Why doesn’t SfN use the Strategic Reserve Fund to reduce membership, meeting registration, and other costs?” How would you respond to questions like that?

D-K-H: The Strategic Reserve Fund is managed to balance current spending needs against future opportunities for, and threats to, the Society. An example of a future challenge (some would say a threat) is the changing model of scientific publishing, which would likely require substantial new funding if we are to transition gracefully. In case of a true economic catastrophe, additional spending from the Strategic Reserve would give Council and SfN staff time to engineer a graceful down-size to a new normal balance of current revenue and programmatic spending.

Broadly, the Fund does reduce member costs somewhat in the form of the annual $2 million draw. This source of income supplements the other sources of income such as dues and fees. This draw does not completely subsidize such costs to members as the Fund is not large enough to do that and maintain its core principal. If principal was used, the Fund would be reduced to zero in a short period of time and then there would be no source of capital to draw from. To use an analogy, the Reserve Fund is like a cow that provides nutritious milk each year. If other parts of the cow were used to supply calories, the milk would no longer flow.

NQ: Beyond the purposes of serving as a “reserve” account for the Society, how else does the Strategic Reserve Fund serve to contribute to SfN’s financial strength?

D-K-H: The purpose of our portfolio has expanded from the early days when it provided a modest financial backstop to the Society. Its original purpose allowed SfN to continue operations last year even when our annual meeting was cancelled. Now, the portfolio also serves as a regular source of income to the Society that is used to fund special member-oriented projects and other operations.

Further, the reserves also provide a secure source of collateral that has allowed us to purchase our headquarters building in Washington, D.C., and obtain two lines of credit.

Further, the reserves also provide a secure source of collateral that has allowed us to purchase our headquarters building in Washington, D.C., and obtain two lines of credit. Our new headquarters building has allowed society programs to expand as our membership increased, because new programs require new administrative staff, which in turn requires a larger space footprint. Access to the lines of credit has been valuable to SfN as they have very low interest rates. This means that when SfN has a need for cash to meet operating expenses – as it did last year during the crisis caused by the pandemic and the cancellation of the annual meeting – the Society can use the low-interest credit lines rather than having to withdraw from the higher-yielding assets in the Strategic Reserve. Finally, the size of the portfolio can give some comfort that the Society can remain stable during brief periods of financial instability.

NQ: Where does the annual “draw” of $2 million from the Strategic Reserve Fund fit into SfN’s annual financial plan?

D-K-H: Council and staff set the Society’s annual budget with the expectation of the $2 million draw to partially fund operations. Such annual draws become a source of cash like other sources such as membership dues, annual meeting fees, advertising revenue and grants.

The annual draw is relied upon by the Society to help support SfN operations and programming. Examples of initiatives funded by the annual draw include: advocacy efforts to promote neuroscience research funding; redesigns of BrainFacts.org and Neuronline; scientific training programming; and operational software and security.

The annual draw of $2 million was determined as the largest amount that would not, under normal economic circumstances, require a change in the investment strategy for the Strategic Reserve. The draw represents about 3% of our current liquid reserves each year.

NQ: The cancellation of Neuroscience 2020 caused a significant deficit in SfN’s budget for fiscal year 2021. How was the Strategic Reserve Fund utilized to minimize disruption to SfN’s operations and the members it serves?

The annual draw of $2 million was determined as the largest amount that would not, under normal economic circumstances, require a change in the investment strategy for the Strategic Reserve. The draw represents about 3% of our current liquid reserves each year.

D-K-H: The global pandemic in 2020 created an extraordinary operating and financial situation for SfN and almost every other similar organization. As a result, a major reliable source of annual income did not materialize last year. This put a significant strain on the Society since much of its annual expenses are fixed cost or are committed to more than a year in advance. Such a circumstance is exactly one of the reasons for the Strategic Reserve Funds existence – to enable normal internal operations in the face of extraordinary external conditions.

In response to the pandemic crisis, the SfN operating budget was rather rapidly adjusted to defer new programs and new capital investments. Nonetheless a sizeable hole in the budget remained. The Strategic Reserve Fund was used to buffer SfN against additional programmatic loss. The liquid portion of the reserves was used as collateral to upsize our lines of credit. This approach was deemed preferable to withdrawals from the reserves because the interest rate on borrowed funds is currently much lower than the rate of return on the reserves.

In essence, the size of our strategic reserves allowed a lower-cost solution to our pandemic-caused financial conundrum. We did not have to withdraw funds at a low point in the market; rather, we remained nearly fully invested during the rapid market comeback over the past year.

NQ:  Adam (AK) and Bill (BH), neither of you are active neuroscience researchers. What drives you to contribute your time to SfN as a volunteer member of the Investment Committee?

AK: The Society for Neuroscience and the global community of neuroscience research is a priority for me, even though I am not currently an active researcher in the space. I was in neuroscience research in the mid-1990’s when I was a graduate student at the University of Pennsylvania doing axon guidance and brain development research in Jonathan Raper’s lab. I was an SfN member in those years and I fondly remember going to and presenting at several annual SfN meetings. I think I may even be an author on a paper that was published in the SfN Journal.

In essence, the size of our strategic reserves allowed a lower-cost solution to our pandemic-caused financial conundrum.

Neurology and Neuropsychiatric disorders plague our society as much as almost any other type of disease. The basic and translational science that comes from the work of SfN members have had and will continue to have such a remarkably positive impact on society’s ability to help the patients and families of unmet medical needs associated with nervous system disorders. I am honored and proud to be a part of SfN again two decades after completing graduate work. I do not think I will be unlocking any technical secrets of the brain in the coming years but I do hope to help bring stability and sustainability to the Society (via the Strategic Reserve Fund) so all of you that are reading this article can unlock such secrets. Thank you for what you do… it is really important and fully appreciated.

BH: I have personally experienced the results of neurological research. A number of years ago one of my sons was seriously injured in an auto accident. His injuries put him in a wheelchair. Intense intervention by the pediatric orthopedic team at Columbia Presbyterian and Arnold Gold along with more than a year of therapy helped him fully recover. My participation in SfN’s investment committee is my way of showing appreciation to the world of neuroscience.

Ray Dingledine is professor and former chairman of the Department of Pharmacology at Emory University School of Medicine, where his research focuses on the roles of inflammation in epilepsy. He co-founded two start-up companies to address unmet clinical needs, Neurop Inc (clinical stage with focus on pain and ischemia) and Pyrefin Inc (preclinical with focus on anti-inflammatory drugs). He is an elected member of the US National Academy of Medicine and the Norwegian Academy of Science and Letters.

Bill Heitmann retired from Verizon in 2010 as Senior Vice President of Finance. Among other responsibilities, he was the Chief Investment Officer responsible for nearly $60 billion of pension and 401k assets. Since then, he has been a board member and advisor of mutual fund companies, private real estate partnerships, and private equity funded companies.

Adam M. Koppel is the managing director at Bain Capital Life Sciences. He initially joined Bain Capital Public Equity in 2003 where he worked as a leader within the healthcare sector until 2014. From 2014 to 2016, Dr. Koppel was EVP of Corporate Development and Chief Strategy Officer at Biogen. Koppel received an MD and PhD in Neuroscience from the University of Pennsylvania School of Medicine.