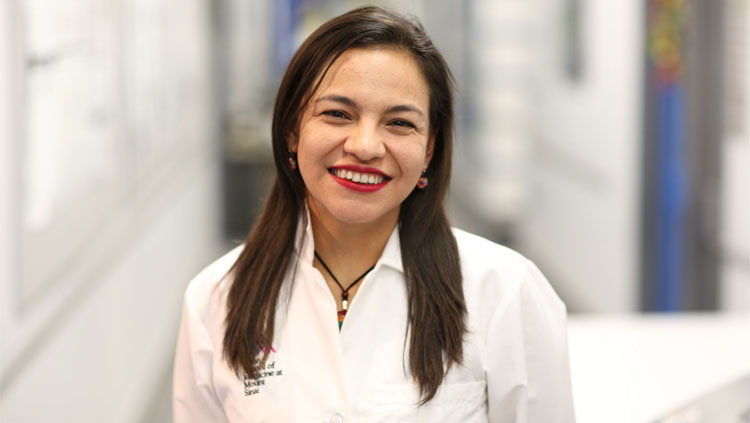 “Future of Neuroscience” is a series of interviews with rising members of the field. A forward-looking complement to SfN’s “History of Neuroscience” autobiographies of distinguished researchers, interviewees reflect on their emerging careers and share thoughts on where they believe neuroscience is headed.

Dr. Angélica Torres-Berrío is a postdoctoral fellow at the Friedman Brain Institute at Mount Sinai and an IBRO scholar. Her research is focused on understanding how stress leads to enduring epigenetic alterations linked to depression and cognitive dysfunction. She is also a member of the advisory committee of the Fundación STEM sin Fronteras (STEM Without Borders Foundation), an organization that seeks to provide young students in rural areas in Colombia with opportunities for a better future in science. Her dream is to run her own lab while giving more visibility to neuroscientists from Latin America.

A Spanish version of this interview, translated by Torres-Berrío, is available.

Neuroscience Quarterly: Why did you choose to pursue a career in neuroscience?

It is because one day I got lost in the streets.

Angélica Torres-Berrío: It is because one day I got lost in the streets. Near the end of a semester during my undergrad, I had a lot of work to do with assignments. I stayed overnight at my friend's place to finish an assignment that we had to turn in the next day. I did not sleep the entire night. I took a shower and then ran through the university — I had walked the route many times. But because that day I was super stressed about being late, I decided to take a shortcut. I took a route I thought was faster, but actually I ended up being lost. I stopped and tried to think clearly about where I was and identified some of the streets. And then I got lost again. It turns out I was walking in the opposite direction to where I had to go. I realized where I was and walked the other way. I finally made it, half an hour late. After reflecting on that, I thought, “Okay, I need to know why my brain was not computing where I was.” I started to learn about spatial memory and the role of the hippocampus, plus how stress affects spatial memory. That was pretty much why I ended up doing neuroscience.

NQ: Now that you are in neuroscience, what is your specific area of research?

ATB: During my PhD, I initially studied stress and spatial memory, but then I switched labs and I started to study how stress increases vulnerability to depression. For my scientific career, I am interested in how stress is the main risk factor for psychiatric disorders, including those that involve alternation to cognitive functions. I am also interested in how stress affects these behaviors across the lifespan. This is important because when you experience stress very early in life, it is going to have a huge impact on your brain development and increase your vulnerability to psychiatric disorders.

NQ: Your education and career has spanned four countries and three continents. What motivated those moves?

I applied for the International Brain Research Organization’s Canadian School of Neuroscience, a training program for Latin American and African students.

ATB: My career path hasn’t been a straight line. One of the reasons is because neuroscience in my home country, Colombia, was not very well developed. By the time I finished my undergrad in Colombia, I did not speak any English but I wanted to continue my scientific growth. I found a master’s program in Spain and it was actually more affordable than doing a program in Colombia. By the time I was in Spain, I was studying English by myself. That gave me the preparation to think about doing a career in North America. I applied for the International Brain Research Organization’s Canadian School of Neuroscience, a training program for Latin American and African students. I got into the school, which occurred in Montreal at McGill University — pretty much one of the icons of neuroscience worldwide. I fell in love with Montreal and applied to attend McGill for my PhD. Now I am in Dr. Eric Nestler’s lab for my postdoc. This path, which was not completely direct, was still the “shortest” considering the financial means I had at that time and how expensive it is to apply for graduate school in North America when you come from a developing country. My indirect path helped me navigate the academic systems in those countries, as well as connect with a variety of trainees who ultimately became friends and collaborators.

There's something that I started to call "the double imposter syndrome." It’s when you feel like you are not competent enough — normal imposter syndrome — but then you also feel that in a second language.

NQ: What has your experience as an international student been like?

ATB: Being an international student from a developing country is a huge challenge. You complete a certain preparation in your country of origin, but then when you go to international institutions you are behind in many aspects and need to catch up. Another challenge is of course the language barrier. There's something that I started to call "the double imposter syndrome." It’s when you feel like you are not competent enough — normal imposter syndrome — but then you also feel that in a second language. It can be hard to express your ideas, talk with native speakers, write an article, or give a talk. You face these challenges while often being subjected to implicit bias by evaluators or peers. Another problem is not being eligible for scholarships and awards. I cannot apply to a lot of scholarships back in my home country because I am not physically there and I am not affiliated to any position over there. And I cannot apply to many awards here in the U.S. because I am not from here and I am under a visa.

NQ: What can Western countries do to support developing countries and their research programs?

ATB: It is very important to facilitate mobility and give more visibility to the work done by people from developing countries. A couple of years ago I wrote a review article about the neuroscience research that was conducted in Latin America. When I was sharing the work with colleagues, I was very surprised that many people in the United States did not know who those researchers were or what they were working on, despite its relevance. That is important because not only can we increase collaboration, but there is probably work that has been conducted in developing countries that is being ignored in North America. Providing opportunities to trainees from developing countries, like the Canadian School of Neuroscience did, can make people more aware of the latest cutting-edge science that has been conducted in these countries and also can grow the ways people think scientifically so they can apply such knowledge in their country of origin.

“[The Reviewer Mentorship Program] is an excellent initiative and I would like to encourage junior trainees, especially those from developing countries, to engage in this program.”

NQ: Describe your experience in the Reviewer Mentorship Program, SfN’s initiative pairing trainees with a mentor to practice the peer review process. How has it impacted your work?

ATB: At the end of my PhD, I decided to apply because it is really important to get to know how to review a scientific article. I think it is a good exercise for writing and I enjoyed being mentored by a senior scientist. I think that is the most important part because you get feedback from someone who is a journal editor or an expert in the field, but you can also get to know that person. After being a reviewer for this mentoring program, I started to receive a lot of invitations from scientific journals to review work. As a reviewer, the type of questions I ask other scientists reflects onto my own research. I will imagine that I am a reviewer of my own work and try to think of the type of experiments a reviewer may ask me to do. RMP is an excellent initiative and I would like to encourage junior trainees, especially those from developing countries, to engage in this program.

NQ: Where do you hope your career will take you over the next few decades?

ATB: I definitely would like to continue doing research and have my own lab. My ideal scenario is to continue working in animal research but I am also interested in translational research. I think that the work that we do in the stress field has huge implications for the general public. Especially now with the COVID-19 pandemic and all the children that have been exposed to different stressors by being at home and not interacting with people. That problem is going to have a huge impact decades from now, and we as neuroscientists could help mitigate these effects.