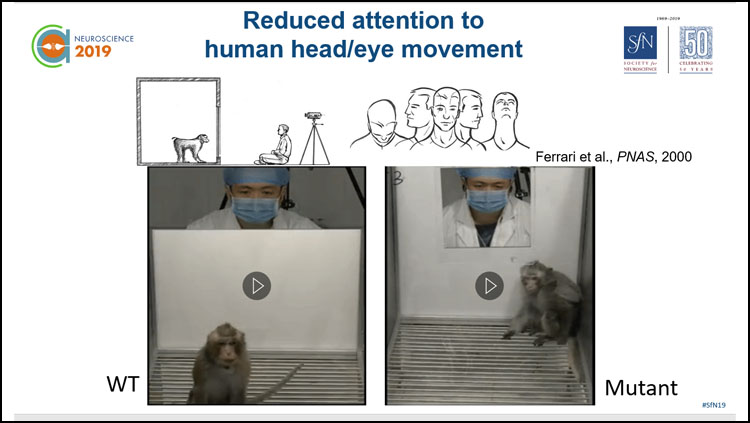 Approximately one out of every 54 children is diagnosed with autism spectrum disorder (ASD). While the exact cause can vary and includes both genetic and environmental factors, neuroscientists continue to hone in on the neurological origins. In a press conference from Neuroscience 2019 titled “From Molecules to Monkeys: The Future of Autism Research," researchers addressed the challenges inherent to studying cognitive disorders like ASD in the human brain.

"Autism ... has complex social and behavioral interactions," said Emanuel DiCicco-Bloom, professor at Rutgers University Robert Wood Johnson Medical School and moderator of the press conference. "Autism is a uniquely human disorder, and this places some limitations on the value of animal or cell models and what we can learn from them."

"Autism is a uniquely human disorder, and this places some limitations on the value of animal or cell models and what we can learn from them."

Nevertheless, researchers from the press conference have deployed innovative genetic techniques, an increasing understanding of which genes deserve further study, and a more targeted approach when using non-human models for research.

Even though the rodent is the most commonly used research model for ASD, there are significant differences between human and rodent brains. The mouse brain is almost 1,000 times smaller than the human brain — and these size and complexity differences lead to research limitations. Thus, to find an alternative model with greater neuroanatomical and behavioral similarities, as well as a model that allows for gene editing using CRISPR/Cas9, scientists at the Chinese Academy of Sciences selected a primate (monkey) model to see if it would be a sufficient replacement.

They chose two genes that, when mutated, are known to be significant for ASD in humans: SHANK3 and CHD8. Both primates and mice have these genes, but CRISPR/Cas9 provided a novel method for the researchers to disrupt these two genes in primates. The team studied the expression of the mutated proteins and compared their results to previous studies of transgenic rodents with SHANK3 and CHD8 mutations. For SHANK3 mutations, the rodent model developed a normal brain, but the primate model showed changes in the prefrontal cortex — a striking difference that researchers took to mean that SHANK3 is indeed an important gene as it relates to ASD. For CHD8, the primates showed no brain defects but did exhibit skeletal deformities and enlarged brain size, as opposed to the rodent models that showed no deformities. Primates with either of these mutations also showed ASD-like behavioral symptoms, like restrictive, repetitive actions. Additionally, drug treatment with the antidepressant fluoxetine, which is also used to treat humans with ASD, reduced the primates' behavioral symptoms.

"The implication of our work is that we now have an alternative model to test various hypotheses and potential drugs for autism."

The researchers saw this as a successful first step towards assessing the primate as a more effective non-human model than the rodent model. Yong Q. Zhang, professor and presenting author, said, "The implication of our work is that we now have an alternative model to test various hypotheses and potential drugs for autism."

Working  from the understanding that individuals with ASD struggle with communication, social interaction, and sensory inputs, researchers seek to understand whether synapses (the sites where brain cells communicate with each other) play a role. For the majority of ASD cases, the causes are polygenic, i.e., multiple genes are involved. But, infrequently, there are monogenic cases of ASD, which helps isolate that single gene's impacts. Scientists at the University of Cambridge studied a synaptic gene that is connected to ASD, NRXN1, and how a mutation might affect connectivity and activity of brain cells.

Using human stem cell-derived cortical neurons generated from individuals with monogenic ASD, the researchers used CRISPR/Cas9 to engineer human cortical neurons and compare them to stem cells from individuals without ASD. They found no difference in connectivity and number of synapses in the neurons with the NRXNI mutation. They did, however, find that mutated cells behaved differently, demonstrating an increased firing rate but firing less frequently together (so-called "burst" patterns of neural communication).

Presenting author and academic neurosurgeon Mark Kotter explained, "At this point, we conclude there's no obvious difference with regards to neural circuits and connectivity, but we may have missed something... we need to dig in further." But, since they did see differences in synaptic communication in CRISPR/Cas9-engineered cells, "We think that combining stem cell approaches with synthetic biology approaches is actually a very powerful way of studying autistic changes ." Future research will include increasing cell lines, looking at gene expression, and understanding the electrophysiological properties of the associated cells.

Researchers will need to continue honing their work before any of these interventions may be appropriate for clinical trials. Rather than over-prescribing a potential treatment without understanding its full effects, researchers are instead ensuring they understand the impacts in non-humans completely first. "Nonetheless, we're making exciting progress in understanding previously unrecognized environmental factors, as well as the development of important model systems... that are allowing us to define disease mechanisms," said DiCicco-Bloom.