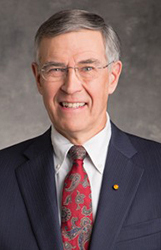 Rush Holt is CEO of the American Association for the Advancement of Science, the world's largest multi-disciplinary scientific and engineering society, and a former member of the U.S. House of Representatives, where he represented New Jersey's 12th congressional district for 16 years.

Like SfN, AAAS represents a broad array of scientific disciplines and members from around the world. Why is it important for scientists across disciplines and borders to join together in common cause by joining professional scientific societies? What are some of the most important areas where you think that unity can make a difference to advance science?

Interdisciplinary collaboration is deeply embedded in the roots of the American Association for the Advancement of Science. We were founded 168 years ago, when a group of scientists from a variety of fields banded together to form an interdisciplinary scientific membership organization tasked with advancing science, ensuring that the practices of science are carried out responsibly and fairly, and that it works to the benefit of all people. Today, we lead and facilitate an array of activities in pursuit of our mission.

It is crucial that scientists join professional scientific societies to stand together as a force for science. By joining, you lend your voice to a group of thousands of your peers whose individual voices are collectively amplified when supporting R&D funding, protecting the rights of scientists, and speaking out on other relevant issues. We are very pleased to have the Society for Neuroscience as one of our affiliates. Our two organizations frequently collaborate on advocacy efforts, such as coordinating testimony last year on federal investments in the BRAIN Initiative before the House Appropriations Subcommittee on Commerce, Justice, Science, and Related Agencies.

Become a member of the AAAS and join its neuroscience section here.

A major challenge requiring unity within the scientific community is improving diversity. AAAS has a long history of efforts to improve diversity, such as prohibiting our annual meetings from taking place in the “Jim Crow” South in the 1950s; establishing a Committee on Opportunities in Science in 1972 to guide AAAS diversity activities; passing a nondiscrimination resolution to protect the rights of LGBTQ individuals in 1975; organizing internships and fellowships for scientists of underrepresented populations and scientists with disabilities; and holding a forum on Implicit Bias in Scientific Peer Review last April. Dialogue within and between scientific societies is essential for knowledge sharing and the development of best practices on this issue. Improving the level of diversity in science is not only the right thing to do, as everyone deserves an equal opportunity to participate in science, it also benefits the science by bringing more voices to the table.

As a physicist who spent 16 years as a member of the U.S. Congress, what is your advice for how the scientific community should engage policymakers and the public, and what messages are most effective? What can the U.S. learn from other countries’ science policy strategies and how can the U.S. better influence global science policy?

My advice is to get involved in any way that you can. We fortunately have a government that allows scientists to reach out, interact, and communicate their work and backgrounds to policymakers at local, state, and federal levels. One of the most effective ways to communicate with policymakers and the public is through stories. There is no shortage of information about science and what it does, but stories help people contextualize and understand why science is so important. This may include stories about what inspired you to become a scientist or how your research positively impacted the life of an individual or community. A good story with emotional resonance can stick with an audience long after the meeting or interaction is over.

The problem is not that the United States or other governments necessarily need more scientists to become better lawmakers, but we do need lawmakers to think and act more like scientists. We need them to base their decisions on evidence, test their theories, and examine the data. Although there are some anti-science attitudes among certain policymakers — particularly regarding climate change — most of the time, the more common problem is ignorance. The United States could learn from countries that are crafting new approaches to better engagement with scientists and consideration of their input. Canada, for instance, has shown promising signs of improvement in this regard since the election of its new prime minister, Justin Trudeau. AAAS is also developing a concept for a science policy center that would fill the void left by the defunding of the Office of Technology Assessment, which provided timely, objective information for policymakers.

Many of us who attended graduate school were programmed to think about a single career option: to become faculty at research universities. Unfortunately, such positions are limited in number. But rather than despair, a graduate degree in science presents a world of opportunities, and the scientific community can help by doing at least three things: Helping early career scientists understand the wide range of career possibilities available to them; helping them see how the skills they have gained can be used in many different ways and to accomplish a wide range of goals; and affirming the value of the full range of careers to the vitality and health of science.

Early career scientists can help shape the future of scientific research by being open to possibilities in many different sectors, especially policymaking. They also shape the future of research in the students they teach, those whom they mentor, and the communities they reach. In order to support early career scientists, AAAS runs a Science Careers website that includes job opportunities and stories of people who have considered careers “beyond the bench.” We also support mentoring programs and launched a Career Development Center earlier this year, which features courses on communicating science, engaging in science policy, understanding the federal R&D budget, and proposal writing, with many more on the way.

AAAS has a number of programs that focus on science as a mechanism for advancing global diplomatic efforts. What can international scientific societies such as SfN do to further the goals of science diplomacy?

The AAAS Center for Science Diplomacy was founded in 2008 to build bridges between countries through science, and between the scientific and diplomatic communities. One of the initiatives is to catalyze and facilitate research cooperation between U.S. scientists and those in countries with which the United States has difficult diplomatic relationships. For example, AAAS has sought to build connections and relationships between the U.S. and Cuban scientific community since 1997. Most recently, in December 2015, AAAS co-organized a strategic meeting on neuroscience cooperation with the Cuban Academy of Sciences and the Cuban Neuroscience Center involving U.S. academic and industrial researchers, including SfN President Hollis Cline.

Scientific societies can also develop productive, collaborative relationships with their counterparts in other countries to share model practices in their field, build networks, hold joint scientific meetings, and support the exchange of researchers. These connections are particularly important to emphasize between countries when diplomatic relations are strained. Science provides a uniquely effective platform for diplomacy as nations collaborate in the shared pursuit of knowledge, advancement of science, and improvement of the human condition.