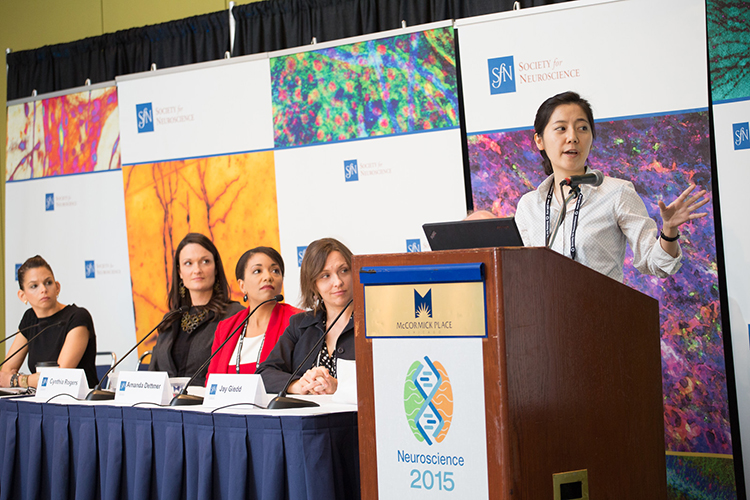 When it comes to detecting disease, the earlier, the better. Now neuroscientists are beginning to look earlier than ever: before birth.

Using new technology, researchers are scanning brains as they develop in the womb, discovering differences between full-term and preterm infants even before the latter’s early arrival. They are finding babies’ first experiences — from the length of time in the womb to the exposure to certain molecules — shape their brains, wiring them to be impulsive or cautious, social or reserved. At a Neuroscience 2015 press conference, researchers discussed using these initial signs to intervene as early as possible and prevent disorders such as autism spectrum disorder and attention deficit hyperactivity disorder.

“The earlier we can intervene, the earlier that we can alter the course of this fate, the more effective it would be,” said session moderator Jay Giedd, an expert on the developing brain at the University of California, San Diego.

One early hint of trouble may be found in the mother’s blood. Compared with other women of child-bearing age, mothers of children with autism spectrum disorder (ASD) are four times more likely to have antibodies in their blood that target brain cells. While antibodies normally fight infections, some can bind to brain cells and disrupt their signaling. Fetal brains are particularly vulnerable to these antibodies because the protective blood-brain barrier has not yet formed.

To see whether these specific antibodies could trigger autism-like behaviors, Lior Brimberg and a team from the Feinstein Institute for Medical Research injected them into pregnant mice. The researchers discovered male offspring exposed to one particular antibody in utero developed fewer connections between neurons compared with unexposed mice. The exposed male mice also displayed ASD-like behaviors as adults. When given a choice between spending time with a new object or an unfamiliar mouse, typical mice opt to spend more time with the unfamiliar mouse. But males exposed to the antibody spent equal time with the object and the mouse, indicating reduced sociability, a behavior reminiscent of ASD. Female mice exposed to the antibody showed no differences compared to unexposed animals.

The researchers determined the antibody attacks a protein on the membrane of brain cells that is key to neuronal function. Previous studies have linked the gene encoding that same protein to ASD and have shown the deletion of this protein in mice leads to ASD-like behaviors.

“Our study could lead to the development of reagents that block these antibodies and prevent the occurrence of this subtype of autism,” Brimberg said.

In addition to molecules in the mother’s bloodstream, the composition of the mother’s breast milk also influences development. To understand whether consuming breast milk with high levels of cortisol — a hormone known for its role in the stress response — affects cognitive and social development, Amanda Dettmer, a postdoctoral researcher at National Institute of Child Health and Human Development at NIH, studied young monkeys between four and eight months old (equivalent to human toddlers).

“Higher cortisol in milk, beginning from birth, predicts impulse control on a cognitive task and predicts more cautious social behavior,” Dettmer said, noting the high cortisol levels were still within the normal range. “What we think we’re seeing here is that cortisol on the higher end of normal — in certain circumstances — is adaptive.”

To figure out why, Cynthia Rogers, a professor at Washington University, examined the brain connections in premature and full-term infants. Full-term infants were scanned at birth, while premature infants were scanned on their due date. Diffusion tensor imaging (DTI) revealed preterm infants possessed weaker structural connections than full-term babies within networks important for attention (the frontoparietal network) and emotion (the default mode network); both networks have been shown to be abnormal in children with ASD and ADHD. Functional MRI indicated premature infants also displayed less coordination within these networks.

“Prematurity is altering structure and function of brain regions that are linked to the very childhood psychiatric disorders that they are at higher risk for,” Rogers said.


Even Before Birth, Premature Infants Have Altered Motor Circuits

It’s even possible to detect changes before birth. Using new technology to perform functional MRI scans on fetal brains, Moriah Thomason of Wayne State University examined connections within the motor system of developing babies, some of whom were at high risk for preterm birth.

When scanned at gestational week 30, babies ultimately born prematurely had less coordination between distant motor areas compared with babies that were born full term. Local connections within the motor system, however, were similar in both groups.

“Already these systems, prior to birth, are showing some of these differences,” Thomason said. Although the causes and effects are as yet unclear, the same factors may contribute to both premature birth and motor impairments later on.


Abnormal Brain Circuitry in Children Destined to Get Huntington’s Disease

Diseases that strike much later give off early warning signs as well. Brain connectivity issues arise earlier than suspected in Huntington’s disease (HD), a genetic disease that disrupts movement, emotion, and cognition. Although the symptoms generally strike people in their 40s, Jessica Lee, a graduate student in Peg Nopoulos’s lab at the University of Iowa, wondered how the mutation responsible for HD affects development before symptoms appear.

To find out, Lee measured resting activity in the brains of children and teenagers with and without the mutation. Those with the mutation — who will go on to get HD — had weaker functional connectivity between the striatum and the cortex, circuits that are important for motor function and emotion. On the other hand, areas responsible for cognition had stronger connections in mutation carriers, suggesting a degree of compensation.

“Decades before the onset of HD, having this genetic mutation for HD actually affects development, causing some changes in the strength of brain connections,” Lee said. The findings suggest “adult-onset disorders might have their root in early developmental changes.”

Different molecules, stressors, and diseases affect the wiring of the young brain. Better understanding of the brain’s nascent wiring may prompt earlier interventions that can reverse these changes and lead to a healthier lifestyle.