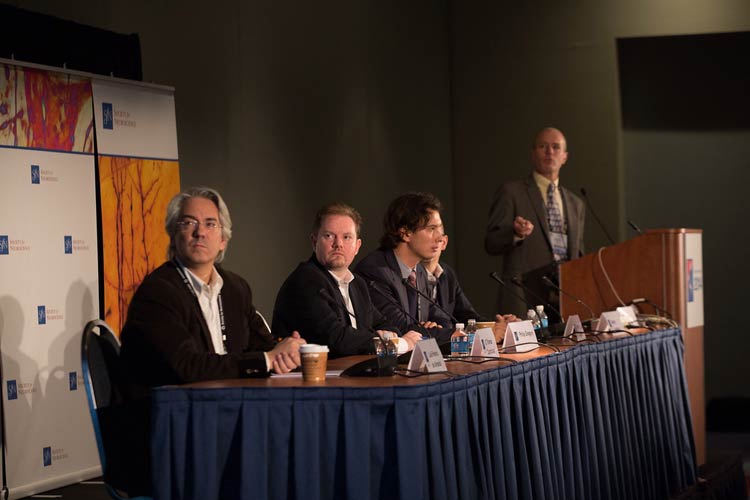 During a press conference at Neuroscience 2014, presenters described how stem cells could serve as models for disease, as assays to test treatments, and as treatments themselves.

Stem cells offer promise for treating a range of disorders, from Alzheimer’s and Parkinson’s disease to stroke. Although the field has struggled with ethical debates, many researchers are creating new strategies and finding new funding sources to advance stem cell research and develop new therapies.

During a press conference at Neuroscience 2014, moderated by Jane Roskams of the Allen Institute for Brain Science in Seattle, presenters described how stem cells could serve as models for disease, as assays to test treatments, and as treatments themselves.

Stem cells can be used to model neurodegenerative diseases, helping to uncover the intricacies of the disorders and test possible treatments. Martin Hallbeck of Sweden’s Linkoping University wanted to understand what causes the progression of Alzheimer’s disease, which starts with memory problems and becomes worse as it spreads throughout the brain.

In Alzheimer’s disease, a protein called amyloid beta clumps together into toxic bundles called oligomers. Oligomers can act as seeds by triggering additional clumping and possibly spreading the disease by moving from neuron to neuron.

To see how oligomers spread, Hallbeck and his team modeled the brain by programming human skin cells into neural stem cells. By tracking amyloid beta oligomers, the team discovered the oligomers crossed to the next neuron by traveling inside exosomes, small vesicles released from cells. Additionally, blocking the uptake of exosomes inhibited oligomer transfer. Unfortunately, because exosomal uptake is vital to cell survival, blocking it is not a viable treatment option. Nevertheless, “it shows that this model can be used to test potential drugs,” Hallbeck said.

Philip Gregory of Sangamo BioSciences Inc. in Richmond, Calif., is using stem cells to test potential treatments for Huntington’s disease, which is caused by a mutation in a gene that creates a defective version of the protein the gene codes for. The mutant protein accumulates in the brain, causing cell death in the striatum and leading to uncontrollable movements and cognitive difficulties. Previous treatments have tried to lower levels of the mutant protein, but they’ve been unable to distinguish between the mutant and the normal version of the protein, which is needed for healthy functioning.

In an effort to selectively target the defective protein, Gregory designed a zinc finger protein transcription factor (ZFP TF) to bind to and control the expression of the defective gene. Skin stem cells from Huntington’s disease patients were differentiated into neurons and treated with the ZFP TF. The treatment reduced expression of the defective protein by more than 90 percent and decreased cell death. The group has gone on to show the ZFP TF also reduces movement problems in mouse models of Huntington’s disease, providing hope for a novel Huntington’s therapy.

Other groups have been investigating stem cells as a treatment themselves, rather than just a way to model a disease or test other therapies. Parkinson’s disease is caused by the death of dopamine-producing cells in the substantia nigra. This makes it a good candidate for stem cell therapy because “once you replace the dead cells, you will be able to restore the levels of dopamine, which will help cure the disease,” said Ruslan Semechkin of International Stem Cell Corp. in Carlsbad, Calif.

Semechkin tested this idea using human parthenogenetic stem cells. These cells are derived from unfertilized eggs and can be chemically induced to begin early stages of cell division. This technique doesn’t destroy embryos, and the cells can be continuously produced in the lab, providing plenty of cells for treatments. Neural stem cells derived from this method were implanted into the midbrain of both rodent and nonhuman primate models of Parkinson’s disease. Compared to untreated animals, animals treated with the cells had increased levels of dopamine, reduced Parkinson’s symptoms, and no toxicity or safety issues. The therapy is now moving into clinical trials.

A similar strategy could be used to replace the cells lost from stroke. Current stem cell therapies, which target the tissue next to the stroke site, have failed because of poor survival and may cause more damage to the fragile, recovering tissue. A way around this is to implant stem cells directly into the cavity itself. But as S. Thomas Carmichael of the David Geffen School of Medicine at the University of California, Los Angeles, explained, the cavity is filled with inflammatory molecules and dead tissue. “It’s a very hostile environment to put cells in, and yet it’s an ideal target because it’s a cavity and you could fill it with a large volume of cells,” he said.

To help support the cells and ensure their integration, Carmichael implanted neural stem cells in a hydrogel matrix made of naturally occurring molecules that promote survival. A week after mice underwent strokes, either stem cells within the hydrogel or stem cells alone were injected into the stroke cavities. When surrounded by the hydrogel, more stem cells survived and differentiated into mature cells. The hydrogel also recruited new blood vessels into the cavity, helping to further restore and rebuild the injured area.

Luis Pereira de Almeida of the University of Coimbra in Portugal wondered whether transplantation of stem cells might also be a possible therapy for Machado-Joseph disease. Also known as spinocerebellar ataxia type 3, the disease is a genetic disorder that causes problems with voluntary movements, speaking, and swallowing, and is characterized by protein aggregates and neuronal loss in the cerebellum, brainstem, and striatum.

Pereira de Almeida derived neural stem cells from healthy mice without the genetic mutation and implanted them into the cerebellums of adult Machado-Joseph disease mice. Mice that received the healthy cells outperformed mice without the new cells on various tests of motor coordination. Additionally, pathological signs of the disease, such as protein aggregates, inflammation, and the loss of cerebellar Purkinje cells, decreased following implantation. Although Machado-Joseph disease is rare, the success of this strategy sparks hope for the success of similar treatments in other disorders.

Even as each presenter focused on a particular disease, the success of their strategies will affect researchers fighting a wide variety of disorders. As Roskams noted, “There are many ways in which stem cell research can advance how we make brain repair a reality.”