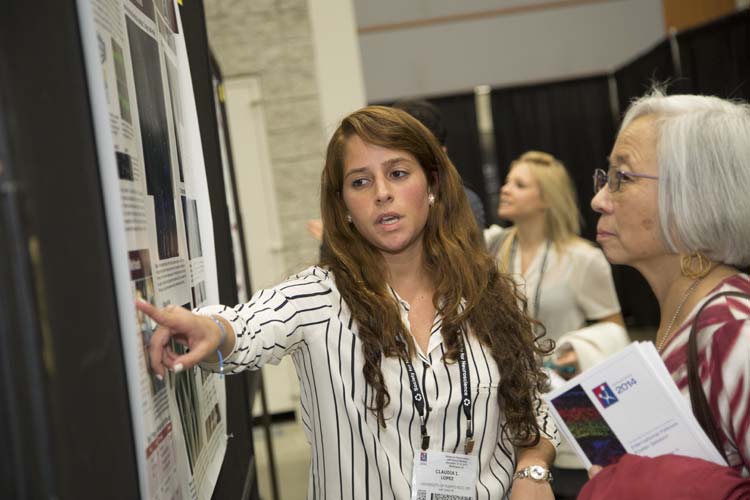 NSP fellows take part intensive mentoring and networking as well as receive financial support to attend SfN’s annual meeting, giving them the chance to present their scientific abstracts and connect with colleagues.

As part of its mission, the Society for Neuroscience works to increase the participation of scientists from a diversity of backgrounds within the field. Since 1981, more than 500 young scientists from underrepresented and diverse backgrounds have participated in SfN’s Neuroscience Scholars Program (NSP), which provides two years of professional development and scientific training opportunities for graduate students and postdoctoral researchers. In an effort to broaden its reach and impact, NSP recently expanded to offer many of its benefits to an even larger field of young scientists. This expansion was made possible by grant renewal from the National Institute of Neurological Disorders and Stroke.

“The support and leadership of NINDS has been instrumental as the NSP program evolves to accommodate the increasingly diverse neuroscience workforce,” said Gina Poe, ex officio leader of SfN’s Professional Development Committee. “This growth reflects SfN’s commitment to provide the resources needed for these trainees to excel in their careers.”

Each year, up to 15 young scientists are chosen as NSP fellows and take part intensive mentoring and networking with former NSP scholars and others leaders in the field. They also receive financial support to attend SfN’s annual meeting, giving them the chance to present their scientific abstracts and connect with colleagues.

Now, in addition to these 15 fellows, NSP includes a tier of resources for all eligible applicants, called associates. This group gains access to select events at the annual meeting, an online library of educational resources and webinars, and an online diversity affinity group of past and current NSP participants for professional networking and guidance.

“Being part of the NSP community has had a tremendous impact on my career development,” said Joseph Arboleda, a former NSP fellow and assistant professor at Schepens Eye Research Institute at Harvard University. “When I joined, I was just starting my postdoc. When I finished, I had been promoted to faculty instructor. I believe the many opportunities for networking and career advancement offered by NSP played a significant role in helping me achieve my goals as a scientist.”

In 2014, SfN received the Summit Award from the American Society of Association Executives (ASAE) in recognition of its Neuroscience Scholars Program. The award, the highest honor in the association industry, recognizes SfN's valuable contributions on the local, national, and global level and its ability to produce innovative, effective, and broad-reaching programs that advance the field, with specific attention paid to expanding diversity.


The Neuroscience Scholars Program helps both the fellows and associates to combat the challenges they may face as minority scientists as they navigate their career paths.

“Some of us are not given adequate guidance in how to succeed in a career,” said Joyonna Gamble-George, an NSP associate and a graduate student at Vanderbilt University. “You can be given information, but if you don’t know how to use it, it loses its value. In NSP, they tell us how to use information.”

She said the program’s webinars, annual meeting sessions, and other professional development resources have had a great impact on her career.

The Neuroscience Scholars Program also benefits the field at large. By supporting scientists from a variety of backgrounds, SfN hopes to advance understanding of the brain and the nervous system through diverse perspectives.

“Diversity in science leads to better science,” Arboleda said. “Specifically, I believe that we need more underrepresented minorities joining research endeavors in every capacity to build successful teams that can tackle new challenges with fresh ideas.”

Gamble-George said she benefitted the most from meeting and interacting with other NSP participants from underrepresented and diverse backgrounds. “Sometimes you don’t see a lot of people who look like you at many large conferences, but being in this program helps you get a sense of belonging,” she said. “It’s inspirational to see others who have gone through what you’re going through.”