The Society continues to embrace the principles that it was founded upon and that its members value: the open exchange of scientific ideas, global scientific collaboration, and the importance of evidence-based decision-making.

The ability to connect with an international community of colleagues is perhaps more important than ever before. With nearly 40 percent of its 37,000 members located outside the United States, SfN facilitates global collaborations in a multitude of ways and continuously seeks innovative ways to provide year-round support and value to members no matter where they live and work.

A common thread in this year’s activities is new online offerings making scientific training, professional development, and career opportunities accessible to members around the globe. In fall 2016, SfN sponsored its first-ever virtual conference, “The Other Brain Cells: New Insights Into What Glial Cells Do.” This members-only event was a resounding success, with advance registration of nearly 2,600 attendees. The conference, composed of eight sessions from 10 experts, included traditional lectures, a panel presentation, and a meet-the-expert Q&A. The event was then available for on-demand viewing to members for six months via Neuronline, SfN’s members-only home for learning and discussion.

“ Attendees reported that they learned much more than they ever expected about the many critical roles that glia play.”
— Leslie Tolbert, SfN Virtual Conference Organizer and Regents’ Professor in the Department of Neuroscience at the University of Arizona

With more than 770 pieces of content, Neuronline continues to serve as a robust online source for neuroscience training and professional development for scientists at all career stages. In addition to the virtual conference, an eight-episode podcast series called “The Perils of Publishing” launched in January 2017, and in spring 2016, SfN switched its webinar model to a members-only approach, ensuring that online learning continues to build member value. Following this change in approach, SfN has seen registration numbers climb and interest in webinars grow. 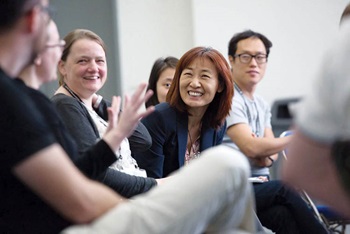 SfN is committed to ensuring that neuroscientists are trained in the best research practices, including considerations of experimental design, data analysis, and transparent reporting to improve the reproducibility of research. Through grant funding provided by NIH, SfN developed a collection of educational tools, openly available on Neuronline, to aid the community in conducting more rigorous research.

These tools include a six-part series of webinar training modules featuring expert perspectives, case studies, and best practices for addressing issues of scientific rigor; background reading and post-webinar discussion guides that build on the webinar topics; recordings from two SfN annual meeting workshops, including one about how to address the new NIH requirements for rigor and reproducibility; and a set of related resources.

SUPPORTING A DIVERSE COMMUNITY OF SCHOLARS

Because SfN strongly values diversity and global collaboration in neuroscience, the Society strives to support scientists from around the world with programs to aid in their professional development. SfN’s longstanding Neuroscience Scholars Program (NSP), for example, offers underrepresented graduate students and postdoctoral researchers two years of mentoring, networking, professional skills development, and educational programming. To grow the value of the program, SfN hosted its first NSP hybrid conference, consisting of in-person and online participants, in July 2017. This new pilot event, “Preparing the Next Generation of Neuroscience Leaders,” provided NSP participants with two days of targeted programming on publishing, public speaking, creating a professional profile, grant writing, and finding funding opportunities.

The Latin American Training Program is another SfN effort aimed at the development of young scientists, who will contribute to future discoveries in the field. In 2016, LATP provided 128 early-career neuroscientists from Latin America and the Caribbean with invaluable online training and networking opportunities. Fifteen of these high-achieving young scientists were also selected to take part in a three-week, in-person scientific training course in which they attended classes led by respected neuroscientists, participated in laboratory exercises, and received training on professional development topics. LATP is primarily funded by the Grass Foundation, with additional support from the International Brain Research Organization (IBRO), SfN emeritus member John Simpson, each year’s host institution, and SfN.

SfN also encourages diversity in the field through the work of its Women in Neuroscience Subcommittee (WiNS). Among key activities this year were additional installments of the Increasing Women in Neuroscience Toolkits, which provide strategies to mitigate obstacles that female neuroscientists may face during recruitment, hiring, promotion, and evaluation. SfN released the third and fourth installments, “Improving Faculty Climate” and “Promotion and Tenure,” in spring 2017. The toolkits live on Neuronline with a collection of supplemental resources for supporting women in neuroscience.

“ The obstacles facing women in science who are applying for promotion and tenure can be daunting. Therefore, implementing effective strategies for improvement is key.”
— Tanea Reed, Associate Professor at Eastern Kentucky University and SfN volunteer who led the creation of the Promotion and Tenure Toolkit

The future of the field depends on current neuroscience trainees, and as such, the Society works to develop programming and resources to support younger members. For example, SfN is creating a series of Career Skills Toolkits to help trainees and early-career neuroscientists master the soft skills necessary for professional success. A newly convened working group conceptualized three toolkits on the topics of management and team building, communication, and personal performance.

The toolkits, specifically created for use by Institutional Program members (neuroscience departments and programs) and SfN’s chapter network, which comprises more than 150 chapters around the world, are housed on Neuronline and contain 30-minute, turnkey PowerPoint presentations, along with additional resources such as articles and case studies to spur discussion. The Leadership, Management, and Team Building Toolkit was released in spring 2017, and the others will follow at six-month intervals.