Despite the undeniable global impact of mental health issues, the societal stigma associated with them means less weight is often given to these problems than to other brain disorders. Globally, 23 million people suffer from schizophrenia, 44 million from bipolar disorder, and more than 300 million from depression. Still more suffer from anxiety, alcohol and drug abuse, and post-traumatic stress disorder. 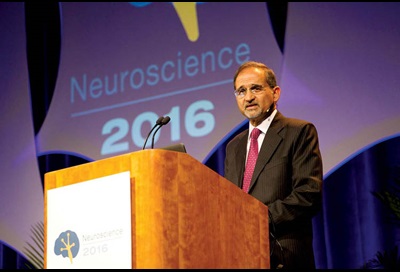 Mental health problems can lead to untimely death, especially for young people. Suicides account for 800,000 deaths a year, or one death every 40 seconds — more than malaria or breast cancer — and many mental and behavioral disorders typically arise during young adulthood. “It’s the young people who should be living a life free from disability, who should be contributing to society socially, economically. They carry the burden of mental disorders,” said Shekhar Saxena, director of the Department of Mental Health and Substance Abuse at the World Health Organization (WHO).

Neuroscientists have a role to play in making mental health a priority and seeking solutions to society’s global mental health challenges, Saxena said during his Neuroscience 2016 Dialogues Between Neuroscience and Society Lecture, “Global Mental Health and Neuroscience: Challenges and Opportunities.” Because it is naturally intertwined with mental health, neuroscience has far-reaching potential to contribute to prevention and treatment of mental disorders and promotion of mental health.

"There has to be a better balance between discovery and translation into practice of what we know." — Shekhar Saxena, Director, Department of Mental Health and Substance Abuse, World Health Organization

“There is a large gap between the burden and the budget,” Saxena said. “Even high-income countries devote only 5.1 percent of their … total health budget [to] mental health, and this proportion goes down very rapidly as we go from upper-middle to lower-middle to low income.” On average, low-income countries allot only 0.5 percent of their already limited health budgets to mental health.

Yet mental health disorders perpetuate and incur enormous costs: According to a study conducted by the World Economic Forum at the Harvard School of Public Health, costs associated with treatment of mental illness amounted to $2.5 trillion in 2010 and are expected to reach $6 trillion by 2030.

Saxena believes collaboration — institutional, national, and international — is the way forward, and he touted two efforts in this vein:

Saxena emphasized the strong need for increased interdisciplinary collaboration between neuroscience and mental health. “I still see separate departments, separate journals, separate conferences, and separate funding sources. How long will we continue with that?” he said. “The collaboration seems to be improving, but much more is needed, not only in a few countries but in all countries.”

Furthermore, collaboration must become more inclusive, as even positive collaboration efforts often leave many groups out of the decision-making process. “More than 90 percent of scientific studies are from and about high-income countries,” Saxena said. “This can be — and is — a real impediment to science.”

Above all, he noted that improved communication could help to attain increased public, private, and philanthropic investment in mental health and neuroscience initiatives. Citing prioritization of research investment through a focus on public health, Saxena noted the importance of increasing public awareness of the power of brain research to find solutions to mental health problems. “There has to be a better balance between discovery and translation into practice of what we know,” he said.