Society for Neuroscience - NeuroGrid: A Powerful Tool for Basic Research

Of the approximately 50 million people worldwide who suffer from epilepsy, as many as 40 percent cannot quell their seizures with daily medication. In such difficult cases, brain surgeons can attempt to excise the source of the trouble while inflicting minimal damage on the rest of the brain. Identifying the area of neural tissue that is generating the abnormal signals that spread and cause seizures, however, is often a challenge.

The current approach is to surgically place arrays of electrodes on the surface of the brain or even to sink wire electrodes into the cortex in order to track and map neural activity. Although surface electrodes are mounted onto flexible material and the wires of penetrating electrodes are fine, these implants can irritate the patient’s brain over days of neural recording in the hospital.

Neuroscientist and past Brain Prize winner György Buzsáki sought a better approach to long-term recording of brain activity from inside the skull. Intrigued by the possibilities offered by electrodes made from soft, conducting polymers, he recruited Dion Khodagholy, an electrical engineer who was working with one of the leading investigators of this new material, to join his research group at New York University School of Medicine. 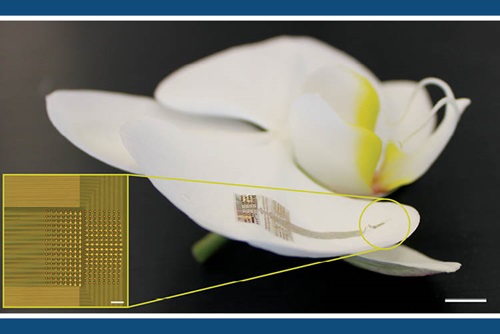 The team developed a new neural recording device that is thinner than plastic wrap and easily conforms to the undulating shape and pulsing surface of the human neocortex. Called NeuroGrid, the device is composed of tiny electrodes made from the polymer PEDOT:PSS. A sheet a little larger and much thinner than a standard U.S. postage stamp can hold 240 electrodes. The new device could even be tucked into grooves in the brain to reach areas inaccessible with the thicker and more rigid surface electrodes currently in use.

NeuroGrid captures the electrical activity of nearby brain cells, which surgeons rely on for mapping healthy and diseased neural tissue. In trials with patients undergoing surgery for epilepsy, NeuroGrid successfully recorded characteristic electrical patterns associated with particular anesthetics as well as an expected quieting of neural activity following aberrant discharges associated with epilepsy.

Because the polymer electrodes and connected gold and platinum wire are all embedded in a thin film of parylene, a biocompatible material already approved and used for long-term medical implants in humans, NeuroGrid can be left in place to monitor activity over time. So far, NeuroGrid has been used to record activity for up to 30 minutes during surgery in the brains of seven patients, and for as long as 10 days in rats. Future versions could possibly be left in place for even longer periods in a “closed loop” system designed to detect and respond to pathological patterns or to read neural activity for the purpose of controlling a brain-machine interface, such as a robotic limb.

Because of the small size of the NeuroGrid electrodes (25 micrometers, or about the size of an individual neuron), they can be placed more closely together than their metal counterparts can be. They’re clustered tightly into groups of four called tetrodes that are sometimes able to pick up signals from the same neuron. By comparing signals arriving at each component of a tetrode, the team can tease apart the electrical activity of multiple individual neurons and match their activity with more widespread patterns of electrical signals.

“We have shown that NeuroGrid recordings can be as good as those from existing devices. They provide the same information to the neurologist, with less discomfort to the brain. The patient will benefit.” — György Buzsáki, Biggs Professor of Neuroscience at New York University School of Medicine

The next iterations of NeuroGrid will be packed with more electrodes — up to a thousand in high-density islands — in order to increase the resolution of the recordings, Buzsáki said. With higher resolution, diagnosis of the focal points of seizures could be even more precise.

NeuroGrid is among the new technologies funded by the Brain Research through Advancing Innovative Neurotechnologies (BRAIN) Initiative, which aims to bridge scales from atoms to behavior to reveal how cells and circuits interact at the speed of thought. Future experiments with NeuroGrid could eventually help to link the activity of single cells to brain function, leading to a more comprehensive understanding of how the activity of individual neurons contributes to collective brain dynamics including perception, thought, and action.