Society for Neuroscience - Educating and Engaging the Public

As science faces unprecedented scrutiny, the need to “explain the brain” grows ever more urgent to ensure that citizens around the world continue to support investment in neuroscience research.

SfN provides multifaceted and engaging opportunities for nonscientists to learn about the field and the latest developments and discoveries. From participating in Brain Awareness Week and science education conferences to crafting compelling content for BrainFacts.org, SfN is building the awareness and respect for neuroscience that fuels the promise of the field.

TELLING THE STORY OF NEUROSCIENCE THROUGH BRAINFACTS.ORG 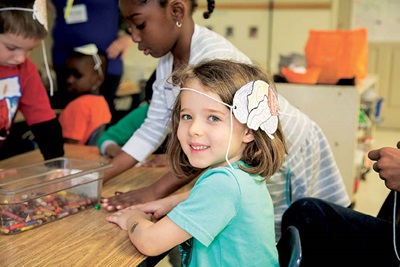 BrainFacts.org, a public information initiative of The Kavli Foundation, the Gatsby Charitable Foundation, and SfN, has attracted substantial interest since its launch in May 2012, demonstrated by its more than 7.5 million users and 14.5 million page views. In 2017 alone, the site experienced a 7 percent increase in active engagement compared to the previous year. Reaching a global audience, 44 percent of its users come from outside the United States, with the largest share from the United Kingdom, Canada, India, Australia, the Philippines, Brazil, South Africa, Pakistan, and Malaysia, respectively.

Building upon such widespread interest, SfN launched a redesigned BrainFacts.org in October 2017 after more than a year of planning. This reimagining of BrainFacts.org engages users in a self-directed journey through the brain and nervous system. With significant strategic funding support from SfN Council, the BrainFacts.org relaunch focused on enhancing content delivery and storytelling in order to present an inclusive, educational account of the narratives behind neuroscience. In addition, thanks to grant support from the Wellcome Trust, site visitors now have the opportunity to explore an interactive 3-D model of the human brain and to discover “Neuroscience Core Concepts” — the fundamental principles that everyone should know about the brain and nervous system — through animations and interactive elements.

“ Neuroscience touches people’s lives. It’s not this arcane subject matter that is inherently difficult to explain. You just have to make the effort to move past the jargon and explain why they should care.”
— John Meitzen, Assistant Professor at North Carolina State University and winner of the 2016 Next Generation Award for his outstanding public outreach contributions

In FY 2017, the BrainFacts.org audience most sought out information on brain anatomy and development. A video produced from a Brain Awareness Week webinar titled “The Human Brain” was the most accessed content, followed by a Research & Discoveries publication on neurogenesis and the Brain Basics Quiz, an SfN staff–produced educator activity. BrainFacts.org continues to promote content from its well-respected content partner institutions and organizations and secured three additional content partners in FY 2017: Howard Hughes Medical Institute, RIKEN Brain Science Institute, and Knowing Neurons, a neuroscience education website.

With ongoing support from founding partners, The Kavli Foundation and the Gatsby Charitable Foundation, BrainFacts.org continued to develop captivating narratives, images, graphics, videos, animations, and exciting interactives about the wonders of the brain.

CONNECTING WITH THE PUBLIC AROUND NEUROSCIENCE

Now more than ever, it is important for SfN and its members to reach out to and engage with non-scientists in local communities. These personal connections are an effective way to help people understand the importance of neuroscience research and how it improves lives.

Brain Awareness Week (BAW), launched 20 years ago by the Dana Alliance for Brain Initiatives, brings together scientists, students, and communities for an annual global celebration of the brain. SfN provides resources to local chapters, schools, and scientists interested in organizing educational events during this week and throughout the year. For BAW 2017, SfN hosted a webinar on BrainFacts.org demonstrating how the brain reacts to the environment through our senses. This webinar not only directly engaged the public to increase brain knowledge but can also be used as a teaching tool when SfN members do their own outreach.

Additionally, SfN directly encourages public interest in neuroscience through support for the Brain Bee and Brain Awareness Video Contest. SfN hosts the DC Regional Brain Bee each year as well as provides support to the U.S. and World Brain Bees, including organizing laboratory internships for the winning students. For SfN’s video contest, participants create engaging videos that make a facet of neuroscience more accessible to the public. The first place winner receives a free trip to SfN’s annual meeting, and all of the winning videos are available on the BrainFacts.org YouTube channel.

In addition, SfN members and staff traveled around the U.S. to leverage opportunities for neuroscience education at in-person conferences. At the National Science Teachers Association conference, SfN’s neuroscientist volunteers demonstrated hands-on activities and distributed resources for teachers to bring neuroscience to K-12 classrooms. While there, SfN also sponsored a workshop, “How the Teen Brain Learns,” to increase educators’ understanding of the mechanisms of learning and memory. At Family Science Days, hosted by the American Association for the Advancement of Science, SfN volunteers connected with teachers, families, and the science-interested public by demonstrating some of the BrainFacts.org educator activities, which are free and open for SfN members to use in their own outreach events.