The Society for Neuroscience prides itself on the ability to leverage its financial strengths to invest in the future of the neuroscience field. Throughout FY 2017 SfN continued to emphasize the importance of enhancing its mission to support the scientists who conduct, teach, and advocate for neuroscience research.

SfN finished FY 2017 on a positive note, generating a net operating surplus of nearly $2 million before investment income. Moreover, this accomplishment was achieved after adding a robust set of initiatives in the form of the Strategic Opportunities Fund. Of SfN’s major revenue drivers, the annual meeting and scientific journals continued to provide strong revenues, while membership revenue and income from the SfN headquarters building remained strong. SfN’s revenue exceeded $32 million in FY 2017. Dedicated financial planning by the SfN Council allows the Society to maintain a reserve portfolio, which surpassed $71 million as of June 30, 2017. 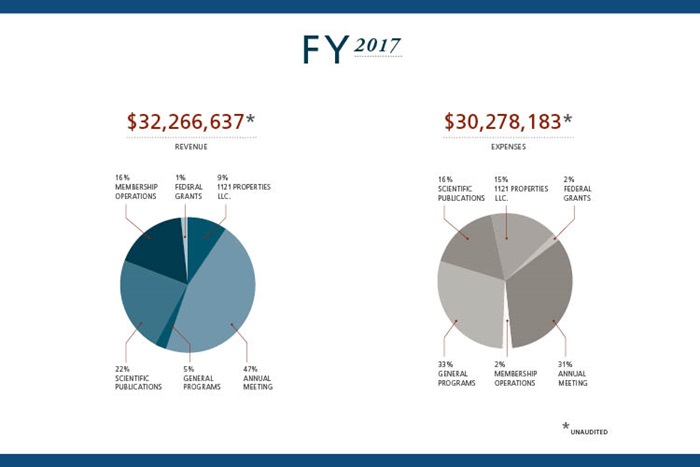 The Society actively invests in strategic programming that engages and supports its members worldwide. To that end, in summer 2016, the SfN Council created the Strategic Opportunities Fund to invest in high-level, high-visibility projects that enhance value for SfN members. Council has dedicated $5.5 million over a three-year period (FY 2017-19). Leadership identified five primary areas as initial priorities for strategic investment in the first year of the fund. Each year SfN will re-evaluate the areas and allocated funds based on strategic priority and the potential for reach and impact for the Society and the field.

Acknowledging challenging economic times for scientists, the SfN Council dedicated $100,000 for Trainee Professional Development Awards for young scientists interested in attending Neuroscience 2017, in Washington, DC. This infusion of funds allowed SfN to double the number of trainee awards to more than 200. These awards provide promising young researchers from around the world the opportunity to present a scientific abstract, meet peers and network with senior scientists, and participate in the wealth of learning at the annual meeting. Recipients receive complimentary registration, along with a $1,000 award for recipients based at North American institutions or a $2,000 award for those outside North America.

MAINTAINING GROWTH INTO THE FUTURE

Looking forward to FY18, in the second year of its Strategic Opportunities Plan, the Society will continue to realize innovative programs that serve members and the global neuroscience community. SfN will invest in tools and infrastructure to support its venues for scientific exchange, program development, and communications activities, with an eye toward increasing member engagement and value. SfN’s leadership maintains a forward-looking vision for responsible growth while continuing to engage in thoughtful future investment discussion, allowing the Society to continue its mission of advancing the understanding of the brain and nervous system.