Society for Neuroscience - Advocating for the Field

Advocating for the Field

In the face of an uncertain political environment in the United States and around the world, the international scientific community has banded together to communicate the importance of robust funding for research.

Without predictable and substantial government investment in biomedical research, scientific advancement and the resulting progress toward solving public health problems would not be possible. To ensure continued progress, the Society for Neuroscience and its members dedicated significant time and resources in FY 2017 to expanding advocacy efforts that inform policymakers and the public about the economic and societal benefits that directly result from robust funding of biomedical research. 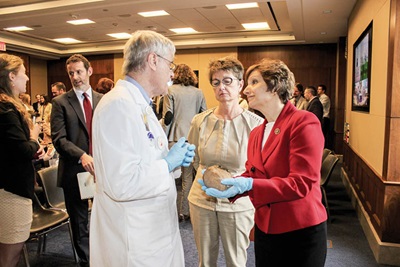 U.S. Rep. Suzanne Bonamici studies a brain during a neuroscience event on the Hill.

In the U.S., targeted advocacy efforts by SfN and many partner organizations aided in securing strong congressional support for biomedical research. When Congress passed the FY 2017 federal budget in May, the National Institutes of Health, the largest funder of biomedical research in the world, saw a $2 billion increase in its budget, to $34.1 billion.

Looking forward, SfN will continue to engage in advocacy efforts that urge Congress to sustain its strong investment in biomedical research and reject any proposed cuts to this important work.

Recognizing SfN members’ desire to engage in advocacy during this unique period, the Society strategically invested in significantly expanding its efforts in FY 2017, with a specific focus on growing a strong advocacy presence in key geographic areas. As the first phase in a long-term plan, the Society began working directly with SfN members in six locations: New York, Houston, San Diego, Baltimore, southwest Ohio, and Lehigh Valley in Pennsylvania. These areas represent congressional districts or states that are hubs for biomedical research, have lawmakers from both parties on committees that deal with science-related issues, and/or already have an active neuroscience advocacy community.

“There has never been a more important time to improve our science communication skills. Even if it’s just one conversation, we should all make an effort to step away from the sidelines and share our work.”
— Michael Wells, SfN Early Career Policy Ambassador and Postdoctoral Fellow at the Broad Institute of MIT and Harvard University

The Society worked with leading scientists in these areas to identify, recruit, and mobilize other local SfN members to promote neuroscience research and cultivate relationships with lawmakers, with the goal of creating a stable of champions for neuroscience and biomedical research within Congress. Local members in these areas have met with elected officials and their staff, hosted lab tours, and written op-eds to voice their support for neuroscience research. In the future, SfN will continue to add more targeted locations and to partner with local members to grow SfN’s grassroots base.

Grassroots advocacy leaders and SfN’s Early Career Policy Ambassadors (ECPA) were among the 40 SfN members who attended the Society’s 11th annual Capitol Hill Day in March 2017. They visited 54 congressional offices in Washington, DC, to share the importance of their neuroscience research with lawmakers and to advocate for strong federal funding for biomedical research.

Michael Wells, one of 10 participants in SfN’s yearlong ECPA program that educates early-career researchers about science policy and how to become effective advocates, successfully spread the reach of this year’s event well beyond Capitol Hill. Wells, a postdoctoral fellow at the Broad Institute of MIT and Harvard, took over the Twitter handle of Passion Pit, a band whose account boasts more than 227,000 followers. Thousands of people joined the Twitter discussion about mental health issues and the importance of science research funding.

In the first six months of 2017, SfN crafted a record number of advocacy-related statements, op-eds, articles, and letters, demonstrating to its members that the Society is in alignment with their desire for increased focus on and commitment to policies that support science. In addition to releasing statements urging robust federal funding of biomedical research, SfN joined the Federation of European Neuroscience Societies (FENS) and the International Brain Research Organization (IBRO) in a statement opposing the administration’s immigration executive order, stating that it poses a threat to the advancement of the scientific enterprise, which is made stronger when scientists around the globe engage with one another.

“SfN, IBRO, and these other organizations play a critical role in the coordination, the sharing of knowledge and information, so that individuals in different countries don’t try to reproduce the wheel. We learn from each other, and we exploit that and build on that and science moves faster.”
— Douglas Munoz, SfN Government and Public Affairs Committee Member and Professor at Queen’s University in Canada

SfN also endorsed the March for Science, alongside partners FENS, IBRO, and the American Association for the Advancement of Science (AAAS). During this unprecedented global event on April 22, 2017, SfN members joined more than 1 million marchers at over 600 events across 66 countries, bringing into the public eye the essential role of scientific research and global scientific collaboration for human health and progress.

SfN also continued its efforts to promote the responsible use of animals in research, including hosting a dynamic panel at Neuroscience 2016 on how to engage institutions in publicly communicating about animal research and providing comments underlying the recent final opinion from the European Commission’s Scientific Committee on Health Environmental and Emerging Risks (SCHEER) on the need for nonhuman primates in biomedical research.

In addition to the joint efforts with SfN’s international advocacy partners outlined above, the Society continues to participate in IBRO’s Global Advocacy Initiative and to support Global Advocacy Seed Grants, which have provided nearly $131,000 to neuroscience groups across the globe over the past two years to help fund local events that increase awareness of and support for neuroscience in ways that are culturally sensitive and regionally relevant.