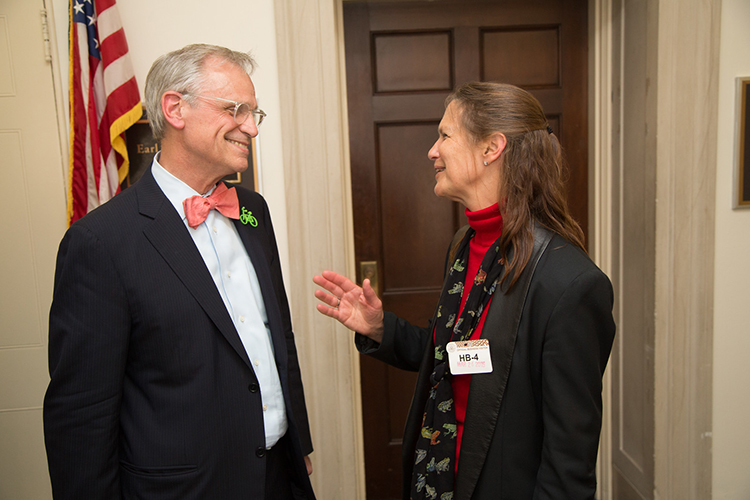 Did you know there’s a group of U.S. lawmakers on Capitol Hill dedicated to supporting the field of neuroscience? The Congressional Neuroscience Caucus, formed in 2010, raises awareness about neuroscience-related issues through briefings and other activities. Founded and co-chaired by Reps. Cathy McMorris Rodgers (R-WA) and Earl Blumenauer (D-OR), the caucus is preparing for a productive year in 2016.

“We started the caucus to build awareness of the intrinsic role brain research plays in understanding ourselves and our society and to help inform federal policy,” Blumenauer said. “Most of us will be impacted by a brain disease or disorder at some point, and the more lawmakers know about the breakthroughs that are happening right now, the better their policy decisions will be.”

The caucus has held 17 briefings on subjects such as exercise and the brain, neurodegenerative diseases, traumatic brain injuries, basic science, and recent neuroscience discoveries. Sometimes the briefings focus on a piece of important policy, such the BRAIN Initiative, or they relate to a recent event, such as a briefing exploring the relationship between mental illness and violence held shortly after the Sandy Hook shooting in December 2012.

At a recent briefing on the developing brain, Lisa Freund, chief of the Eunice Kennedy Shriver National Institute of Child Health and Human Development at NIH, and Frances Jensen, professor and chair of the Department of Neurology at the University of Pennsylvania’s Perlman School of Medicine, explored the fundamental differences between the growing and developed brain in a way that was understandable by lawmakers and their staff. They also touched on topics relevant to policy, such as the need for interventions early in life for disadvantaged children and how children and young adults should be treated within the justice system.

“This topic is personal to everyone,” said Katie Sale, executive director of the American Brain Coalition and moderator of the event, noting that brain health and function touches nearly every facet of society. “The briefings are a great way to showcase the science of today.” The American Brain Coalition, the Society for Neuroscience, and dozens of other groups have co-sponsored the caucus briefings, providing financial and logistical support and speaker suggestions.

The caucus also plays an important role in SfN’s annual Capitol Hill Day. Often, caucus members will speak to Hill Day participants, hold a briefing, or take meetings with neuroscientists to discuss important funding issues. Greg Bissonette, an SfN Early Career Policy Fellow who attended last year’s Hill Day said, “hearing from a member of the Neuroscience Caucus before heading out on my Hill Day meetings gave me extra confidence that these topics are important to lawmakers.”

Go to the American Brain Coalition website to find out whether your representative is a member of the Congressional Neuroscience Caucus. If they aren’t, invite them to join.