Inside Neuroscience: New Ways to Study the Brain 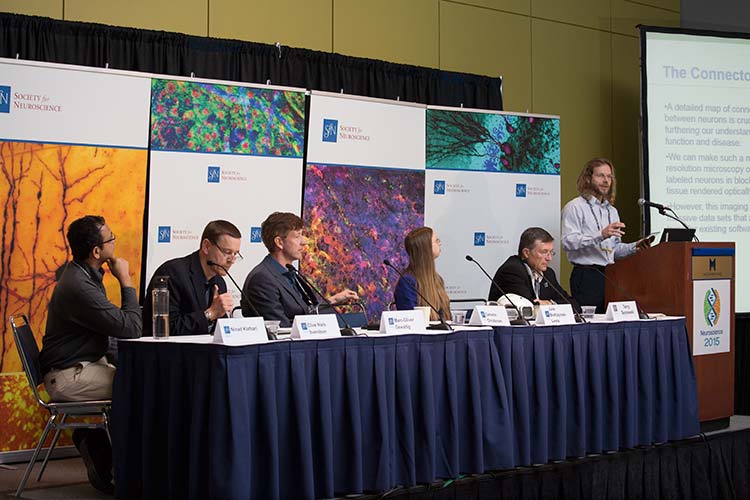 During a press conference on new technologies and big data at Neuroscience 2015, researchers unveiled some of their latest innovations, ranging from more detailed models of the brain to novel ways to study human disease using stem cells.

Spurred in part by the U.S. BRAIN Initiative and similar projects worldwide, recent advances in computer software, imaging techniques, and molecular methods are revolutionizing neuroscience. During a press conference on new technologies and big data at Neuroscience 2015, researchers unveiled some of their latest innovations, ranging from more detailed models of the brain to novel ways to study human disease using stem cells.

“The tools and techniques that are being developed are giving us an unprecedented view into the function of the brain as it is working in the real world,” said Terry Sejnowski, a computational neuroscientist at the Salk Institute for Biological Sciences and moderator of the session.

Existing tools to study the brain can either create images of structures deep within the brain with high resolution or they can record the brain activity of moving subjects. But they can’t do both at the same time.

Magnetic resonance imaging (MRI), for example, requires subjects to remain completely still in order to capture highly detailed images of brain structures. On the other hand, electroencephalography (EEG) allows subjects to move but only picks up surface signals.

MRI doesn’t allow researchers to study natural behaviors and that doesn’t permit researchers “to really view someone playing the piano, or painting a picture, or engaging in a social task where you laugh and cry,” said Julie Brefczynski-Lewis, an assistant professor at West Virginia University. In fact, when researchers use MRI to study what happens in the brain during laughter, they train subjects to imagine laughing but to keep very still. A more portable scanner would allow researchers to image and study the brain under more natural conditions.

To that end, Brefczynski-Lewis, Stan Majewski, and their team, with support from a BRAIN Initiative Next Generation Human Imaging Award and a grant from the National Institute of Mental Health, built a helmet containing a ring of small positron emission tomography (PET) detectors. Called the AMPET (Ambulatory Microdose Positive Emission Tomography), the helmet can provide high-resolution images of deep brain structures in subjects while they’re upright and moving, whether they’re engaged in everyday activities like socializing, or learning to walk again during stroke rehabilitation. Brefczynski-Lewis even wore a prototype of the scanner during her presentation, showcasing its portability.

As imaging techniques improve, probing deeper into the brain at higher resolutions, the resulting datasets become exponentially larger. “Our datasets are far too large for any existing axon imaging and reconstruction software to handle,” said Cameron Christensen, a computer scientist from the University of Utah.

In order to visualize and analyze such large datasets, Christensen devised a new way to use software called ViSUS (Visualization Streams for Ultimate Scalability). Originally created by Valerio Pascucci of the University of Utah Scientific Computing and Imaging Institute, the software had never before been used for microscopy. ViSUS quickly sorts data and makes representative images available almost instantly. The software is designed to handle large datasets, such as stacks of two-dimensional and three-dimensional images, and it uses less memory by streaming images at low resolution before they are fully downloaded. Researchers can then zoom in on areas of interest to look at the high-resolution images.

“This type of technology is really necessary for studying larger brains such as humans and nonhuman primates,” said Alessandra Angelucci, professor of ophthalmology and visual science at the University of Utah and the primary investigator of the project. “Now we can work with brain volumes of unprecedented size.” The work was supported by funding from the National Institutes of Health, the National Science Foundation, and Research to Prevent Blindness.

As scientists collect datasets from imaging studies, they can use the information to create models that simulate brain-wide activity. Marc-Oliver Gewaltig of the Swiss Federal Institute of Technology in Lausanne developed a new semiautomatic workflow that combines data from several sources — including the Allen Brain Atlas and the Swiss Blue Brain Project — to create a more comprehensive model of the whole mouse brain, including both long-range connections between brain areas and local connections between individual neurons. The research was supported with funds from the Blue Brain Project and the European Human Brain Project.

The workflow is a computer program designed to integrate data from all brain regions, without experimental bias toward a particular brain region or animal species, Gewaltig said, allowing the process to be used for species other than mice. He also stressed that the process is iterative — as new data is fed into the workflow, the models will improve.

“If we have several datasets, they might all have shortcomings and advantages; integrating them will help us to come to a clearer picture of what is the norm and also what are pathologies,” Gewaltig said.

Clive Niels Svendsen of Cedars-Sinai Medical Center took skin cells from patients with amyotrophic lateral sclerosis (ALS) and spinal muscular atrophy and reprogrammed them into motor neurons — the type of cell affected in both diseases — that could then be fully tested and characterized. The stem cells provided a model for studying the diseases in unprecedented ways, including extensive imaging and analysis of DNA, RNA, and protein expression. The technique, supported with funds from the National Institute of Health, could be applied to any disorder by reprogramming the stem cells into the types of cells that die in that particular disease.

“This is a new platform to look at the brain in the petri dish and understand the concept of the disease,” Svendsen said.

While many technologies are focused on visualizing the brain in three dimensions, Ninad Kothari, Melville Wohlgemuth, and Cynthia Moss of Johns Hopkins University are interested in the reverse — understanding how the brain visualizes the world in three dimensions. Their research was supported with funds from the National Science Foundation, the Air Force Office of Research, and Human Frontiers.

Using wireless technology, Kothari and Wohlgemuth recorded the brain activity of bats in flight. Bats make ultrasonic calls and use the echoes from these calls to detect the location of objects. They had the bats navigate around a room to find a food reward and recorded the sounds the bats made, the echoes they heard, and the subsequent firing of neurons in the superior colliculus, a brain region that integrates sensory information. By combining the echoes and the neural recordings, Kothari created an “echo model” that represented how the bats’ brains detected objects in order to make a map of the three-dimensional space.

“Understanding this in a highly specialized mammal that echolocates can help us understand principles of the representation of 3-D space,” Kothari said. “And these principles can then be extended to other animals, primates, and even humans.”

Many of the scientists noted how funding from the U.S. BRAIN Initiative supports their research and is opening the door to the development of other exciting new tools and technologies. The next few years promise to bring advances in how scientists image and model brains, process the resulting data, and apply the findings to understanding healthy and diseased minds. “It’s really a wonderful time for neuroscience,” Sejnowski said. “I think that we’ve entered the golden age.”