Society for Neuroscience - Inside Neuroscience: The Brain’s Immune System and Neurodegenerative Disorders

Inside Neuroscience: The Brain’s Immune System and Neurodegenerative Disorders 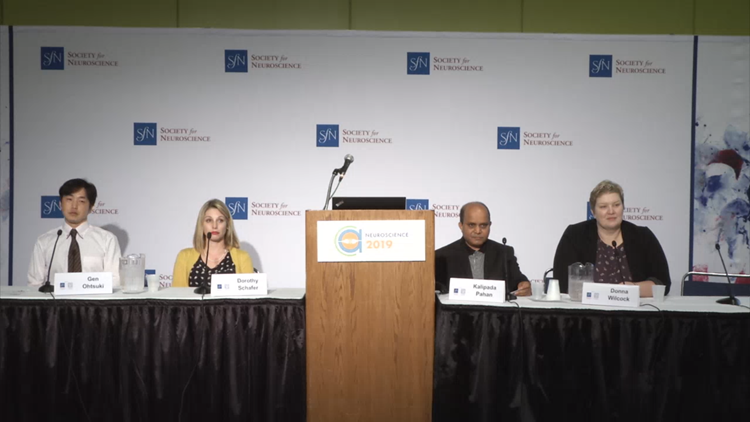 That which is tasked with keeping us safe can, when induced, instead cause significant damage. Our immune system protects us from innumerable outside threats, but too frequently becomes one of the body’s more dangerous foes. The brain is no exception.

In the work to understand and treat neurological disorders like Alzheimer’s disease (AD) and Parkinson’s disease, researchers have identified neuroinflammation as an important factor. Microglia — immune cells in the brain — have been in particular focus lately as they become a lead target of study for a number of brain disorders.

Microglia are responsible for a wide variety of functions, from synaptic pruning (removal of synapses and brain connections to increase efficiency) to neuronal plasticity (the brain’s ability to grow and adapt). When disordered, however, they can cause cell death of functional, healthy cells. The connection between microglia, inflammation, and illness is the focus of ongoing neuroscience research.

Donna Wilcock, professor at the department of physiology and Sanders-Brown Center on Aging at the University of Kentucky, says, “I like to think of microglia as the ‘Swiss Army knife’ of the brain.” She spoke as the moderator at a Neuroscience 2019 press conference titled “Self Sabotage: The Role of the Immune System in Neurological Disorders.” Researchers brought new insights into microglial function and behavior, particularly pertaining to their malfunction, in the hope that this work may move the needle towards treatment in human patients. 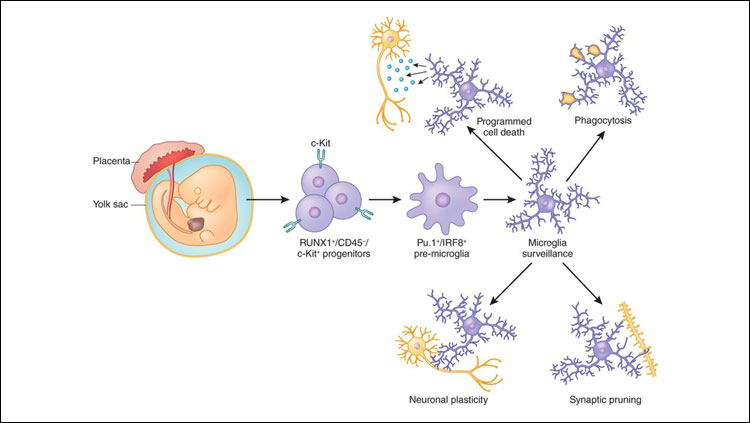 Derived from the yolk sac, microglia play many important roles in the brain. Credit: Donna Wilcock.

Rodent models of AD were fed aspirin daily for a month, which created a pathway for anti-inflammation in the brain. The aspirin stimulated IL-1RA through a protein called peroxisome proliferator-activated receptor alpha (PPARα) that is usually found in the liver and is important for lipid metabolism. Without PPARα, aspirin did not stimulate IL-1RA or create anti-inflammatory glial cells in the brain.

Press conference speaker Kalipada Pahan, Floyd A. Davis, MD, endowed chair in neurology, and professor of neurological sciences, biochemistry and pharmacology at Rush University explained the impact for potential future study in human models. He said, “Low-dose aspirin may be beneficial to suppress inflammation, to lower plaque, also to improve memory — if [patients] have PPARα in the brain.” Thus, this receptor may serve as a missing link between aspirin and anti-inflammatory glial function.

Microglia are critical components of neural circuits — particularly the necessary act of pruning synapses in the young, developing brain. However, early synapse loss is also a symptom of neurodegenerative diseases. Thus, researchers at the University of Massachusetts Medical School asked the fundamental question: are microglia working in error to prune healthy synapses in these diseases?

Researchers removed whiskers from a rodent model and studied the synapses that controlled those whiskers. They observed that microglia “ate” synaptic connections that were no longer being used — except in cases where a receptor, CX3CR1, was blocked. Blocking the receptor actually prevented microglial pruning and subsequent synapse loss in the rodent brain.

Presenting her lab’s work during the press conference, Dori Schafer, assistant professor in the department of neurobiology at the University of Massachusetts Medical School, said, “Our next steps are to identify if we can manipulate these mechanisms in neurodegeneration and prevent, for example, early synapse loss that could actually lead to cognitive decline in patients.”

Inflammation in the Cerebellum and Brain Disorders

The brain’s cerebellum is more than just the center of motor coordination. Researchers at the Kyoto University Graduate School of Science wondered whether the cerebello-cortical connection (the connection between the cerebellum and the rest of the brain) was related to brain disorders including autism spectrum disorder, schizophrenia, mood disorder, and attention deficit hyperactivity disorder.

By injecting a lipopolysaccharide into a rodent model’s cerebellum, researchers saw that the resulting behavior included decreased motivation, movement, and sociability — symptoms described as depressive- and autistic-like. Researchers discovered that the microglia were activated in the process of inflammation in the cerebellum, which triggered this hyperexcitability in the rest of the brain. By suppressing the microglia and accompanying cytokine, which acted as a signaler to the synapses, normal behavior was recovered.

In describing his work, Gen Ohtsuki, associate professor at The Hakubi Center for Advanced Research at Kyoto University, said, “We showed a functional connectivity between the cerebellum, its inflammation, and other brain regions.” Thus, the results suggest a connection between inflammation in the cerebellum and neurological and developmental disorders via microglia.

In the question and answer portion of the press conference, the panel tackled new research on triggering receptor expressed on myeloid cells 2 (TREM2), which is a recently studied gene that almost exclusively impacts microglia. It’s theorized that having the gene may aid in memory via microglia, and the existence of certain rare variants of the gene greatly increases the risk of AD. This goes even further to establish the correlation that microglial activity is strongly connected to the disease. 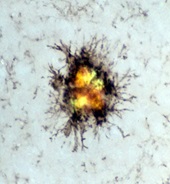 In AD, microglia surround the amyloid plaques and may clear the amyloid under the right conditions – as is the case with some immunotherapy drugs targeting the disease. Credit: Donna Wilcock.

Yet, the exact understanding of microglia and their function (particularly when they are not working in a normal way) is still being determined. This research is more clearly illuminating the exact interplay between microglia and different regions of the disordered brain. Knowing the purpose of microglia can also help researchers determine how to control them in the service of potentially mitigating neurological diseases and disorders in humans.

In the progression of AD, for example, Wilcock explained, “We think that if we can reprogram these microglia, we may be able to drive them to phagocytose [clean] the plaque and improve Alheimer’s pathology.” The potential for these treatments is immense.

Wilcock added, “I think we’re going to see a big movement over the next few years in immune modulatory drugs for many neurological conditions.”