To celebrate SfN’s 50th anniversary, each 2020 issue of Neuroscience Quarterly will delve into the science behind one of SfN’s four Mission Pillars – statements of the Society’s strategic goals.

A critical part of SfN’s Mission Pillar “Advancing Scientific Exchange” is bringing together scientists of diverse skillsets and backgrounds through collaboration. This article explores the neuroscience behind an elusive phenomenon called “team flow” and how leaders can promote it within their teams.

Athletes call it being “in the zone,” scientists call it flow: the moment when everything clicks in an effortless rhythm and the sense of time and space is lost. This phenomenon can be experienced by anyone engrossed in a task and may lead to creative and performance breakthroughs as well as increased well-being. Recently, neuroscientists have uncovered similar benefits and unique neural correlates of another kind of flow — team flow — with relevance to collaborations in and out of the lab.

“Surgeons say that during a difficult operation they have the sensation that the entire operating team is a single organism, moved by the same purpose.”


Team flow occurs when members of a group such as coworkers, athletes, or dancers work together towards a common goal. “Surgeons say that during a difficult operation they have the sensation that the entire operating team is a single organism, moved by the same purpose,” wrote Mihaly Csikszentmihalyi, the psychologist recognized for identifying and naming the phenomenon of flow (1). “All involved share in a feeling of harmony and power.” Team flow has potential to be more powerful than individual flow, leading to group performance improvements and individual benefits including lower rates of depression, panic attacks, and anxiety among team members.

Despite team flow being of interest to many leaders, coaches, and principle investigators, it has not been studied as extensively as individual flow. Fortunately, neuroscientists are now starting to examine the elements, benefits, and neural activity of the phenomenon.

Until recently, there was no tool to measure team flow. So Jef van den Hout, a researcher at Eindhoven University of Technology in the Netherlands, set out to create one.

Van den Hout then created a questionnaire, the Team Flow Monitor, based on these eleven elements and tested it on ~100 teams. Team flow was correlated with individual happiness, improved performance, and feelings of positivity within the team. Employees experience a more positive work environment when team flow is present.

Van den Hout’s results offer guidance for those hoping to promote flow within their own teams (3). Leaders should focus on meeting the prerequisites for team flow by, for example, encouraging lab members and collaborators to agree on a common goal, communicate openly, and not fear failure. Teams can use the Team Flow Monitor to see which elements may be missing from their team culture. The absence of team flow may also be a useful warning sign of team dysfunction before other signs, such as poor performance or loss of motivation, appear.

Searching for the Source of Team Flow Sensation 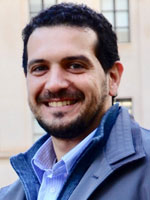 To study team flow in the brain, Shehata hired music students familiar with music rhythm video games such as Guitar Hero. Participants were paired according to music preference and skill level to form 20 teams of two players, with each team playing in three conditions:

“It is a wonderful experience if you are in individual or solo flow, but it’s much more so when you are in a team working together.”

Each player performed six songs in each condition while hooked up to an electroencephalogram (EEG). A clear signal immerged in the left temporal lobe specific to the team flow condition, a region involved in integrating information from other brain areas.

The brains of team members in flow also seemed connected: in relevant brain regions, one player’s neurons would fire in sync with a teammate’s neurons. This synchronicity may be where the sense of flow originates, suggests Shehata.

“It is a wonderful experience if you are in individual or solo flow,” said Shehata. “But it’s much more so when you are in a team working together.”

In the era of team science, team flow offers a way to increase the pace and quality of discovery to any research team able to achieve it.