As part of SfN’s 50th anniversary celebration, JNeurosci has released a special 50th Anniversary collection looking back at the remarkable progress that has been made in the field over the past five decades. To best reflect the Society’s history and future, the collection features authors ranging from those who attended SfN’s first annual meeting to current neuroscience trainees.

Diverging and Converging Paths: The Growth of a Neuroscience Community

The manuscripts cover a broad range of topics, from the advancement of molecular biology technology to the evolution of our understanding of the hippocampus and explosion of new sensory research. Across the collection, however, one theme becomes clear: the evolution of a field becoming intricately linked together, even as it explores evermore distinct areas of research. 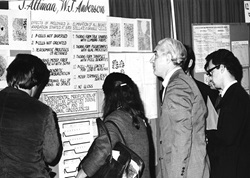 Attendees and poster presenters at the first annual meeting poster floor in Washington, D.C. Used with permission from SfN′s Archive.

“One thing I was surprised to learn was that Darcy Kelley, who wrote about neural mechanisms of vocalizations in frogs, presented a poster with Bruce McEwen about glucocorticoid receptors in the hippocampus at the first annual meeting. Meanwhile Huda Akil, who presented a poster on behavioral studies of analgesia at the first meeting, co-wrote the paper on glucocorticoids with Bruce McEwen.”

This collaboration between neuroscientists back in 1971 is only made more fascinating by the different, decorated careers these scientists would have, including both Akil and McEwen serving as SfN president in 2003 and 1997, respectively.

“It’s just interesting to see how some people’s paths diverge greatly, while others converge,” said Esch.

Much of the interconnectivity that drives new discoveries comes from the foundation of neuroscience as a separate field, in which SfN played a large role.

“What we now know as neuroscience could just as easily have remained fractionated into separate disciplines, each with its own society and separate meetings, with no unifying organization or annual meeting,” R. Douglas Fields writes in “The First Annual Meeting of the Society for Neuroscience, 1971: Reflections Approaching the 50th Anniversary of the Society's Formation.”

“What we now know as neuroscience could just as easily have remained fractionated into separate disciplines . . .”

R. Douglas Fields
in The First Annual Meeting of the Society for Neuroscience, 1971: Reflections Approaching the 50th Anniversary of the Society's Formation

“If that had occurred, one wonders how our present understanding of the brain might be different today. The challenge of understanding the brain, mind, behavior, and dysfunction cannot be met without bringing to bear the full arsenal of scientific power and technology in an attempt to comprehend it, from mathematics to psychology.”

Finding New Questions in the Past

Beyond showing the incredible growth of a field in a relatively short amount of time, revisiting the discoveries of the past has practical benefits for the present and future of neuroscience.

“There are many reasons to look back, as well as forward, in science,” JNeurosci Editor-in-Chief Marina Picciotto says about the collection. “The first is to remind ourselves about the foundation on which our current work rests.”

Often, revisiting foundational work can result in rediscovering questions that have been lost as the field adapts to rapidly developing technology and techniques.

“One unfortunate downside of the powerful new techniques is that they drive more and more researchers toward a few species (mice, Drosophila, zebrafish) and away from other fascinating systems like the vocal communication network described by Darcy Kelley and colleagues,” says Esch. Kelley and colleagues’ past and current work on the molecular mechanisms that produce different sounds in different species, she says for example, provides insight into the mechanisms of evolution.

“There is a great foundation for future work in this and other species, and I fear these foundations may be abandoned as more people turn their attention to the more genetically tractable species.”

Revisiting history can also provide a path to future research. Anna Christina Nobre and Freek van Ede’s article “Under the Mind’s Hood: What We Have Learned by Watching the Brain at Work” captures just how much there is left to explore. Opening with a discussion of the first brain lesion studies in the 1800’s, they then track the past 50 years of brain function research. The piece ends with a call for greater refinement of cognitive studies to reflect the complexity of behavior, and for a more interdisciplinary approach between studies of the mind, brain, and behavior.

“If our explorations have taught us one lesson, it is to remain open-minded.”

Anna Christina Nobre, Freek van Ede
in Under the Mind’s Hood: What We Have Learned by Watching the Brain at Work

The authors also call for approaching future advances with an open mind. “If our explorations have taught us one lesson,” they write, “it is to remain open-minded. Sometimes we tend to place too much value in our local interpretations and be overly dismissive of alternative or additional possibilities. This slows progress.”

This collection does more than reflect on SfN and the field; it sheds new light on discoveries and challenges that continue to define the field today. “Looking at the state of the neuroscience field 50 years ago, we can see what types of advances allowed us to move forward,” says Picciotto. “What technical advances have occurred? Where has there been a paradigm shift in how we think about neurobiological problems? How has what we study stayed the same, and how has it changed?”

By revisiting history, we can begin to speculate what the next 50 years of neuroscience research will bring.