For millennia, humans have employed opium and its derivatives to quell pain. Ancient societies around the globe cultivated opium poppies. To this day, opioids excel at tamping down the acute pain associated with surgery or severe injury.

For people suffering daily chronic pain, as an estimated 25 million Americans and 20 percent of people worldwide do, opioids may be ineffective while at the same time causing serious — even deadly — side effects. Unfortunately, the open-ended use of opioids to treat chronic pain — particularly in the U.S. — has fueled an opioid addiction epidemic.

In response to this rising epidemic, neuroscience researchers from around the world are working to develop new treatments for chronic pain.

“Tens of thousands of people who take opioids die every year, and so we need safer and more effective drugs for treating pain and related conditions.” — Bryan Roth, Michael Hooker Distinguished Professor at the University of North Carolina School of Medicine

“Tens of thousands of people who take opioids die every year, and so we need safer and more effective drugs for treating pain and related conditions,” said Bryan Roth, Michael Hooker Distinguished Professor at the University of North Carolina School of Medicine.

Opioids lessen pain by mimicking endorphins — neurotransmitters that bind opioid receptors in the brain and relieve pain. But side effects like respiratory depression, what kills people who overdose, and dependence, tolerance, and addiction — three separate but intertwined physiological effects — limit the use of opioids.

After one week of regular opioid use, all patients become dependent — they experience physical withdrawal including nausea and increased pain sensitivity if they stop taking the drug. Tolerance develops with longer-term use — the opioid dose that once relieved pain becomes inadequate, and the patient requires a higher dose. Addiction, or substance use disorder, is more complicated. People addicted to drugs seek the euphoric “high” that opioids produce and take them inappropriately, often at great risk including death by overdose. Interfering with the development of any of these side effects could save lives. 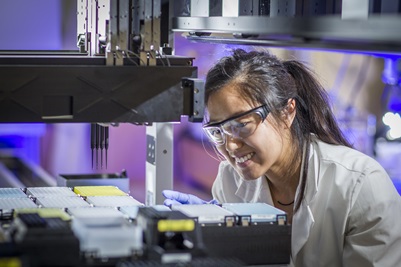 Roth’s group aimed to design pain relieving drugs without side effects. Opioids relieve pain by acting at four different receptors, including the mu and kappa receptors, which were discovered in the 1970s. Activating mu-opioid receptors relieves pain but risks addiction and respiratory depression. Drugs aimed at the kappaopioid receptor also relieve pain, but cause hallucinations.

Taking a different tack, Japanese research has focused on tolerance. A team led by Taka-aki Koshimizu of Jichi Medical University and Yukio Takano of Fukuoka University identified a molecular complex — comprising vasopressin 1b receptors, mu-opioid receptors, and beta-arrestin-2 — that not only heightens pain but accelerates morphine tolerance. Working with mice, the researchers disrupted the complex, slowing the development of tolerance without increasing pain. Drugs that break up this complex may reduce the amount of an opioid needed to treat pain by preventing tolerance. 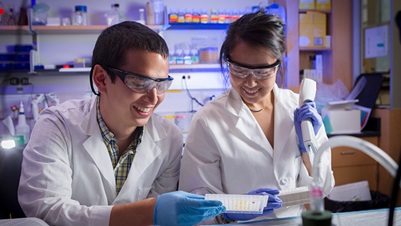 Teague Cole and Alice Jiang at the bench, in the Roth Lab at the University of North Carolina
Photo by Brian Strickland

For people dependent on opioids, stopping the drug outright means undergoing the muscle aches, nausea and vomiting, and diarrhea associated with opioid withdrawal. Tuan Trang, a researcher at the University of Calgary, in Canada, and his team explored the underlying causes of opioid withdrawal.

His team focused on microglia, specialized immune cells in the brain and spinal cord thought to be associated with opioid withdrawal. Working with rodents, the researchers blocked the pannexin-1 channel on microglia, alleviating the animals’ withdrawal symptoms. They also discovered that an anti-gout medicine called probenecid could block these channels, without affecting pain relief. Trang and his team are working to develop a clinical trial to test probenecid in humans.

The opioid crisis “must be addressed in a comprehensive, integrated, and strategic fashion,” Nora Volkow, director of the National Institute on Drug Abuse (NIDA), said, because it arises from interrelated factors including mismanagement of chronic pain, the availability of opioids, and economic distress.

“The current opioid crisis impacts all of us, not just people addicted to opioids. A concerted effort on the part of scientists and health care providers is needed to overcome this crisis.” — Tuan Trang, Researcher at the University of Calgary, Canada

NIH in collaboration with the U.S. Food and Drug Administration (FDA) and the private sector is working to accelerate biomedical research focused on stemming the opioid crisis by improving treatments for opioid misuse disorder and addiction, and by finding new treatments for chronic pain. In April 2018, it launched a program called the Helping to End Addiction Long-term (HEAL) Initiative.

Funding for this program will boost efforts to find new nonaddictive pain medications, such as those targeting voltage-gated sodium channels. Sodium channels provide the spark that helps neurons to “fire,” and blocking them would short-circuit pain signals from reaching the spinal cord.

“When you sit in the dentist’s chair, you don’t feel pain, because they have blocked your sodium channels with anesthetic,” Sulayman Dib-Hajj, STET of the Yale School of Medicine and the Veterans’ Affairs Medical Center, said. “The problem is the drugs are not selective.” Sodium channels are key to running the heart and brain as well as peripheral nerves, so blocking them all would be deadly.

Researchers are investigating ways to manage pain that do not lead to dependence on opioids, which can be deadly.
Image by Jinyue Liu. Courtesy, with permission: 2017, JNeurosci, 37(50).

One attractive drug target came from the realization in the 1990s that a particular channel called Nav1.7 is found only in peripheral nerves. Theoretically, a drug could block Nav1.7 and pain without stopping the heart and brain. The discovery that inherited pain syndromes result solely from genetic mutations in the gene for Nav1.7 solidified its potential as a target, and about a half dozen companies are currently developing drugs aimed at Nav1.7.

Another strategy employs the use of antibodies, tiny peptides aimed at proteins that contribute to pain sensations. Recently, the FDA approved an antibody aimed at the calcitonin gene-related peptide, a protein that causes migraine headaches. Nerve growth factor (NGF) is another pain-associated protein. It stimulates the growth and differentiation of neurons and also serves as a pro-inflammatory mediator at pain-sensing neurons. Antibodies blocking NGF should dull pain. Early clinical studies of anti-NGF ant ibodies caused joint damage in some osteoarthritis patients, but researchers improved the safety of the treatment and more trials are now underway.

A concerted effort on the part of scientists and health care providers is important to overcome this crisis because it “impacts all of us, not just [people addicted to opioids],” Trang said.