Communicating the Value of Scientific Research to the Public

Neuroscience arguably is unrivaled in its ability to fascinate and inspire, but too often, the importance of discoveries and their potential to relieve human suffering don’t reach the public. Communicating the promise of scientific inquiry to the public is particularly pressing in light of funding challenges and latent distrust of science. “If scientists don’t take hold of the conversation around science and public policy, then who [will]?” asked Siddhartha Mukherjee, oncologist and assistant professor of medicine at Columbia University Irving Medical Center, and Pulitzer Prize-winning author of The Emperor of All Maladies: A Biography of Cancer.

In the Neuroscience 2017 Dialogues Between Neuroscience and Society Lecture, a conversation with SfN Past President Eric Nestler, Mukherjee pointed to two public mandates — understanding nature and curing disease — as guidelines for communicating with patients, policymakers, and other lay audiences. Most labs run on public funding, and so it benefits scientists to ensure that the public understands how research works toward those mandates, Mukherjee said. Communication between scientists and the public is also necessary as researchers consider adapting technologies for revising the human genome to treat disease, a subject of Mukherjee’s latest book, The Gene: An Intimate History. The public must be involved so that decisions about how to implement these technologies are thoughtful and informed.

In describing their research to the public, scientists may encounter challenges including communicating the role of basic science as the foundation of discoveries that may lead to promising treatments, as well as anti-science sentiment and distrust of scientific findings. These barriers have intensified in recent years, with negative implications for public policy. 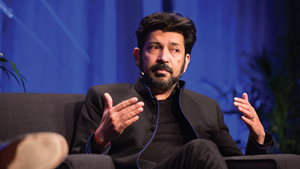 To communicate with policymakers, the general public, and other scientists, Mukherjee advised following two principles: first, avoiding jargon, and second, telling the truth. When communicating with lay audiences, scientists must tell the story of their research simply. “Distill it into what is still true but is simple enough for people to understand,” he said. Distillation of findings may not please every researcher looking for acknowledgement of his or her individual work, but it will help the audience — the public — to understand how science relates to their everyday lives.

Another communication challenge scientists face is qualifying the promise of research discoveries with the need for patience while awaiting new treatments. “It’s foolhardy to promise too much,” Mukherjee cautioned. Instead, he said, scientists can remind people of the history of the field so they can better understand its current state. Scientists can also describe what they are finding now and where the field is going. “And don’t forget to talk about failure,” he said, advising researchers to acknowledge that some experiments will fail and not everything is understood — but therein lies the value of discovery.

Within the current regulatory environment, and especially in light of recent changes to NIH clinical trials guidelines intended to increase the transparency and accountability of biomedical research, some scientists may struggle to implement creativity in clinical trials. “It is not unusual to go into the clinic and find clinicians and patients frustrated because they feel as if they can’t push the boundaries,” Mukherjee said. As a historian of science, however, Mukherjee stressed that medical history is rife with failed experiments and unexpected results, and that in neuroscience as in clinical oncology, creativity must be balanced with patient safety.

“If scientists don’t take hold of the conversation around science and public policy, then who [will]?” — Siddhartha Mukherjee, Oncologist and Pulitzer Prize-winning author

“Finding the balance between allowing creative impulses to flourish is extraordinarily tough, and I think it would be fair to say that in clinical oncology, particularly people who are leading investigative trials are feeling a kind of frustration in being able to deliver the most creative kinds of trials,” he said. “Finding that balance is going to be crucial, and it’s a moving line.”

This balance is currently being weighed in the emerging conversation around gene therapy. While gene-editing technologies are powerful tools that may one day offer cures for genetic diseases, their safety for patients — and more broadly, their effect on humanity as a whole — is not fully understood.

Mukherjee presented a threesided framework, or “triangle,” for considering whether genetic research should be undertaken, in which each side represents a different consideration. One consideration is extraordinary suffering: Does the genetic change proposed address a condition of utmost severity? Another is penetrance, or the strength of the relationship between the gene and the disorder: How strong is the evidence that altering the genetic code will ameliorate the disease? The last is justifiable choice: Is gene editing justified or can the condition be treated without altering the human genome?