From the molecular biology of a single neuron to the breathtakingly complex circuitry of the entire human nervous system, our understanding of the brain and how it works has undergone radical changes over the past century. These advances have brought us tantalizingly closer to genuinely mechanistic and scientifically rigorous explanations of how the brain’s roughly 100 billion neurons, interacting through trillions of synaptic connections, function both as single units and as larger ensembles. The professional field of neuroscience, in keeping pace with these important scientific developments, has dramatically reshaped the organization of biological sciences across the globe over the last 50 years. Much like physics during its dominant era in the 1950s and 1960s, neuroscience in the 2010s has become the leading scientific discipline with regard to funding, numbers of scientists, and numbers of trainees. Furthermore, neuroscience as fact, explanation, and myth has just as dramatically redrawn our cultural landscape and redefined how Western popular culture understands who we are as individuals. In the 1950s, especially in the United States, Freud and his successors stood at the center of all cultural explanations for psychological suffering.

In the new millennium, we perceive such suffering as erupting no longer from a repressed unconscious but, instead, from a pathophysiology rooted in and caused by brain abnormalities and dysfunctions. Indeed, the normal as well as the pathological have become thoroughly neurobiological in the last several decades. In the process, entirely new vistas have opened up in fields ranging from neuroeconomics and neurophilosophy to consumer products, as exemplified by an entire line of soft drinks advertised as offering “neuro” benefits.

It is easy to forget how much the neuroscience world changed during the first 50 years of the Society for Neuroscience (SfN), from 1969 to 2019, and to lose sight of the role that SfN played in helping to forge this new world. Even the fact that we now speak of “neuroscience” as a unified field having a history owes much to the efforts of the Society, its leadership, and its rapidly expanding membership during these formative years. By any measure, these 50 years witnessed a major epochal shift in the nature of brain science. The radical changes included an unprecedented growth in the science itself, coupled with the meteoric growth of a new scientific discipline with newly created neuroscience institutes, graduate programs, and departments, and, arguably most important, with the creation of a new cultural sensibility of what it means to be human, one that dissolved the Freudian-hued understanding of the mind and replaced it with a sharper neurobiological lens. These changes came about through the work of a community of brain scientists in the late 1960s and early 1970s who were committed to understanding how the mind emerges from the brain and convinced that such an effort required a fundamental reordering of scientific practices, institutions, and affiliations.

Of course, scientists have observed, dissected, and performed innumerable experiments on various parts of the nervous system for centuries. However, the idea that the study of the nervous system constituted a discipline separate from traditional fields of study such as anatomy, pathology, and physiology did not emerge until the 1960s and 1970s. Francis O. Schmitt coined the word “neuroscience” when he established the Neurosciences Research Program at MIT in 1962. His vision of this neologism was a discipline that could answer the fundamental question of how the brain gave rise to the mind.

Some 19th-century German psychiatrists had argued for the unity of mind and brain in the understanding of psychiatric disease. In his 1847 psychiatric textbook, Principles of Medical Psychology, Ernst von Feuchtersleben wrote: “Mental disease must therefore be deduced, neither from the mind nor the body, but from the relation of the each to the other.”1 Wilhelm Griesinger, the most famous of the 19th-century German materialist psychiatrists, wrote in 1868: “It is only from a neuropathological standpoint that one can try again to make sense of the symptomatology of the insane.”2 From the 1840s through the 1940s, researchers made repeated efforts to understand the biological basis of insanity and normal mental states though with little or no success.

That said, prior to the 1950s scientists lacked the intellectual and material tools to link the brain and mind compellingly and rigorously. During the early post-WWII era, major scientific breakthroughs dramatically altered what was possible. James Watson and Francis Crick’s 1953 discovery of the double helical structure of DNA, combined with an unprecedented number of major neurobiological discoveries (ranging from Hodgkin and Huxley’s discovery of the action potential to enhanced understanding of the chemical nature of synaptic transmission) and new technologies (e.g., the electron microscope), transformed questions about the ways in which mind and brain interconnect into scientifically tractable problems. In 1963, Schmitt wrote: “It now seems possible to achieve…revolutionary advances in understanding the human mind…By making full use of [the approaches of physiology and behavioral sciences] and by coupling them with the conceptual and technical strengths of physics, chemistry, and molecular biology, great advances are foreseeable.”3 Presciently, Schmitt and the founders of the Society for Neuroscience realized the critical importance of creating fundamentally new infrastructures for training, professionalization, and funding if this new interdisciplinary effort were to succeed on a grand scale.

These early pioneers succeeded beyond their wildest expectations in fashioning a new discipline, held together not by a set of common methods or theories, but by the common drive toward understanding how the brain and nervous system worked. SfN founders and early leaders made this possible by emphasizing a kind of intellectual democracy and egalitarianism that selfconsciously enforced inclusiveness regardless of a researcher’s disciplinary background, favored organism, or methodological approach. All were welcome in the melting pot of neuroscience, a metaphor that aptly underscores the particularly postwar American stamp that shaped the Society for Neuroscience.

Indisputably, the conditions for such a perfect storm were already swirling about the biological sciences at the end of the 1960s. But, as we will outline in this essay, it took the active energy and foresight of brain scientists such as Schmitt, Ralph Gerard, and Vernon Mountcastle to shape these forces into what would become the single largest biomedical research discipline on the globe.

From its founding in 1969 to the present, the Society for Neuroscience has played a critical role in creating this brave new neuroscientific world. In this essay, we will explore the Society’s work and influence through its 50th anniversary in 2019. In contrast to most modern professional societies, SfN played a unique role not only in the actual creation of the field, but also in developing the science and scientific community represented by that field by bringing together scientists trained in a variety of other disciplines and methodologies under the common banner of neuroscience. SfN founders and early leaders consciously sought to make a new community of scientists that eschewed traditional parochialism and disciplinary isolation and instead embraced the idea of an intellectually and methodologically open field in which no one approach was privileged over the other. The founding ideals of SfN bear the stamp of the time and place of its birth, of confidence in egalitarian and democratic institutions.

First and foremost, this is a story of how SfN created unity out of an enormous diversity of approaches and disciplinary traditions and then expanded its organizational mission to provide a home community for scientists at every career stage, in every nation, and in multiple career paths. This story is a complicated narrative that involves many individuals, institutions, new technologies, new biological discoveries, and changing social, economic, and political contexts. While we do not try to tell the full history of the Society in this essay, we have tried to relate the stories and events of SfN’s first 50 years that we think have the most relevance for the present. Neuroscience in its short life has become one of the largest and most exciting fields within biomedicine. While this is an achievement worth celebrating, there are also major challenges ahead. We hope this history can help provide some context and even some guidance for those challenges. 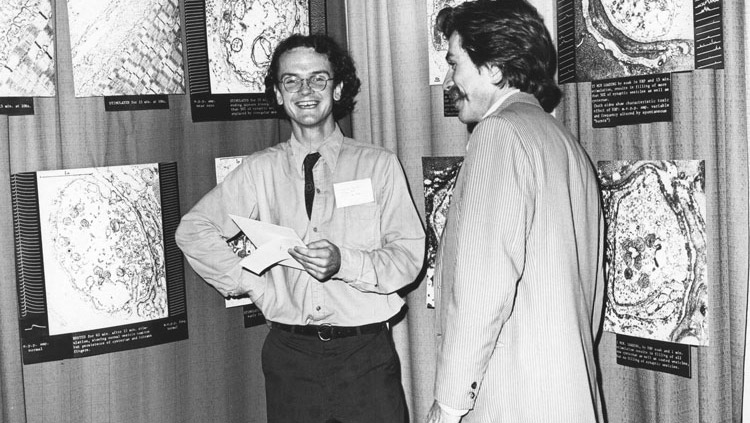