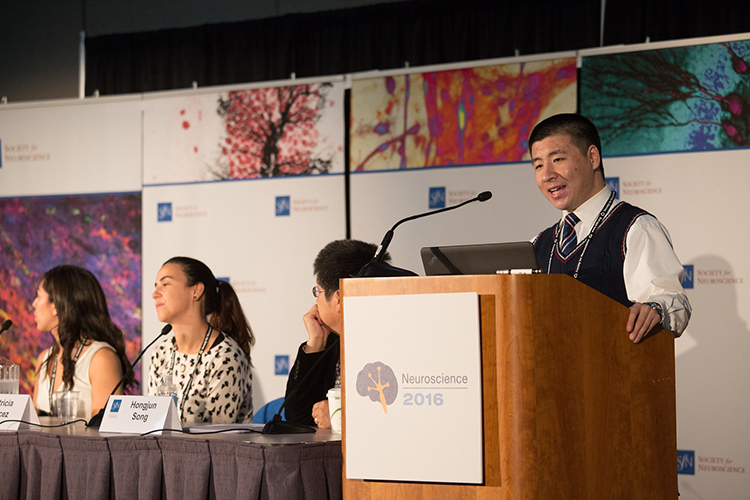 Researchers discuss their work studying the Zika virus and its effects on the developing brain during a press conference at Neuroscience 2016.

Zika virus dominated headlines in 2016 after it was linked to a spike in the number of Brazilian babies born with abnormally small heads, a condition called microcephaly. When a pregnant woman becomes infected with the mosquito-borne virus, it can pass through the placenta and disrupt fetal brain development, leading to a smaller cerebral cortex and smaller head. Early in the year, the World Health Organization declared Zika virus a global health emergency. But as the threat grew, little else was understood about the basic biology of the disease, its implications in the developing brain, or how to prevent or treat its devastating effects.

“Because of the association with neurological disorders, many neuroscientists rose to the challenge and actually made tremendous progress during the last 10 months or so,” said Hongjung Song, a stem cell expert at Johns Hopkins School of Medicine and moderator of a press conference on Zika virus at Neuroscience 2016.

Researchers shared some of that progress during the session, identifying how Zika virus influences gene and protein expression, how it stunts the birth of new neurons, and how some individuals are more vulnerable than others.

In order to understand how Zika virus causes brain defects, Patricia Garcez of the Federal University of Rio de Janeiro studied how the virus affects gene expression in embryonic cells. She exposed human stem cells to a Brazilian strain of the virus and then manipulated the stem cells to form neurospheres — three-dimensional clusters of neurons similar to fetal brain tissue. Three days later, she compared the activated genes in the infected cells to genes active in uninfected cells and found the virus disrupted more than 500 genes and related proteins. Zika infection curbed activity of genes involved in cell division, and as a result, the infected neurospheres were smaller than the uninfected neurospheres. Infected cells also had reduced expression of genes governing differentiation into specific cell types.

“At the same time these cells are supposed to be proliferating, [the virus] shuts down cell cycle progression and also decreases neurogenesis, so it decreases the generation of neurons,” leading to the reduced size of the neurospheres, Garcez said. By determining the genes the virus affects, “we’ve identified novel targets that could be used to mitigate the viral infection,” she added.

As Zika takes over and begins shutting down expression of certain genes, cells might try to defend themselves against the viral attack. Olivia Lossia, a graduate student in the laboratory of Julien Rossignol at Central Michigan University, wondered whether and how the cells might fight back.

Lossia infected mouse stem cells with Zika virus and analyzed gene and protein expression seven days later. Like Garcez, Lossia found that infection dampened the expression of genes and proteins involved in building and maintaining new neurons and that infected cells secreted fewer proteins in general. However, infection increased expression of genes for creating astrocytes — a type of glial cell that can help support and regenerate neurons — and boosted secretion of glia maturation factor — a protein that helps repair the nervous system after injury — suggesting the fetal brain fights the infection by turning up production of non-neuronal support systems.

As researchers reveal cells’ complex reactions to Zika virus, it’s important to account for the fetal brain’s architecture and organization, as well as how different types of cells interact. Xuyu Qian, a graduate student in Song’s lab at Johns Hopkins, examined how Zika affects organoids, three-dimensional “mini-brains” grown in culture.

“These organoids are capable of recapitulating the many key features of the human developing brain, in terms of cell type diversity, organization of different layers, and also gene expression,” Qian said.

Qian grew human induced pluripotent stem cells in a mixture of chemicals that coaxed the floating cells to self-assemble, resulting in organoids that were organized in roughly the same way as a fetal brain. He then exposed the organoids to Zika virus at different stages of development and let them grow for two weeks.

Zika virus predominantly infected neural precursor cells, causing them to manufacture more of the virus and infect neighboring cells. Zika virus also killed cells and reduced proliferation, resulting in smaller layers of neurons and smaller organoids over all, compared with uninfected organoids. Qian and his colleagues also used the setup to screen possible treatments and have already identified one drug — emricasan, an inhibitor of apoptosis already in clinical trials for liver diseases — that protected infected neurons from dying.


Some Fetal Brains Are More Susceptible to Zika Virus Than Others

Zika virus does not cause birth defects in everyone; only a subset of infected infants are born with microcephaly. Erica McGrath, a graduate assistant in Ping Wu’s laboratory at the University of Texas Medical Branch, wondered what makes some individuals more susceptible than others.

McGrath infected neural stem cells derived from three fetal brains and found that while all three cell lines had similar rates of Zika infection, only two of the lines had fewer cells that differentiated into neurons. The susceptible lines showed increased expression of genes related to cell death and the immune response, and decreased expression of genes for cell survival.

“We are hoping our findings will pave the way to identifying high-risk individuals that might be at a greater risk than the rest of the population for developing neurological deficits,” McGrath said. Knowing what is unique about those individuals may also help identify where to focus treatment.

As Zika virus continues to spread around the globe, neuroscientists are making progress in understanding the disease. By determining the genes, proteins, and cell types affected and identifying people at greater risk, researchers now have clearer targets to direct their treatment efforts and prevent the virus’ devastating effects.