Society for Neuroscience - Q&A: Karoly Nikolich and the Seeburg Prize 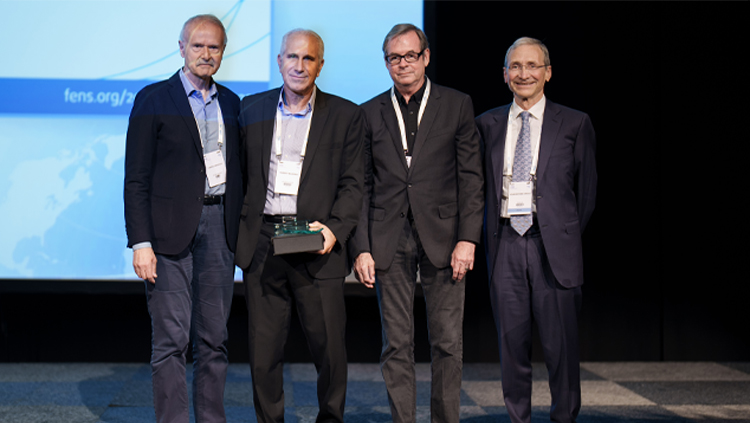 Karoly Nikolich is chairman of the board of directors of Alkahest. Nikolich has been a serial entrepreneur after working as a neuroscientist at Genentech during the 1980s and 90s. He was vice president of research at Lynx Therapeutics, co-founder of neurotherapeutics companies as AGY Therapeutics, Amnestix, Neurofluidics, Chase Pharmaceuticals, Circuit Therapeutics, and Alkahest. He has been venture partner with Pivotal BioVentures, and has also served on the boards and scientific advisory boards at a number of neurotherapeutics and biotech companies. Nikolich is a graduate of Eotvos University in Budapest and worked as postdoctoral fellow at Tulane University and UCSF before joining Genentech. He has been adjunct professor in the Department of Psychiatry at Stanford University Medical School.

Neuroscience Quarterly (NQ): Can you describe your relationship with Peter Seeburg, the namesake of the Peter Seeburg Integrative Neuroscience Prize? What was it about him that motivated you and the Schaller-Nikolich Foundation to create the prize?

Karoly Nikolich (KN): At Genentech, I worked in the laboratory of Peter Seeburg who, at the time, was a prominent molecular biologist. We started to identify molecules of neuronal and endocrine significance during the four years I worked in Peter’s lab. He then moved to Heidelberg in Germany where he expanded this research. We continued to collaborate on projects and remained close friends.

Peter was an exceptional, driven scientist, one of the founders of molecular neuroscience. He was the most-cited author in the neurosciences in the 1980s and 90s, and remained a prolific, high-impact author until his death in 2017. He was a student of Heinz Schaller, a prominent geneticist in Heidelberg, and a friend of Chica Schaller, a neuroscientist in Heidelberg and Hamburg. Their foundations have provided generous funding for a next generation of young scientists. Together with the Schallers, as well as Peter’s students, postdoctoral fellows, and collaborators, we felt that a prominent prize recognizing his pivotal contributions to neuroscience was an appropriate way to honor his legacy and genius.

NQ: What goals were the Foundation hoping to achieve by endowing an award aimed at recognizing “outstanding advances in the understanding of executive brain functions and cognitive processes” and supported with an annual $100,000 prize? How does it align with the Foundation’s purposes?

"Today, we are able to study the nervous system at an unprecedented level of detail, a beauty that Peter’s work has significantly contributed to."

KN: The Schaller-Nikolich Foundation is dedicated to supporting exceptional individuals, projects, and young people predominantly in neurosciences and the arts. Chica Schaller and I originally envisioned creating this prize, however, she passed away in 2019, and I continued to realize our intent. This prize is meant to recognize prominent individuals who have made original, pioneering contributions in neurobiology and in the molecular understanding of the higher functions of the brain and nervous system. Today, we are able to study the nervous system at an unprecedented level of detail, a beauty that Peter’s work has significantly contributed to. We wish to perpetuate this through the prize. Importantly, the award is made by an independent committee of experts and I do not have any involvement or influence on the selection and award.

NQ: The first two Seeburg Prize awardees are Peter Jonas (2021) and Rob Malenka (2022). How does their work exemplify the purpose of the award and Dr. Seeburg’s legacy?

KN: As I was not involved in the selection process, I’ve asked the award selection committee chair for both awards, Rick Huganir, to speak to this question.

Rick Huganir, Bloomberg Distinguished Professor of Neuroscience and Psychological and Brain Sciences, Johns Hopkins School of Medicine: The first recipient of the Seeburg Prize in 2021 was Peter Jonas. His rigorous study of excitatory and inhibitory synapses in the brain using electrophysiological and computational methods have made seminal findings in the field. His early work, in collaboration with Peter Seeburg and Hannah Monyer, demonstrated that AMPA receptors in interneurons, unlike the majority of AMPA receptors in the brain, were calcium permeable and also defined the molecular mechanisms underlying this calcium permeability. His interdisciplinary research ranged from studying ion channels and circuits and led to our better understanding of what determines gamma oscillations in the brain as well as to the processes in the dentate gyrus and the CA3 network that led to pattern separation and pattern completion. His research from receptors and ion channels to synapses and networks exemplifies the integrative approach neuroscience that the Seeburg Prize honors.

The second recipient of the Seeburg Prize in 2022 is Rob Malenka for his ground-breaking work to understand the mechanisms that underlie synaptic plasticity. Initially trained as an electrophysiologist he realized that to understand mechanisms of synaptic plasticity he would need to investigate it at a molecular and cell biological level. Using these techniques, and many of the tools and reagents that Peter Seeburg developed, he was a leader in deciphering the role of AMPA receptor trafficking in the expression of both long-term potentiation and long-term depression. He then went on to show that these plasticity mechanisms play important roles in drug addiction. Later in his career he expanded his studies from the hippocampus to the VTA and nucleus accumbens to define circuits involved in adaptive, pathological and motivational behaviors including anhedonia, pain and social behaviors. His research has exemplified the interdisciplinary neuroscience approach that the Seeburg Prize honors.

NQ: The Seeburg Prize is unique in that it is selected by a joint SfN-FENS selection committee, and it is presented at the SfN annual meeting in odd years and at the FENS Forum in even years. Why was such a partnership between SfN and FENS appealing to you and the Foundation?

"Peter Seeburg worked in the U.S. and in Germany as a student, postdoctoral fellow, then independent scientist and ultimately professor. His career was truly international."

KN: Peter Seeburg worked in the U.S. and in Germany as a student, postdoctoral fellow, then independent scientist and ultimately professor. His career was truly international. He had a truly international laboratory with young scientists from around the world. As I pursued the creation of the prize and discussed it with the leadership of SfN and FENS, it became a natural opportunity to present the prize in an alternating manner. FENS is held every other year and SfN suggested to solve the intent through the alternating award. I am personally very pleased with this solution that honors Peter’s work on the two continents.