Inside Neuroscience: Tapping Into the Cannabinoid System 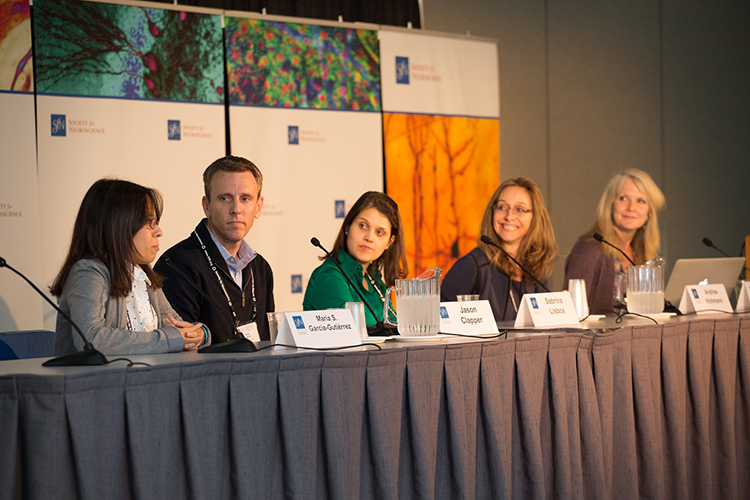 Despite the growing popularity of medical marijuana and its legalization in many states, the marijuana plant is not an FDA-approved treatment for any condition. The pain-relieving and anxiety-reducing properties of marijuana suggest its potential in treating conditions such as chronic pain and post-traumatic stress disorder. However, the side effects, like motor impairment, memory problems, psychosis, and potential for abuse, hamper its therapeutic potential.

Seeking alternative therapies, neuroscientists are beginning to tap into the brain’s cannabinoid system. Endocannabinoids are compounds produced naturally in the brain that bind to the same receptor as tetrahydrocannabinol (THC), the main psychoactive ingredient in marijuana. Scientists hypothesize that targeting the shared receptor might provide some of marijuana’s benefits without the negative outcomes. (The FDA has already approved cannabinoids for the treatment of two conditions: chemotherapy-induced nausea and extreme weight loss caused by AIDS.)

“This is really a very exciting time to be a neuroscience researcher in the cannabinoid field,” said Margaret Haney, a drug abuse expert at Columbia University in New York and moderator of a press conference on cannabinoids at Neuroscience 2016. “Our scientific understanding of the therapeutic potential of the marijuana plant is really in its infancy, as is our understanding of the THC-like chemicals in our brain and their potential therapeutic use.”

Post-traumatic stress disorder (PTSD) is thought to be due in part to a dysregulation of the endocannabinoid system; endocannabinoids help regulate stress, anxiety, pain, and inflammation, all of which are elevated in PTSD. Many PTSD sufferers turn to marijuana for help, but, to avoid its negative side effects, Sabrina Lisboa, of the University of São Paulo in Brazil, hoped a synthetic cannabinoid could provide similar benefits by reducing both inflammation and anxiety.

“This research provides a better understanding of PTSD neurobiology — implicating neuroinflammation and also dysregulation of the endocannabinoid system in these PTSD-like symptoms — and also can provide alternative pharmacological treatments,” Lisboa said.

Nearly 50 million Americans suffer from chronic pain, a condition that has spurred a growing opioid epidemic. Often prescribed in attempt to treat chronic pain, opioids can become addictive and lead to overdose and death. Endocannabinoids could provide an alternative as they naturally alleviate pain by binding the CB1 cannabinoid receptor, the same receptor as THC. But drugs that increase endocannabinoids or block their breakdown interact with many systems and can cause unwanted side effects throughout the body.

Rather than flooding the system with endocannabinoids, Andrea Hohmann at Indiana University tested the potential of indirectly enhancing the binding of natural endocannabinoids to the CB1 receptor using a substance called a positive allosteric modulator (PAM). “An advantage of the positive allosteric modulator would be that we would only be boosting endocannabinoid signaling under conditions in which it’s already being released,” Hohmann said. This would prevent off-target effects elsewhere in the body.

To test the effects of the PAM on chronic pain, Hohmann injected mice with a chemotherapy agent that damages nerves and causes neuropathic pain; following the injection, mice displayed increased sensitivity to pressure and cold stimuli. Mice that were then treated with the PAM to enhance endocannabinoid binding, however, exhibited normal pain thresholds. And unlike endocannabinoid or THC treatment, the treatment did not cause motor symptoms or show potential for abuse as it lacked reward properties and did not produce dependence or tolerance.

“The [treatment] showed sustained therapeutic efficacy, meaning it remained effective in suppressing the neuropathic pain, and basically was able to reverse the pain hypersensitivity to pre-injury levels,” Hohmann said.

Jason Clapper of Abide Therapeutics is using a similar strategy to target chronic pain. He and his colleagues at Abide created a compound that inhibits the protein monoacylglycerol lipase (MGLL), leading to an increase in the endocannabinoid 2-AG.

Using rat models of acute, chronic, and inflammatory pain, Clapper demonstrated that the MGLL inhibitor reduced pain-related behaviors, such as attending to the site of a painful stimulus, and did not cause side effects that are commonly observed with marijuana or other cannabinoids, like catalepsy (complete rigidity and lack of movement). The inhibitor could also be combined with a low dose of morphine to provide pain relief equivalent to a high dose of morphine in rats.

“We’ve demonstrated that our selective MGLL inhibitors can reduce pain-related behaviors in a diverse set of preclinical models, suggesting that there is a potential to achieve opioid-free pain relief,” Clapper said. Abide Therapeutics is now investigating a selective MGLL inhibitor in humans and testing how it alters the brain’s response to pain observed by fMRI.

In addition to THC, another cannabinoid found in marijuana is cannabidiol (CBD). CBD has been shown to have anxiolytic, antidepressant, and antipsychotic properties, prompting Maria García-Gutiérrez of Miguel Hernández University in Spain to suspect it may have potential for helping treat alcohol-use disorders. Alcohol causes approximately 2.5 million deaths worldwide each year, but therapies for alcohol-use disorders are ineffective; 70 percent of patients relapse within a year.

García-Gutiérrez selected mice with a high preference for ethanol and treated them with either CBD or a control. Preference for ethanol over water dropped in the CBD-treated mice, but not in the controls. García-Gutiérrez also tested CBD in a new formulation that provides continuous controlled release for two weeks. In this part of the study, mice had to press a lever to receive ethanol; after seven days, mice given CBD pressed the lever less than control-treated mice, suggesting they were less motivated to drink. Another set of mice were exposed to ethanol and then given five days without ethanol. After the break from ethanol, mice treated with CBD consumed less ethanol than control mice, indicating CBD reduced relapse behaviors.

The cannabinoid system may hold the potential to treat a number of disorders, and neuroscientists are just scratching the surface.

“People are looking at the ways to raise the body’s own THC-like chemical, which doesn’t have the same abuse-related consequences that THC administration does,” Haney said. “We’re very familiar with the effects of THC, but what’s exciting is all these other compounds, and we’re just starting to really learn about them.”