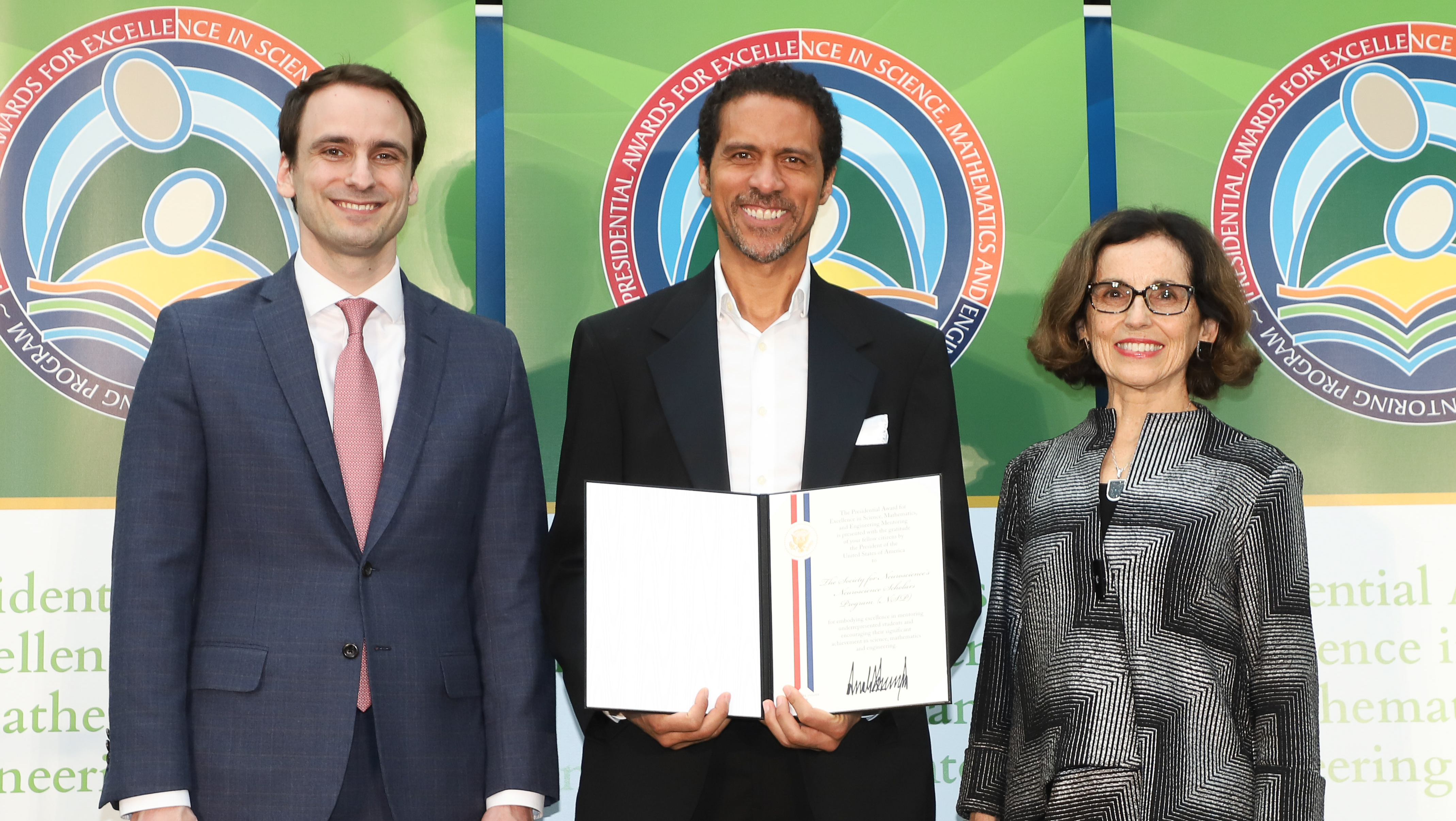 Acknowledging SfN’s longstanding commitment to mentoring and the successful outcomes of its Neuroscience Scholars Program (NSP), NSF, on behalf of the White House Office of Science and Technology Policy, honored the program in June with the Presidential Award for Excellence in Science, Mathematics and Engineering Mentoring (PAESMEM).

The award recognizes outstanding efforts of mentors in encouraging the next generation of innovators and developing a science and engineering workforce that reflects the diverse talent of America. It was presented by Director of NSF France Córdova at a ceremony held at the National Portrait Gallery, where former NSP Principal Investigator Erich Jarvis, of The Rockefeller University, accepted the award on behalf of SfN. Jarvis was a fellow who participated in the program in 1995 and has mentored hundreds of early career neuroscientists.

Founded in 1982, the Neuroscience Scholars Program, funded by the National Institute of Neurological Disorders and Stroke (NINDS), has a long history of providing unparalleled career opportunities for underrepresented groups in neuroscience. The two-year training program supports neuroscience trainees’ scientific and professional growth through mentoring, networking, and professional skills development and works toward the Society’s objectives of supporting the professional development of scientists from all backgrounds and increasing diversity in the field to promote discovery.

Since 2012, the NSP has been codirected by principal investigators Gina Poe, professor at the University of California, Los Angeles, and Julio Ramirez, professor at Davidson College, with the support of an advisory board composed of leading neuroscientists who share a commitment to advancing the careers of underrepresented scientists.

NSP Fellows and Associates have access to live and on-demand webinars and other events as well as educational resources. They are invited to present an abstract in the Diversity Poster Session and attend other special events at SfN’s annual meeting, and to join an online affinity group for seeking career connections and guidance from mentors and Neuroscience Scholars Program Alumni. Fellows additionally receive two years of complimentary SfN membership, full support to attend the annual meeting, and $1,500 each year to support additional professional development activities.

NSP Fellows and Associates have access to live and on-demand webinars and other events as well as educational resources. They are invited to present an abstract in the Diversity Poster Session and attend other special events at SfN’s annual meeting, and to join an online affinity group for seeking career connections and guidance from mentors and Neuroscience Scholars Program Alumni. Fellows additionally receive two years of complimentary SfN membership, full support to attend the annual meeting, and $1,500 each year to support additional professional development activities.

For Cindy Leiton, the opportunities the Neuroscience Scholars Program offers to connect with an unequivocally supportive community of scholars proved pivotal for her career.

“I felt I could attend the [annual] meeting and feel a part of a community — I felt like I was part of something larger,” said Leiton, a current Class Advisor for SfN’s Neuroscience Scholars Program who was selected as a Fellow in 2011 as a graduate student.

Leiton’s experiences in the program led her to “ask the big questions, such as, ‘What are we doing in neuroscience to develop new therapies?’” Now a postdoctoral fellow at Stony Brook University, she studies the role of matrix metalloproteinases in oligodendrocyte development and myelination and is one of more than 800 graduates of the program who have gone on to become researchers respected throughout the field.

Eduardo Rosa-Molinar, now director of the Microscopy and Analytical Imaging Resource Core Laboratory and professor of pharmacology and toxicology as well as of anatomy and cell biology at the University of Kansas, completed the program in 1995, when it was called the Minority Traveling Fellowship — the program was also known as the Conference Program for Young Minority Scientists in an earlier incarnation.

Rosa-Molinar said that in the 20 years since, he has benefited from the mentors he found through the program tremendously. “They took their mission very seriously, and they imparted a lot of expertise to me,” he said.

In addition to mentoring and networking opportunities, NSP Fellows have noted SfN membership and attendance at the annual meeting, as well as invitations to special networking events at the meeting, as some of the most valuable components of the program. They also have expressed that the program supported their professional and career development goals and facilitated increased confidence in their abilities both as researchers and to achieve short- and long-term goals.

“Every SfN meeting I went to, I was encouraged to grow, especially being partnered with my mentors,” said Farah Lubin, an associate professor at the University of Alabama at Birmingham (UAB) who studies the molecular underpinnings of memory. Lubin, who graduated from the program in 2002, said that her time as an NSP Scholar provided a foundation for her career by creating “a network and a sense of belonging.”

Lubin said she appreciates the opportunities that the Neuroscience Scholars Program gave her early in her career, as well as the career skills it taught her for recognizing and making the most of them. “That’s all I ever asked for, and my students, that’s all they’re asking for. If someone gives me an opportunity, then I can run with it.”

To share similar opportunities with the next generation of scientists, she started the Neuroscience Roadmap Scholars Program at UAB. “I felt I was basically a product of this type of program, and I felt it was an opportunity to give back and to increase diversity right where I was,” she said.

The Neuroscience Scholars Program is open to all citizens or permanent residents of the U.S. enrolled in a graduate degree-granting program or postdoctoral fellowship, from a group recognized by NIH as underrepresented in the biomedical, behavioral, clinical, and social sciences. Up to 18 applicants will be selected to become Fellows and will receive full travel support to the annual meeting, in addition to matching with a senior mentor to support them throughout the two-year program, and access to enrichment funds to support their professional development interests. All other eligible applicants are invited to become NSP Associates and participate in programming focused on career advancement issues, topics related to the research process, and cutting-edge scientific content, alongside the Fellows. Up to 30 Associates will also receive an NSP Professional Development Award based on the merit of their application, which provides financial support to attend SfN’s annual meeting.

Learn more about the program and how to apply to be a part of the 2019–21 class of Scholars.