Inside Neuroscience: Wiring the Brain in Early Life 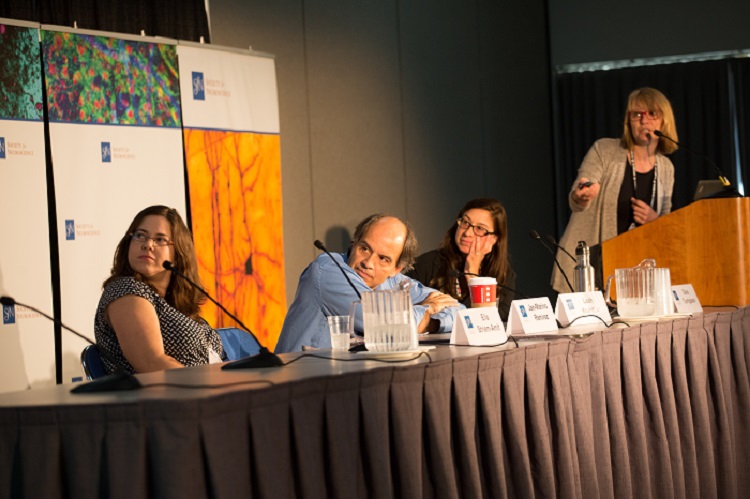 As the brain develops throughout childhood and adolescence, experiences shape its connections and organization. “One of the really remarkable features of the mammalian, including the human, brain is its incredible plasticity, the ability of circuits in the brain to undergo rewiring in response to changes in the environment,” said Gina Turrigiano, who studies experience-driven brain development at Brandeis University and moderated a press conference on sensory development at Neuroscience 2016. “Most mammals actually need to interact with the world and experience the world in order for the circuits in their brains to get wired properly.”

Experience in early life is crucial because after the critical period — a developmental window when the brain is particularly sensitive to sensory stimuli —the brain is less plastic. The quality and quantity of early experience matter, too: As the panel discussed during the press conference, too much, too little, or the wrong kind of stimulation can negatively affect the brain’s development.

To determine the role of the early environment on the brain’s structure and formation of connections in early life, Leah Krubitzer and her team at the University of California, Davis, compared rats reared in typical laboratory cages to rats reared in large, outdoor pens. The outdoor pens were three thousand times larger than the laboratory cages and exposed the rats to different weather conditions; sights, smells, and sounds of other animals; and opportunities to dig in the dirt and climb branches. When the rats were adults, Krubitzer used electrodes to stimulate their motor cortices and map the areas dedicated to different regions of their bodies. The motor cortices of rats reared outdoors had larger representations of the hindlimbs and tail (both used for climbing), while the cage-reared rats’ brains showed that more volume was devoted to the whiskers and face.

“We’re seeing a very, very different motor map in these field pen animals than in their laboratory counterparts,” Krubitzer said. “What’s really cool is that there are also differences in basic developmental trajectories.” As young pups, the field-reared rats opened their eyes and rolled over later but learned to walk sooner than the caged rats, suggesting that the larger, more stimulating environment affected not only the organization of the brain but also when behaviors developed.

It’s also possible to be overstimulated by too much input though. Some research has linked excessive use of fast-paced media during childhood to problems paying attention and conditions such as attention deficit hyperactivity disorder (ADHD). To test the effects of excessive sensory stimulation on attention, Jan-Marino Ramirez and his team at Seattle Children’s Research Institute exposed 10-day-old mice to six hours of television per day for six weeks.

Compared to control mice, the excessively stimulated mice were more hyperactive and less risk-averse, running around an open field and venturing into its center more often, and their brains displayed increased excitation in the nucleus accumbens, amygdala, and medial prefrontal cortex. They also had worse short-term memories — they were unable to discriminate between objects they had previously encountered and new ones — and showed decreased neurogenesis in the hippocampus. Finally, the excessively stimulated mice were more prone to cocaine addiction, preferring to spend more time in a chamber where cocaine was administered. These results are consistent with the hyperactivity, short-term memory changes, and cocaine addiction that have been observed in ADHD cases.

Researchers are also finding that having little to no stimulation in some domains may not cause as large an overhaul of the brain’s organization as previously thought. In order to encode sounds, the brain requires auditory input; children who are born deaf need cochlear implants in their first few years of life or hearing will not develop properly. However, a team of researchers from Harvard University, the University of Coimbra, and Beijing Normal University found that the architecture of the auditory cortex is largely the same in hearing and deaf people, indicating that the overall structure of and connections in the brain remain the same despite differences in sensory input.

The team scanned the brains of hearing volunteers and mapped which areas of the auditory cortex responded to different tones using magnetic resonance imaging (MRI), creating a tonotopic map that showed where sounds of different frequency were processed in the volunteers’ brains. Next, researchers scanned the brains of both hearing and deaf volunteers while they laid quietly in the scanner and then determined which areas of the auditory cortex were activated concurrently with core tone-selective areas in each subject at rest and compared these functional connections to the tonotopic map.

In hearing subjects, the resulting map showed which regions were interconnected, working together to decipher high-pitched sounds separately from low-pitched sounds. “But we also find the exact same organization in adults born profoundly deaf,” said Ella Striem-Amit, the lead author of the study, even though cortical regions devoted to auditory input in hearing people may be used in deaf people to process visual input, as in sign language.

“This basically shows that at least the large-scale organization of the auditory cortex doesn’t critically depend on auditory experience in order to develop,” senior researcher Yanchao Bi said. While they stressed that fine-tuning the networks does require sensory input and may be aided by cochlear implants inserted during infancy, having the large-scale organization intact reveals the possibility of additional treatments later in life.

In order to develop properly, the brain must receive a finely tuned level of stimulation beginning early in life, and neuroscientists are eagerly working to discover what that level of stimulation is. “A really critical goal in the field is to understand exactly … what aspects of experience are really important for giving us properly wired circuits, or maybe in some cases, abnormally wired circuits,” Turrigiano said, adding that “it might even allow us to really enhance functionality” in sensory-impaired people, those with ADHD or other developmental disorders, or even in normal development.