Enriched environments can also influence the behavior and brains of offspring that never experienced them.

For experimental rodents, an enriched environment offers more space, more exercise equipment like running wheels and ladders, and more companions. To explore the transgenerational effects of enriched environments on a sensory cortex, Kalogeraki et al. looked to ocular dominance plasticity, an established model for studying brain plasticity (Wiesel and Hubel, 1963; Espinosa and Stryker, 2012). In younger animals, blocking visual input to one eye will lead to a shift in the balance of input from each eye into the cortex. This plasticity is typically lost in adulthood (Lehmann and Löwel, 2008). An enriched environment, however, can change this. Kalogeraki et al. confirmed earlier work showing that mice raised in enriched cages maintain ocular dominance plasticity even as adults (Greifzu et al., 2014). To show this, the researchers used a technique called intrinsic signal optical imaging, in which increased blood flow in the brain is captured on camera and serves as a proxy for neuronal activity. After having one eye closed for seven days and reopened, the visual cortex of adult enriched mice showed an altered balance of activity compared to mice without visual perturbance, indicative of an ocular dominance shift and maintenance of brain plasticity in adulthood. Adult mice raised in standard cages displayed no alteration of cortex activity. 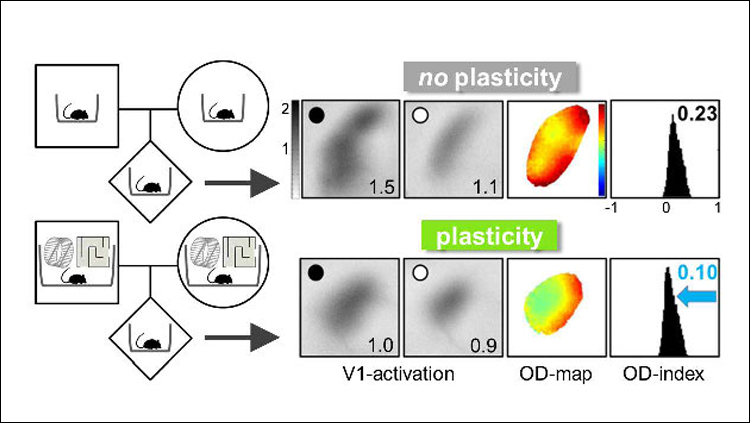 Next, the researchers tested whether the offspring of enriched mice could maintain visual cortex plasticity in adulthood, even if they were raised in standard cages. Offspring of the enriched parents were born and raised in standard cages until adulthood, when they had one eye blocked for seven days and then reopened. Again, the visual cortex of these mice showed a shift in ocular dominance (Figure 1). The results suggest that effects of the enriched environment experienced by the parents had been passed down.

The mechanisms by which the influence of the enriched environments affects visual cortex plasticity is not yet clear. It may be passed through parental behavior or molecular mechanisms, or both. A prior study has shown that mother mice give higher levels of care to their pups in enriched environments and this affects visual development (Sale et al., 2004). Yet others have shown that the offspring of enriched mice have enhanced synaptic plasticity, even if they were raised by non-enriched foster mothers (Arai et al., 2009).

A bad night of sleep can cause a host of ill effects, including an increase in pain the following day. Human studies show that sleep deprivation increases discomfort and sensitivity to pain in lab settings (Lentz et al, 1999; Roehrs et al, 2006; Schuh-Hofer et al, 2013). But how poor sleep confers increased pain is not well understood. A recent study in JNeurosci begins to untangle the relevant circuitry by identifying specific brain regions with altered responses to pain following sleep deprivation.

To do this, Krause et al., 2019 monitored the thermal pain responses of 25 healthy young adults following a night of restful sleep and compared them to pain responses after a night without sleep. To determine each participant’s pain threshold for hot temperature, the researchers pressed a small metal plate called a thermode on the participant’s left leg and raised the temperature until the participant indicated it was painfully hot. The team found that after a sleep-deprived night, participants had a lower threshold for painful temperatures. 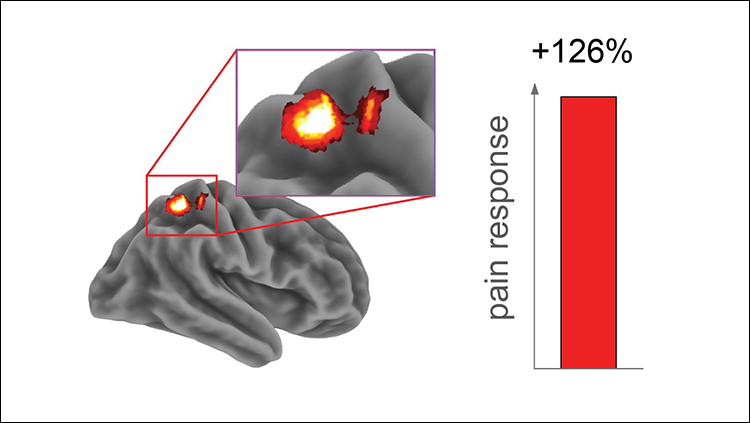 The team examined the brain mechanisms behind this sleep-deprived alteration in pain response with fMRI. Using each participant’s specific temperature pain threshold, the team found that pain-responsive activity in the somatosensory cortex was greater following the sleepless night (Figure 2). Conversely, the thalamus, nucleus accumbens, and insular cortex, regions with various roles in higher-order processing of pain and decision making, showed blunted activity in response to painful stimulation after sleep deprivation. The findings indicate that sleep loss amplifies pain processing in the sensory cortex and hampers higher-order modulation of pain processing.

The team also explored how more subtle and common fluctuations in sleep quality affect pain perception in people outside of the lab setting. This ecological study used Amazon’s Mechanical Turk service, in which people complete surveys and other tasks through an app. Sixty participants reported on their prior nights’ sleep with established sleep measurement questions over two mornings. In evenings, the participants recorded the pain they experienced over the day on a 100-point scale. The researchers found that people who had less efficient or poorer quality sleep reported an increased amount of pain during the day.

The authors suggest that modest improvements in sleep quality could reduce the experience of pain in both day-to-day settings and in hospitals. In fact, a prior study has already shown that napping can reverse the increased pain sensitivity caused by sleep deprivation (Faraut et al, 2015). Overall, the findings are relevant given the growing problem of insufficient sleep in many populations and the challenge of managing both acute and chronic pain.

Explore SfN’s journals at www.jneurosci.org and www.eneuro.org and discover the latest neuroscience research.