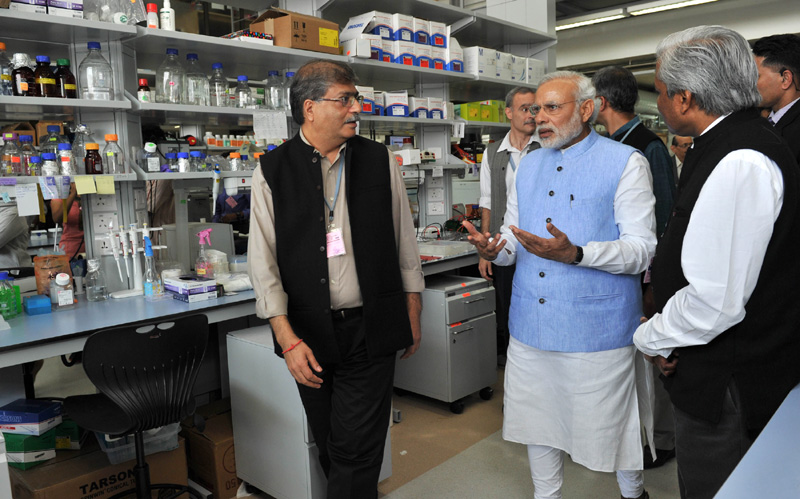 Indian Prime Minister Narendra Modi (center) talks with Sumantra Chattarji, director of the Centre for Brain Development and Repair in Bangalore, during a visit to the lab in February.

When Indian Prime Minister Narendra Modi visited a neuroscience lab in his country earlier this year, lab director Sumantra Chattarji was struck by the leader’s careful focus, probing questions, and thoughtful interactions with scientists and students.

“It was very clear that the PM was trying to understand the implications of basic research in the laboratory for the many challenges faced by Indian society,” said Chattarji, the director of the Centre for Brain Development and Repair in Bangalore. The center is a large-scale research collaboration focusing on autism spectrum disorders and intellectual disability that brings together experts from India’s National Centre for Biological Sciences and Institute for Stem Cell Biology and Regenerative Medicine (InStem) and the University of Edinburgh in Scotland.

Modi’s lab tour is a prime example of the growing interest in neuroscience by governments around the world. Conveying to policymakers and leaders like the prime minister why scientific research matters is incredibly important because the vast majority of research funds come from the government, Chattarji said. “There are huge advantages offered by such a one-on-one opportunity to provide direct and hands-on demonstrations of laboratory science,” he explained. “Such interactions allow us to directly convey ‘unfiltered’ information and generate curiosity about scientific questions/challenges that inspire our research — and thereby demystify the whole process and make it more accessible to the lay person.”

“And when that ‘lay person’ happens to be the leader of the largest democracy in the world — that makes it even more special!” he added.

Touring a laboratory helps policymakers understand how biomedical research happens and encourages them to make the responsible decisions about the funding of scientific research. The Society for Neuroscience can help SfN members arrange lab tours for their legislators to start building a positive and lasting working relationship.

During the February 18 visit, Chattarji gave the prime minister an overview of how the lab generates human cortical neurons derived from induced pluripotent stem cells and showed him living human cortical neurons under the microscope in an electrophysiology rig. “He was quite keen on peering through a microscope to locate these neurons on a cover-slip himself,” Chattarji said.

Modi asked about the state of research and diagnosis in autism spectrum disorders and intellectual disability in India and how progress is being made elsewhere in the world. “I explained to him how neurodevelopmental and neurodegenerative disorders pose a huge and growing health challenge in India,” Chattarji said. “We discussed the urgent need to bridge the divide between basic and clinical research to meet these challenges in India. I also highlighted the need for the Indian government to enable drug discovery and trials in India to meet the needs of the Indian population.”

Funding of scientific research in India has been increasing significantly during the past decade. Chattarji noted that this has inspired many young and talented Indian scientists to return to India to start research programs. “This represents a paradigm shift for the scientific community in India,” he said. “Thus, with new resources and talent, it is now possible to do the kind of science that was difficult earlier.”

According to the InStem website, Modi discussed the need for supporting Indian “discovery science” in the context of boosting the national economy and emphasized the need for spreading scientific temper amongst the school-going generation and for strengthening science as a viable career option.