Society for Neuroscience - BrainFacts.org Spotlight: Why We Can’t Think Logically About the COVID-19 Vaccines

BrainFacts.org Spotlight: Why We Can’t Think Logically About the COVID-19 Vaccines 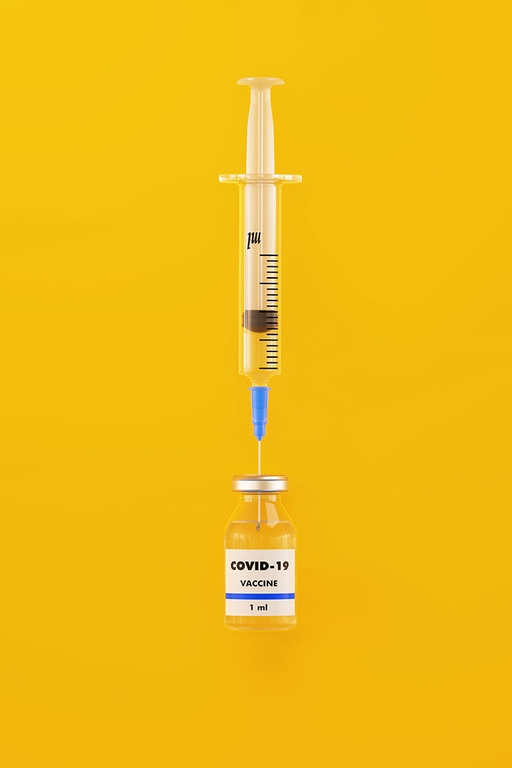 This article originally appeared on BrainFacts.org.

The rollout of the COVID-19 vaccines in the spring ushered in hopeful glimmers of post-pandemic life in the United States. But a dark cloud has crept over the horizon: not enough people are getting vaccinated. Operation Warp Speed produced vaccines in about a year, compared to the typical 74-month timeline. After a rapid burst of vaccinations in early 2021, daily rates stalled. One of the culprits behind that slowdown is vaccine hesitancy — “a delay in acceptance or refusal of vaccines despite availability of vaccination services,” as defined by the World Health Organization.

Though it’s normal and rational to have concerns about your health and medical care, hesitancy about COVID-19 vaccination has already had deadly consequences. Current COVID-19 vaccines are highly effective in reducing both the spread of the virus and the risk of death or serious illness in those who become infected. As the virus continues to spread among unvaccinated people, it will continue to mutate, increasing the likelihood of more transmissible and potentially deadly variants like Delta, which has hit younger people including children.

And yet, many adults have chosen not to get vaccinated — or to wait before they decide — often defending their choice with scientific-leaning sentiments, like a desire to see more data or pointing to low infection and death rates in their demographic. But there is a deeper issue at play: we don’t think logically about vaccines.

Hesitancy is not the same as holding anti-vaccine beliefs: an entire spectrum of vaccine acceptance exists, with anti-vaxxers comprising a tiny, extreme minority. Most adults fall somewhere in the middle, meaning they have questions, doubts, or vacillations but are not outright against vaccines. This phenomenon isn’t new: people have had qualms about getting vaccinated since the smallpox vaccine was invented in 1796.

Even when people purport to analyze facts about COVID-19 and the vaccines, they can come to a wide range of conclusions — some leading to dangerous behaviors. This can be explained by fuzzy-trace theory, which posits humans focus on the gist of information, rather than the information itself. “We're not saying facts are unimportant, but what has an effect on your decision is not the objective facts, but how you interpret the objective facts,” says Valerie Reyna, professor of human development, director of the Human Neuroscience Institute, and co-director of the Center for Behavioral Economics and Decision Research at Cornell University.

Gist drives decision-making, and it does a pretty good job most of the time — it saves time and leads to accurate decisions.

Interpretation of what facts mean varies from person to person. “You might take away a very different gist from information than the person next to you, because they have different background knowledge and experiences, and they interpret that message differently,” Reyna says. A lifelong California resident could hear the fact “It’s 65 degrees Fahrenheit,” and interpret the gist as “It’s cold outside.” A person from Minnesota would interpret the same fact as “It’s hot outside.” Gist drives decision-making, and it does a pretty good job most of the time — it saves time and leads to accurate decisions. In one study, Reyna and her colleagues found doctors made more gist-based diagnoses as they grew in experience and specialty.

Gist-based thinking is not inherently good or bad, but it requires sufficient background knowledge to be accurate. The average person doesn’t have an expert-level understanding of epidemiology, which can lead to inaccurate interpretations of infection and mortality rates. “When infections went above 1% in the community, the horse was out of the barn,” Reyna says. “That seems like a tiny number, right? It seems like such a low base rate, but epidemiologists will tell you, ‘Oh my God, that's a rampant thing.’”

Misinterpreting the gist throws off our ability to weigh the risks of getting vaccinated with the risks of staying unprotected. Lisa*, a 48-year-old in Fort Mill, South Carolina, feels that her chance of catching COVID-19 is so low that getting the vaccine isn’t worth the risk. “My exposure is very limited, I’m not going out much, except for grocery shopping and the necessities, so I feel like my risk of catching it is low,” she says. Mark*, a 39-year-old in San Antonio, Texas, echoes her reasoning. “I don’t know that I’m as concerned with it as it’s being portrayed,” he says. “If I had more underlying health issues or I was in the age range where it was higher percentage of death, I think I wouldn’t be as hesitant to go and take that vaccine.”

Lisa and Mark’s gist interpretations of the risks of catching and dying from COVID-19 make logical sense but don’t align with the interpretation of epidemiologists. The risk of suffering a negative consequence from COVID-19 dwarfs the risk of a negative consequence from the vaccines, Reyna says. Plus, the risk of catching COVID-19 is not a one-and-done probability. It increases every time you come in contact with people. “What's the cumulative probability that a person who doesn't take any measures is going to eventually become hospitalized and die?” Reyna says. “That cumulative probability is much higher than the one-time probability.” In an epidemiologist’s eyes, the safest decision is to get vaccinated.

Experiences are not invalid, but they can prevent us from assessing the risks accurately because of our perspective.

Personal experiences with COVID-19 complicate things further. Operation Warp Speed reminds Lisa of past experiences taking other new, cutting-edge treatments. “Both times the medicines have since been recalled and I was on them for years,” she says. Because of her prior experiences, Lisa interprets the gist of the vaccine’s quick development and approval as a sign of risk and lack of safety. Experiences are not invalid, but they can prevent us from assessing the risks accurately because of our perspective. “There's been millions and millions of doses given … and we were able to capture these very rare safety signals,” says Ève Dubé, a medical anthropologist and researcher at the Quebec National Institute of Public Health. “I don't think there's an evidence-based justification for that concern.”

Vaccines as a Mirror

Sometimes concerns about vaccines have less to do with the vaccine itself, and more to do with people’s attitudes toward government and science as a whole. This type of vaccine rejection often falls along religious lines. “All large religious groups in the U.S are more or less like the general public when it comes to vaccine acceptance, except African American Christians and white conservative Protestants,” said John Evans at a SciLine briefing for journalists. Evans is a professor of sociology and co-director of the Institute for Practical Ethics at the University of California, San Diego. The rejection doesn’t stem from the religious beliefs themselves, but from social issues surrounding the religion, Evans says.

For Black Christians and other Black people who are vaccine hesitant, their wariness calls to the history of racism and abuse at the hands of the government and medical institutions. Austin*, a 24-year-old in Chapel Hill, North Carolina, felt uneasy about the delayed information surrounding vaccine booster shots. “Especially being an African American, it seems deceitful,” he says, “and the government doesn't have an excellent track record when it comes to vaccinations of African Americans among other things.” Sharing data about the safety and efficacy of the COVID-19 vaccine is not enough to overcome this distrust and apprehension.

Where statistics and data fail, the gist does help. Gist-based messaging can look like reframing vaccines to trigger one core value instead of another. Many Americans share the core values of individual freedom and protecting the wellbeing of others, but the vaccine-hesitant often focus on the individual risks of vaccination rather than the collective benefit. This can muddle decision making.

Both Lisa and Mark felt they weren’t at a high risk for catching COVID-19 because of their health, age, and lifestyle, which contributed to their vaccine hesitancy. “Everyone I’m around is vaccinated; I don’t feel I’m putting them at risk,” Lisa says. But this mindset conflicts with the epidemiological perspective: stopping the spread of COVID-19 requires vaccinating as many people as possible, even those with low personal risk.

Gist-based messaging can look like reframing vaccines to trigger one core value instead of another.

Effective messaging draws focus to this distinction. “The message itself should focus [on the fact] that the reason you’re getting a vaccine is for the benefit of the community,” said Rupali Limaye at a SciLine briefing for journalists. Limaye is the director of Behavioral and Implementation Science at the International Vaccine Access Center and faculty member at the Johns Hopkins Bloomberg School of Public Health. “Making this decision about the vaccine is not an individual choice. It also affects those that are in your community that you likely care about.” Rather than bashing the value of personal freedom, reframing the issue can help people arrive at a different gist interpretation. For white conservative Protestants, reframing can incorporate religious messaging, like how vaccines are a way to love your neighbor, Evans says.

Lisa ended up getting vaccinated in June because of summer travel plans. Her perception of her personal risk changed because she knew she would come into contact with more people. “I hear the fear of the next wave, the mutation; I don’t want to perpetuate that or cause the virus to get worse,” Lisa says. The community risk was “something I thought about, but I don’t feel that that was a deciding factor for me.” Most of her conversations with friends and family centered around individual risks and benefits — perhaps more community-based messaging would have resulted in an earlier vaccination.

People can make a difference by speaking with their loved ones — but it’s important to approach the conversation with care. “We should try to listen carefully with empathy instead of just trying to push back on the person,” Dubé says. “That's not helpful and people will shut down the discussion.” These discussions take work, but they have a long-term payoff: being prepared for the next public health threat. “The key about gist is that it's understanding the information, not just memorizing the right answer. Teaching people the gist is a long-term investment,” Reyna says. Taking the time to teach people the gist equips them to navigate complex information and arrive at the best public health decisions — like getting vaccinated.

*Lisa, Mark, and Austin requested we only use their first names.