Society for Neuroscience - Inside Neuroscience: Harnessing the Power of Glia and Stem Cells

Inside Neuroscience: Harnessing the Power of Glia and Stem Cells 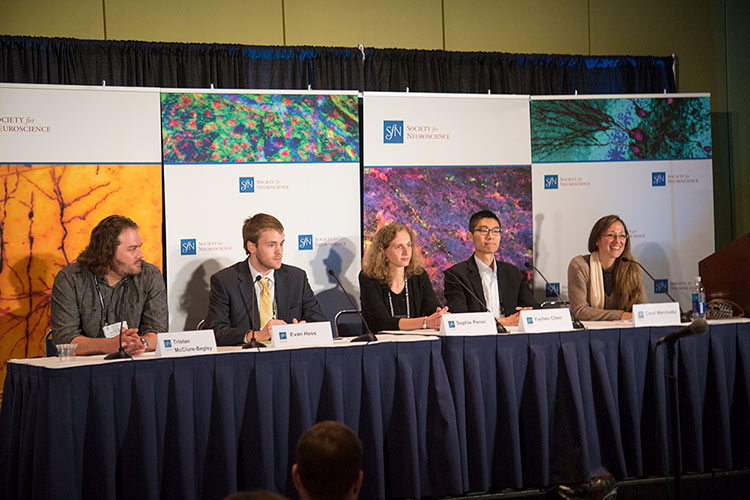 Research presented during a press conference at Neuroscience 2015 shows non-neuronal cells, such as glia and stem cells, hold great promise for both understanding and treating neurological diseases.

Disability from brain injury and illness results from damaged or malfunctioning neurons. But research presented during a press conference at Neuroscience 2015 shows non-neuronal cells, such as glia and stem cells, hold great promise for both understanding and treating neurological diseases.

This fast-growing field of research was also the focus of SfN’s recent virtual conference, “The Other Brain Cells: New Insights Into What Glial Cells Do.”

Ischemic stroke blocks blood flow to the brain, killing neurons by depriving them of oxygen and nutrients. As neurons die, reactive astrocytes at the site of injury proliferate to form a protective barrier. But, if left untreated for even a few hours, a second wave of injury can result, as the glial defense soon forms a scar that limits regrowth of neurons and hinders recovery.

Two research groups presenting work in the press conference have independently demonstrated that proliferating astrocytes can be reprogrammed into functional neurons. This glia-to-neuron conversion could be a novel therapy for stroke recovery and for treating other brain disorders that involve a loss of neurons.

“We think the pool of glia cells that are present after injury could be converted directly into neurons to replace neurons that have been lost,” said Sophie Péron, lead author of the work from the research group out of Johannes Gutenberg University in Mainz, Germany. “Our strategy is to play with molecular pathways to try to convert the identity of the cell.”

Yuchen Chen, a graduate student with Gong Chen at Pennsylvania State University, carried out a similar study that identified a different agent of glia-to-neuron conversion. They injected viruses that express a protein known as NeuroD1 into the brain tissue of mice with experimentally induced strokes.

Evan Hess, a graduate student working with David Baker at Marquette University in Milwaukee, has found evidence that astrocytes play an important role in compulsive behaviors.

Astrocytes release the excitatory transmitter glutamate, but with a mechanism that differs from the one used by neurons. Rather than fusing vesicle and cell membranes, astrocytes release glutamate using a transmembrane transporter called system xc-, which appears to be disrupted in some forms of mental illness.

Researchers genetically altered rats so they had a nonfunctioning system xc-, blocking the rats’ ability to release glutamate from astrocytes. They then conducted several tests to evaluate the animals’ behavioral flexibility. One experiment involved having the rats learn and then relearn the “rules” of a maze to obtain a food reward. They found rats with an impaired ability to release glutamate were significantly worse at figuring out the rules of a new maze than rats without the glutamate impairment — a sign of reduced cognitive flexibility. Other research has linked poor cognitive flexibility to both addiction and OCD.

“Our results suggest that astrocytes can alter communication between neurons and play an active role in maladaptive behaviors,” Hess said.

Tristan McClure-Begley, a postdoc working with William Old at the University of Colorado Boulder, is using stem cells to tease apart factors that influence the severity of Down syndrome.

Possessing an extra copy of chromosome 21 causes Down syndrome, but the resulting disability ranges from mild to severe. A more detailed understanding of exactly how the extra chromosome alters brain development or functioning has been thwarted by the lack of a good animal model. Mice don't have a chromosome that corresponds to the human chromosome 21, for example.

McClure-Begley and colleagues used induced pluripotent stem cells from a sample of skin cells obtained from an individual with Down syndrome to produce cerebral organoids — complex, self-organizing, three dimensional tissues that recapitulate cortical development. “We get a window into what CNS development looks like from a cellular and molecular level,” he said.

Some of the cell lines lost the extra chromosome, which allowed McClure-Begley and colleagues to compare the proteomes of cerebral organoids with and without the genetic defect that causes Down syndrome. Their analysis revealed proteins involved in cell signaling pathways relevant to nervous system development and organization were significantly altered. Some protein levels were elevated and others reduced, rather than a simple 50 percent increase that might be expected from the extra genes.

The team hopes to obtain cell lines from multiple individuals with Down syndrome who have varying degrees of disability in order to discern which patterns of genetic disruption are most harmful. “Our hope is we will be able to correlate clinical severity with a molecular signature from these tissues to come up with tailored, personalized treatments to improve the quality of life,” McClure-Begley said.

Findings such as these are changing scientists’ understanding of the importance of and potential applications for glia and stem cells.