“Future of Neuroscience” is a series of interviews with rising members of the field. A forward-looking complement to SfN’s “History of Neuroscience” autobiographies of distinguished researchers, interviewees reflect on their emerging careers and share thoughts on where they believe neuroscience is headed. 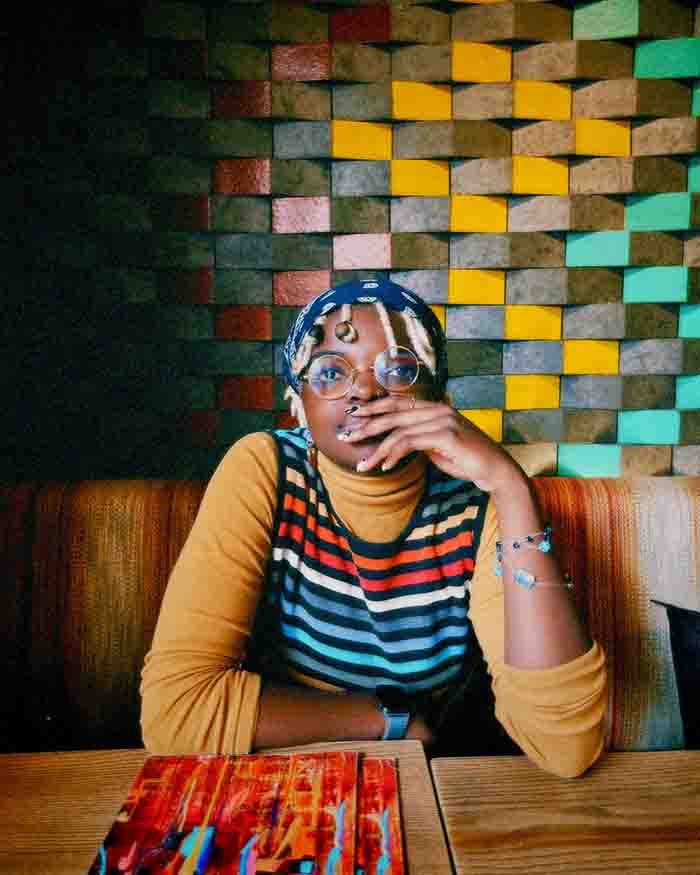 Sade Abiodun is a neuroscientist by day and filmmaker also by day. She is a third year PhD candidate at the Princeton Neuroscience Institute. Her work focuses on neurocinematics — the neuroscience of film — and explores naturalistic approaches to examining affective and cognitive states. She received her B.S. with distinction in neuroscience from Duke University in 2018 and began working as an independent filmmaker and experimental artist in tandem with pursuing her intellectual interests. In 2022 she was named a Ford predoctoral fellow and a storyteller-in-residence at the Diverse Intelligences Summer Institute. Her work (academic and artistic) has been featured internationally at numerous film festivals, academic conferences, and publications. She hopes to bridge the gap between science and the arts through the creation (and study) of dynamic visual experiences that center multi-dimensional storytelling.

Neuroscience Quarterly (NQ): Why did you choose to pursue a career in neuroscience?

Sade Abiodun (SA): I pinpoint my father as the main influence on my pursuit of neuroscience for many reasons. I grew up between the United States and South Africa; both of my parents are immigrants. When I was applying to college, all I really had in mind at the time was that I wanted to choose a path that would lead me to medical school. But my dad paused and asked me, “How about the brain? There's a lot of cool, interesting things being done there.” At the time I thought, “No Dad, that's your dream. I want to do something completely different.”

I started my undergraduate career at Duke University, where they had an amazing program for first year students called FOCUS clusters, which offered a range of classes centered on a specific theme. I was in a FOCUS cluster called “Exploring the Mind” and took neurobiology and neurolinguistics courses from my first semester of college. This was also my gateway into hands-on research, as I became a research assistant in a neurobiology lab during that same semester.

I realized quite quickly that I loved being engaged in continuous academic and intellectual conversation around ideas – getting to shape and challenge, revisit and reevaluate – rather than asking questions solely for the sake of diagnosis or clinical application. I learned it was really important for me to consistently be curious (and critical) about scholarly process.

NQ: What are you studying in your PhD, and what drew you to that field?

SA: I study neurocinematics, the neuroscience of film. My path to this field was anything but linear. During my last semester of undergrad (whilst completing my thesis) I ended up taking a cinematography class and absolutely fell in love with it. I’ve always loved visual media, always loved art, but had not thought much about the mechanistic process of media-making.

By the time graduation was approaching, I’d come to terms with my pivot from my medical school dreams but wanted to get more research experience to explore my interests and solidify my desire to pursue academia. I worked in a neuroeconomics (decision making) lab at Duke as a lab manager and research specialist, and it was during this window that I also began leaning into some of my creative pursuits (i.e., making my first short film, Godspeed). Making the film – especially while working full time and prepping for grad school – was a labor of love, but definitely worth it. I’m honored that the film resonated with people the way that it did, and it has since been featured by several festivals, art galleries, and curators.

During that timeframe I was introduced to the work of Dr. Janice Chen – in collaboration with my now co-advisors Dr. Uri Hasson and Dr. Ken Norman – on what I now refer to as neurocinematics. Dr. Chen presented research using naturalistic stimuli, specifically episodes of the BBC’s Sherlock, to explore memory performance and brain synchrony. I was blown away by the fact that neuroscience research was being done with the kind of media that I would watch every day. The minute that I heard about this work, I reached out to Dr. Chen and asked, “What do I have to do? What do I have to know to be able to do what you do?” Her wisdom was invaluable, and by the time I was applying to grad schools, I knew that I wanted to exist somewhere in the realm of merging media and neuroscience.

It was almost beyond my own imagination to end up at the source and work directly with Dr. Hasson, who coined the term ‘neurocinematics’ and was instrumental in pushing the field towards legitimacy. In one of our first conversations, I remember him saying “I brought film to the neuroscientists, and you’re trying to bring neuroscience to the filmmakers. That’s no easy feat!” He was right.

"...it was during this window that I also began leaning into some of my creative pursuits (i.e., making my first short film, Godspeed)."

NQ: What are some of the experiments and tools you use to study neurocinematics?

SA: Right now I'm interested in trying to develop a multidimensional framework for capturing the experience of emotion, specifically in relation to emotional films and television.

There are numerous methods that allow us to collect different types of data (neuroimaging and behavioral) and apply machine learning tools to extract all sorts of information on sentimentality, emotion, and dynamic response. We hope to marry the quantitative and qualitative metrics to capture narrative-driven emotional experience response with high dimensionality.

NQ: What are your goals for your career as a whole? Where do you hope your work will take you over the next few decades?

SA: For a while I’ve felt like I'm in an interesting place in terms of cementing my path as a scholar and neuroscientist, all while simultaneously developing my artistic practice and communities. So much of my work has involved mediating conversations between my peers and mentors in academia and my peers and mentors in creative spaces, to the point where being the interdisciplinary ‘bridge’ has become a core component of my identity. The career I envision involves not just choosing one world or the other but continuing to find ways to dynamically merge and balance those worlds.

NQ: What's something from your career so far that you're most proud of?

SA: This past summer I got to participate in my first artist residency at an interdisciplinary institute in Scotland. This program brought together scholars and storytellers from various countries and disciplines to explore ideas related to knowledge, intelligence, and meaning making. I was shocked to find myself so at home in the midst of other multimodal thinkers and was able to work on collaborations related to my ongoing PhD research, contribute to projects and discussions tied to my interest in neuroethics and neurophilosophy, and develop my latest artistic project exploring metacognition and collaborative creativity. All while overlooking a beautiful Scottish shoreline for a month. It was an experience like no other!

Aside from that, another proud moment (that I’m still recovering from) came in the first semester of my third year. I passed my PhD qualifying exams (effectively earning my Master’s degree) in the same week that I finished a film and was hired to edit for New York Fashion Week. When I started grad school, I felt like I was stuck in a perpetual loop of jumping on a trampoline: always in motion, always bracing, never quite touching solid ground. It’s been a journey to witness myself finally moving into a space where I can trust my eyes, my ears, and my mind, even as they bounce between so many different worlds.

NQ: How do you hope the field of neuroscience will grow and change? What do you think could make it better?

SA: I hope that neuroscience and neuroscientists return to a place where our main fuel, our main motivation, is our curiosity.

I think neuroscience is beautiful. I think it's magical, creative, elegant. But I also think sometimes we can get so focused on our particular questions or schools of thought that we forget to zoom out and not only appreciate the beauty, but the ability to merge ideas, change perspective, and modulate how we think about thinking. I’m a better neuroscientist and scholar not just because of the art I make, or the work I do, but because of my persistent urge to remain curious and creative in the ways that I imagine scientific practice and intellectual community taking form. The brain is an ever-evolving organ, shouldn’t we be as well?