Society for Neuroscience - Inside Neuroscience: Exploring the Intricate Relationship Between Sleep and Memory

Inside Neuroscience: Exploring the Intricate Relationship Between Sleep and Memory 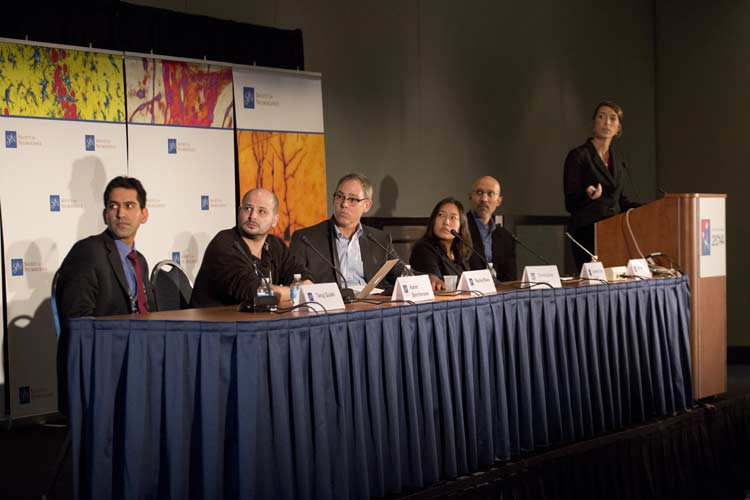 During a press conference at Neuroscience 2014, presenters described how new research findings could allow us to harness the power of sleep to enhance memory, improve control of neuroprosthetic devices, and protect the brain from chronic sleep deprivation and traumatic brain injury.

Why we sleep remains one of science’s greatest unsolved mysteries. However, researchers are beginning to unravel and understand the intricate neurobiological mechanisms involved in the process of sleep.

During a press conference at Neuroscience 2014 highlighting the complex relationship between sleep and memory, presenters explored how new research findings could allow us to harness the power of sleep to enhance memory, improve control of neuroprosthetic devices, and protect the brain from chronic sleep deprivation and traumatic brain injury.

“One of the most profound effects of a night of sleep is not just the maintenance [of the brain] but actually the improvement or enhancement in our memories, in our ability to remember things,” said Ravi Allada, MD, professor and chair of the department of neurobiology at Northwestern University and press conference moderator.

Remembering how to drive to your grandmother’s house requires the use of your hippocampus — the brain region critically involved in spatial navigation as well as remembering facts and experiences. Solidifying directions and other memories in your brain requires protein synthesis, or the process of making new proteins. Recently, sleep loss has been shown to profoundly affect hippocampal function, although it is unknown whether protein synthesis within this brain region is also impacted.

To examine the effects of sleep deprivation on protein synthesis and memory, Jennifer Choi Tudor, PhD, and her colleagues at the University of Pennsylvania first identified a key protein involved in protein synthesis that was shown to be reduced in the mouse hippocampus following sleep deprivation. Researchers then injected mice with a virus that increased production of the protein — called phosphorylated eukaryotic translation initiation factor 4E binding protein (4EBP2) — in the hippocampus. Later, these same mice were trained on a spatial memory task that required them to remember the locations of different objects within an arena. Finally, the mice were subjected to sleep deprivation and tested again.

Researchers found that sleep-deprived, virus-injected mice performed the task just as well as non-sleep-deprived mice, while sleep-deprived mice without additional 4EBP2 struggled. The findings suggest that dysfunction of the 4EBP2 protein synthesis pathway could account for memory deficits following sleep loss. It also indicates that the presence of 4EBP2 alone could preserve memory after sleep loss.

“We have begun to identify a molecular fingerprint for sleep loss,” Tudor said. “Increasing protein synthesis prevents memory deficits induced by sleep deprivation. We have finally started to understand that protein synthesis is critical for sleep-dependent memory.”

According to the Bureau of Labor Statistics, almost 15 million people in the United States work outside the usual 9 a.m.–5 p.m. workday. Alternative work schedules have been shown to significantly alter normal sleep-wake patterns and can lead to adverse health effects such as increased inflammation, metabolic changes, and cognitive dysfunction.

Christopher Colwell, PhD, and colleagues at UCLA are interested in understanding the complex mechanisms underlying cognitive dysfunction associated with disruptions in the sleep-wake cycle. To investigate these changes, the researchers misaligned sleep patterns in mice by feeding them during their normal sleeping hours. Following these changes in sleeping patterns, the mice were tested on learning and memory tasks and the researchers documented physiological changes in the brain.

Since so many people experience disruptions in their sleep-wake cycles, Colwell and his colleagues are investigating whether the timing of meals can be used to counteract the negative effects of these disruptions.

Traumatic brain injury (TBI) has reached epidemic proportions in the United States, affecting as many as 2.5 million people a year. More than 70 percent of TBI survivors experience sleep-wake disturbances, such as excessive sleepiness. Despite these observations, the connection between brain injury and sleep remains largely unknown.

Rachel K. Rowe, PhD, and colleagues at the Barrow Neurological Institute at Phoenix Children’s Hospital had previously shown that increased brain inflammation contributes to excessive sleepiness following brain injury, which the researchers termed “post-traumatic sleep.” Excessive inflammation can also lead to secondary injuries after TBI, resulting in problems with cognitive and motor function. In the current study, the researchers investigated whether two new anti-inflammatory drugs could reduce the excessive sleepiness after TBI, presumably by reducing inflammation in the brain.

These studies suggest that post-traumatic sleep may serve as an important indicator of brain inflammation, and may be useful as a post-injury diagnostic marker. “If you can alleviate post-traumatic sleep, you have a prediction of what [the patient’s cognitive] recovery is going to be,” Rowe said.

Sleep is essential for learning and memory. When you learn something new, neurons fire in a specific sequence. What you learned is then “played back” during sleep, with neurons firing in the same specific sequence to strengthen the memory. Building on this idea, Karim Benchenane, PhD, and colleagues at the National Center for Scientific Research in Paris used a brain-computer interface to test whether they could implant artificial memories into a rodent’s brain while it slept.

First, the researchers observed the specific pattern of neurons that fired when the animal was in a particular area of its environment. They then monitored neural activity while the animal was asleep, and a computer detected when neurons fired in this same pattern, at which point it stimulated the brain’s reward pathway, strengthening this neuronal firing pattern. Using this reward stimulation method, researchers were able to create an association between the memory and the reward, essentially implanting a fake memory into the brain of the rodent such that when the animal enters the environment upon waking it would expect a reward.

Indeed, the researchers found that, upon awakening, the animal would preferentially go to the area of the environment reinforced during sleep, presumably expecting a real-life reward.

This experiment shows that neurons activated during sleep convey the same information as in the awake state but also that it is possible to create false memories using this novel reward-stimulation method.

The ability to manipulate memories during sleep may be particularly helpful in the treatment of post-traumatic stress disorder, the idea being that the reward-stimulation method could be used to reduce negative associations with particular places in the environment, Benchenane said.

Neuroprosthetic devices are a revolutionary way in which patients with severe disabilities can interact with their environment. Through brain-computer interfaces, these devices monitor brain activity and allow the brain to directly communicate with and move an external assistive device, like a robotic arm. Using one such device, researchers trained rats to control a waterspout with their minds.

Understanding that sleep plays an essential role in memory consolidation, the process of transforming short-term memory into long term memory, Tanuj Gulati, PhD, and colleagues at the University of California, San Francisco, hypothesized that sleep could improve the precision with which the rodents could control the neuroprosthetic device. To investigate this idea, researchers tracked neuronal activity in the rodents’ brains as they were trained to control the neuroprosthetic device. They found that those neurons controlling the waterspout fired robustly, while other neurons were silent. Later during sleep, they saw the active neurons fired in the same pattern over and over again. Furthermore, when the animal spent more time asleep, it was better able to control the waterspout upon awakening.

“We wish to delve deeper into these processes — well enough to be able to intervene and augment plasticity during sleep that allows rapid learning with neuroprosthetics,” Gulati said.

Sleep and memory processes are complex and intertwined. Understanding why we sleep is an important question, and as Allada states, “It is highly relevant to understanding how the brain functions, as well as in treating brain disorders.” The more we know about how sleep affects memory, the better we will be able to harness its power to protect the brain, enhance memory, and even improve the control of neuroprosthetic devices.