The Brain May Need Iron for Healthy Cognitive Development 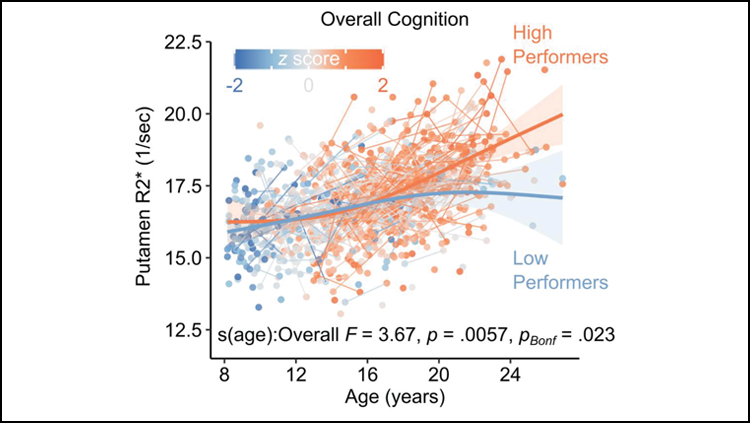 Iron levels in brain tissue rise during development and are correlated with cognitive abilities, according to research in children and young adults recently published in JNeurosci. Future work could lead to iron supplementation as an intervention for atypical cognitive development.

Brain cells stay healthy in part by storing iron. It is most concentrated in the basal ganglia, a brain region that filters incoming information from moment to moment and suggests the best action to take. Low iron in the basal ganglia during early life is linked to cognitive impairment, yet we don’t know how iron levels change during typical development.

Larsen et al. examined brain iron levels through magnetic resonance imaging brain scans from the Philadelphia Neurodevelopmental Cohort, a dataset of scans from over 1500 children and young adults ranging from age eight to twenty-four. The research team found that brain iron levels in the basal ganglia steadily increase throughout development and, in two subregions, continue to increase into adulthood. Decreased brain iron in one subregion, the putamen, was correlated with impaired performance on cognitive tasks involving reasoning and spatial processing, suggesting that brain iron is needed for healthy cognitive development.

Read the manuscript in JNeurosci: Longitudinal Development of Brain Iron Is Linked to Cognition in Youth