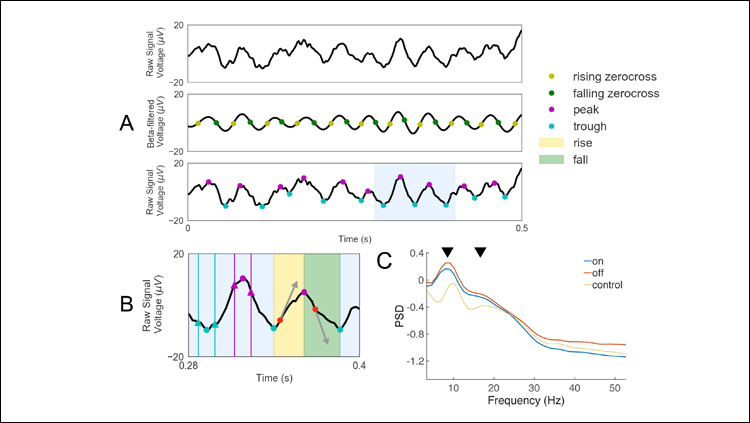 Novel measures of brain activity associated with Parkinson's disease (PD) can be detected with scalp electrodes, according to a new analysis published in eNeuro. Such a marker of PD — detected using a noninvasive, affordable approach — could improve management of the disease by doctors and patients, particularly in rural areas.

Measuring PD-related brain activity using these novel methods had previously only been demonstrated in patients who have had electrodes surgically implanted deep in their brain. Nicole Swann and colleagues at the University of Oregon and the University of California, San Diego report that similar information can be obtained by recording electrical activity from the surface of the head with electroencephalography (EEG). By analyzing previously published EEG data from PD patients and healthy individuals, the researchers were able to distinguish between the two groups and within the PD group when patients were on or off their medication.

These results suggest the shape of beta oscillations is abnormal in PD and may be a promising electrophysiological indicator of disease state. Recording this signal with EEG is straightforward and, after additional validation, could potentially be developed into wearable technology for patients to monitor disease-related brain activity even in patient's own homes.

Read the manuscript in eNeuro: Characteristics of Waveform Shape in Parkinson's Disease Detected with Scalp Electroencephalography