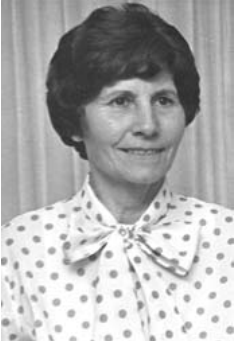 Professor Wanda Wyrwicka was born in Pabianice (Poland) on September 8, 1912. She studied Biology at the University of Poznañ and graduated in 1937. The beginnings of her scientific career in Poznañ, in the biology of insects, were hampered first by material problems that forced her to accept a post of a biology teacher in a high school in Sandomierz, and then by the Second World War. She survived the war first in Pabianice and then in Warsaw working in Social Service and taking an active part in the Resistance Movement. She experienced two compulsory resettlements and the Warsaw Uprising.

After the war she returned to Poznañ and in 1947 defended her PhD, presenting a dissertation on the external parasites of mice and rats. In 1946 she decided to move to Lodz, and in 1947 began working at the Department of Biology of the Lodz University, where the Laboratory of Physiology of the Nervous System was headed by Prof. Jerzy Konorski, who was also the head of the Department of Neurophysiology of the Nencki Institute, then located in Lodz. Her first research at the Lodz University was done with Prof. Liliana Lubinska and concerned nerve regeneration, but she quickly got interested in the behavioral research of Prof. Konorski and joined his group, doing research in the facilities of the Nencki Institute. In 1951 she formally moved to the Nencki Institute and was employed there till 1968, finally being nominated Professor and head of a Laboratory.

For the rest of her life Prof. Wyrwicka was interested in the mechanisms of conditioned reflexes. While at the Nencki Institute, she conducted a long series of experiments with the aim of learning how sensory stimuli and drive interact in eliciting the conditioned motor reaction. On the basis of those multifaceted experiments she postulated an associative model of those interactions, later known as the "Wyrwicka’s triangle", that was at that time a major step forward in understanding the mechanisms of conditioning. According to the model, external stimuli are in the same time influencing the "center of conditioned reflex" and the "alimentary center", the latter being the center of a drive. In most cases the additive activity of both those centers focused on the "motor center" of the conditioned reflex was necessary to activate it, although very strong conditioned stimuli could elicit the reflex in the absence of a drive. This conceptual model allowed for understanding a large volume of experimental data that were earlier confusing. It was one of the greatest scientific achievements of the Department of Neurophysiology at the Nencki at that time.

In the late 1950s, when the Nencki was moved to Warsaw, Wyrwicka started to be interested in the physiological organization of the "drive centers". She investigated the organization of hypothalamus with the recently introduced method of electrical stimulation, which he learned during her scientific visit to Sweden in 1957. She found that stimulation of the lateral hypothalamus elicited the previously learned instrumental reflexes in satiated animals, while stimulation of the ventromedial hypothalamus inhibited the reflexes in hungry animals. She was one of the first to postulate the existence of the "hunger center" and "satiation center" in the hypothalamus. This pioneering research on the regulation of feeding activity gave an anatomical substrate to some of the "black boxes" on the diagrams of interactions during execution of the conditioned reflexes. Results of the experiments were published in many papers, among them two papers in Science (in 1959, with C. Dobrzecka and R. Tarnecki and in 1960 with C. Dobrzecka). The experiments were conducted on various species (dogs, cats, rabbits), but the best remembered in the Nencki Institute are her goats, hungry, satiated or defensive depending on the place that was stimulated in their brains.

In 1962-3 Wyrwicka received a grant and went to USA to do research at the Yale University, where she had got in contact with Dr. Neal E. Miller, the pioneer of biofeedback; at the University of Michigan, where she collaborated with Prof. Robert Doty, and at UCLA, where she collaborated with Dr Carmine D. Clemente and another pioneer of biofeedback, Dr. M.B. Sterman. Their research on conditioning of the EEG sleep pattern was published in Science in 1962. From that time Wyrwicka started exploring the role of basal forebrain, thalamic and brainstem centers in elaboration and execution of conditioned reflexes. In 1966 she went again to USA for scientific collaboration with the Brain Research Institute at UCLA, again invited by Dr Clemente and in 1968 she decided to stay there permanently. Her decision was regretted at the Nencki Institute as a loss of an eminent member of its staff.

At the UCLA she worked on both biofeedback and hypothalamic regulation of eating and drinking, but her most important publications from that period deal with the problem of imitation in animal behavior, e.g. imitation of the mother’s by her kittens (the famous cats eating bananas). Her hypotheses about the unconditioned imitation reflex that would be especially active in the infancy and about its role in the development of food preferences and idiosyncrasies, as well as about the importance of imitation in learning of optimal behavior by young animals were the major interest of Prof. Wyrwicka in her late years. These ideas had many practical applications and were also one step ahead of the present wave of ethological research, e.g. on chimpanzees.

She was very active all her life: Her last research paper was published in 2001 (Physiol. Behav. 73: 493-497). Altogether, she was an author of 76 research papers, eight reviews and articles on the history of behaviorism and five books. Her book on imitation in human and animal behavior was recently translated into Polish. Many of her papers were published in Acta Biologiae Experimentalis (the earlier title of ANE), others in the most prestigious neuroscience journals. Prof. Wyrwicka was the sole author of about half of her papers, and the first author of almost all others. This naturally high activity masked the series of several silent strokes since 1994. They were not correctly diagnosed and slowly eroded her ability to function as fully as before, but it was thought to be just normal aging.

She passed away on March 14, 2002 at the age of 89, after a final stroke that incapacitated her on February 4, 2002. At a memorial for Prof. Wanda Wyrwicka in Pacific Palisades, Dr. Clemente, her department chairman, delivered an extensive eulogy of her history, as he came to know her from the time he met her until the present. He was very grateful to have known her and delighted with her accomplishments. Professor Wanda Wyrwicka inspired many people with her inquisitiveness, inventiveness, enthusiasm and good will. If anyone ever needed help or encouragement Wanda was always ready to help. Her wartime hardships and experiences made her sensitive to the poverty and misfortune of other people and she was always quick to make a donation. She will be greatly missed by her family, colleagues and friends. Members of the Nencki Institute, in which Prof. Wyrwicka spent some of her most productive years, honor the memory of our eminent colleague whose achievements made a lasting contribution to neuroscience.