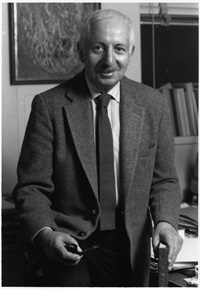 Philip Siekevitz, an original member of the ASCB and its first Council as well as the Society’s sixth president, died on December 5 at the age of 91. He participated in many significant advances in the field of modern cell biology.

Siekevitz was born in 1918 in Philadelphia to Joseph and Tillie, garment workers who created their unique last name on emigrating from Russia. His interest in biology began at Olney High School, where Siekevitz read Paul de Kruif’s Microbe Hunters. After high school, he worked two years as a picture framer to earn enough money to attend The Philadelphia College of Pharmacy and Science; he earned a B.S. in biology there in 1942. He served in the U.S. Army Air Force, first in Georgia to learn how to decontaminate U.S. airbases after chemical warfare attacks. Then he continued his service in California as a medical technician, applying the Wasserman test for syphilis to returning troops.

Thanks to the GI Bill, Siekevitz studied biochemistry at the University of California in Berkeley, receiving a Ph.D. in 1949 under David Greenberg. His thesis described the metabolism of the amino acids glycine and serine in liver slices by using the newly discovered tracing technique with the isotope carbon 14. As one of the first NIH postdoctoral fellows, he worked in the Harvard University laboratory of Paul C. Zamecnik (1949-1951). He demonstrated for the first time that well-defined subcellular fractions could be used in in vitro systems to study protein synthesis. He was also the first to demonstrate that energy in the form of ATP was necessary for incorporation of amino acids. He then joined Van R. Potter’s laboratory at the University of Wisconsin, Madison (1951-1954) as an oncology fellow. There he made important contributions studying the control of energy metabolism in mitochondria.

After reading Siekevitz’s papers on protein synthesis, Keith Porter and George E. Palade invited him to join their laboratory at The Rockefeller Institute for Medical Research (now University). He moved rapidly from Assistant to Associate (1959), and then to full Professor (1966).

Siekevitz spent the next twenty years working with Palade to pioneer an integrative approach using biochemistry and morphology to study structural and functional properties of subcellular organelles. This work encompassed studies in pancreatic cells as a system for protein synthesis and secretion. It involved the isolation and description of ribosomes (the major sites of protein synthesis in the cell); protein biosynthesis; and the role of the endoplasmic reticulum in the secretory pathway. Siekevitz then became interested in the organization, function, and differentiation of several intracellular membranes in an effort to determine how the many membrane components function together as a unit, and how they are differentially formed. He developed the concept that cellular membranes are dynamic structures that change during development or environmental stress.

Siekevitz became head of the laboratory of cell biology when Palade left for Yale in 1973. He then changed focus to study membranes from the nervous system and the events occurring at both sides of the neuronal synapse (the junction between nerve cells where chemical signals are transmitted from cell to cell). He identified an important structural element at the synapse called the postsynaptic density (PSD). PSD is a disk or ring of proteins that appears to modulate neuronal transmissions. Siekevitz and his colleagues determined which proteins, such as cytoskeletal elements, neurotransmitter receptors, and ion channels, are attached to the PSD. They then began to unravel interactions among the many protein components of the PSD. This work on the structure and function of synapses led to an understanding of the cell biological basis of plasticity, including learning and memory, in the central nervous system.

Siekevitz was particularly proud of a program he instituted at ASCB that encourages an early interest in science by allowing high school students to attend the Society’s annual meetings. In addition, he and Ariel Loewy reached out to the next generation of productive scientists by co-writing the first text of modern cell biology, Cell Structure and Function (1963; third edition, 1992). Its goal was to acquaint undergraduates with the biological activities and personality of the cell by describing its range of properties that are associated with all living organisms. It was translated into many languages.

Siekevitz was consultant to numerous scientific organizations, including the Panel on Molecular Biology of the National Science Foundation, the National Research Council, the National Cancer Program of the National Cancer Institute, and the International Cell Research Organization of UNESCO. He was an outspoken advocate for the social and moral responsibilities of scientists engaged in basic research to inform the public about the potential risks involved. A founding member and treasurer of the New York Scientists Committee for Public Information, he wrote extensively on science and public policy, in articles that appeared in The Nation, The New York Times, and Nature.

Siekevitz loved New York City, music, art, architecture, and travel to Italy and Mexico. While at home he enjoyed playing piano, particularly pieces by Mozart and Beethoven. On retiring from active research, Siekevitz returned to an early love of writing short stories that began during his Army duty. He was quickly successful when two were published in the annual New Directions series. During retirement, he wrote a series of ten impassioned short stories called “The Unknown Mozart.”

On a personal note, Phil’s keen interest in the history of modern cell biology was a great help to me. Not long ago he assisted in recruiting many contributors to, as well as wrote several essays for, a study of the origins of this science provisionally titled Entering an Unseen World.

Reprinted by permission of the American Society for Cell Biology (www.ascb.org) from ASCB Newsletter (April 2010) 33:1. For more information contact ascbinfo@ascb.org.