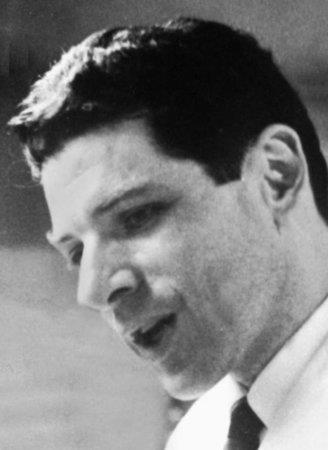 Jill Ross Stein has a cherished photo of her father, Leonard Ross, and her son, Harry Ross Stein, at the Rodin Museum in Paris in June 2011. They are seated on a bench and her father is pointing at Rodin's "Gates of Hell" and very seriously explaining something to Harry, then 12, and Harry is taking it in.

It would surprise no one that Leonard Ross knew all about Auguste Rodin, as he seemed to know all about so many subjects in science, history, culture, music, geography - you name it.

"My son used to say he didn't need Wikipedia with his grandfather around," Jill said. "He was a born educator. He loved to impart his knowledge, whether to medical students or children. He loved teaching."

Leonard L. Ross, who excelled in medical research, teaching and administration, a volunteer tour guide at the Franklin Insitutue, an Army Medical Corps veteran and devoted family man, died May 10 of a heart condition. He was 85 and lived in West Chester.

After his retirement, he became a volunteer at the Franklin Insititue, lending his vast knowledge of scientific subjects to conducting tours of the revered institution.

His research career was in biology and anatomy. He was among the first to employ the electron microscope as an investigative tool.

A native of Queens, N.Y., Ross was born to Aaron Ross and the former Shirley Smolen. He graduated from the Bronx High School of Science, and went on to New York University where he intended to pursue a medical degree.

However, after serving as an Army medic in Germany and working with hospital patients, he decided not to continue in medicine. He returned to New York University and took degrees first in biologhy and then zoology. In 1954, he earned his Ph.D in anatomy.

Ross met his wife, Marcella Gamel, an artist, at a singles gathering in the Catskills. They were married in 1951. She died in 1995, and he later married Frances Masterson.

Early in his career, Ross was a research assistant at New York University. In 1953, he moved south to teach in the Anatomy Department of the University of Alabama.

There was some cultural concerns as two New York Jews moved into the society of the Deep South, "but they made some of the best friends they ever had there," Jill said.

Returning north, Ross joined the faculty of Cornell University as associate professor of anatomy. In the late '60s, he was visiting investigator in the Department of Biochemistry at Cambride University in London, and held the same position at the University of Milan, Italy.

In the early '70s, Ross was professor of anatomy at Cornell before moving to Philadelphia in 1973 as professor and chairman of the Department of Anatomy at the Medical College of Pennsylvania.

"He was a fabulous teacher and a wonderful person," said longtime friend and former student, Dr. Michael D. Gershon, neurobiologist at New York's Columbia-Presbyterian. "He was really a great human being and a terrific administrator.

"He had a great sense of humor, and a number of quirks. He used to say it was foolish to spend a lot of money on a watch. Buy a Timex and when it stops working, throw it away.

"One time he was lecturing to students when he looked down at his watch. Without missing a beat, he walked to a trash can by the lectern and dropped it in."

"He loved to teach," said D. Walter Cohen, chancellor emeritus of the Medical College of Pennsylvania/Hahnemann University. "He was extremely bright, always on top of everything."

"He was a people person," said his daughter. "He was intelligent, thoughtful, compassionate. He could give the same attention to someone in front of him as he did to thousands of medical students."

Besides his wife, daughter and grandson, he is survived by two other daughters, Jane Camp and Jennifer Robb.