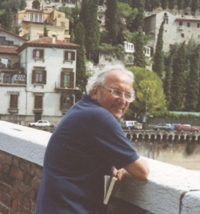 J. Murdoch Ritchie, Higgins Professor Emeritus of Pharmacology at Yale University, died peacefully July 9, 2008 in Hamden, CT after a long illness. Dr. Ritchie was a major figure in the burgeoning field of neuropharmacology during the second half of the twentieth century.

Born in Aberdeen, Scotland on June 10, 1925, he obtained a B.Sc. in Mathematics & Physics from Aberdeen University in 1944. Following wartime work on radar, Ritchie moved to University College London (UCL) where he worked with Nobel laureate A.V. Hill and earned a B.Sc. in Physiology in 1949. He later earned Ph.D. (1952) and D.Sc. (1960) degrees in Biophysics from UCL.

After a two-year stint as a junior lecturer at UCL, Ritchie moved to the National Institute for Medical Research at Mill Hill in London, and in 1958 crossed the Atlantic with his wife Brenda to take a position at the Albert Einstein School of Medicine in New York. There he produced a series of seminal papers on impulse conduction in mammalian peripheral nerve in collaboration with the renowned pharmacologist W.W Douglas. He also studied the action of local anesthetics with future Nobel laureate Paul Greengard. Moving to Yale University in 1968 as Chair of Pharmacology, he soon built an already strong group into one of the top pharmacology departments in the US.

Murdoch Ritchie was among the first researchers to use radioligand binding to count sodium channels in peripheral nerve. He made important contributions to our understanding of metabolic changes during nerve activity, as well as the role of the Na/K-ATPase in maintaining transmembrane ion gradients. In the 1970's and 1980's, Ritchie demonstrated the unequal distribution of sodium and potassium channels in myelinated nerve, and characterized the changes in ion channel density that occur in demyelinating diseases such as multiple sclerosis. He was also the first to show that glia, including Schwann cells and astrocytes, expressed voltage-gated ion channels.

Ritchie was elected a Fellow of the Royal Society in 1976 and a Fellow of the Institute of Physics (London) in 1997. A committed experimentalist, discussions about hypotheses were likely to end with "Look, we can sit here and talk about it all morning, or we can go do it!" Indeed, most mornings he had already finished his own experiments before others arrived in the lab. He continued to conduct his own experiments until his retirement at the age of 75.

Ritchie enjoyed both writing and teaching, and authored and edited over 70 reviews, chapters, books, and monographs. He was director of the Division of Biological Sciences at Yale from 1975-1978, where he championed the establishment of scientific core facilities. He was also co-director of the Interdepartmental Neuroscience Program at Yale from 1993-1999, promoting a novel model for doctoral training that crossed traditional departmental boundaries. Murdoch Ritchie is remembered by his friends and colleagues for his fairness, common sense, and decency in his dealings with others. He is survived by his wife Brenda, son Alasdair, and daughter Jocelyn.

I remember Professor Ritchie fondly as someone who with his wry sense of humour could put a new graduate student who had left home (India) to join the INP program at Yale at ease. While he took scientific discussions mighty seriously, he also passed on his view that maybe we shouldn't take ourselves too seriously!! I wish to pay my condolences to his family. He will be missed. -Dr. Vidita Vaidya