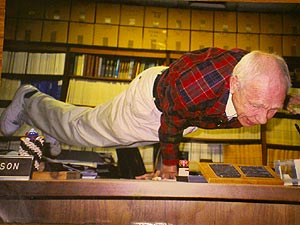 Fred E. Samson died April 15, 2004, at age 86. He spent 21 years at the University of Kansas on the Lawrence campus, where he was Professor and Chairman of Biochemistry and Physiology, and later, Chairman of Physiology and Cell Biology. He had a second career of 29 years at the University of Kansas School of Medicine in Kansas City, Kan., where he was Director of the Ralph L. Smith Mental Retardation and Human Development Research Center. Samson was a dedicated neuroscientist who investigated brain energy metabolism, axoplasmic transport, and oxygen free radicals over a 50-year academic career.

Samson was born in Medford, Mass., in 1918, the son of Fred Samson, Sr. and Annie Belle Pratt Samson. The Samsons were a family of firemen, but in the mid-1930s, young Fred Samson joined the vaudeville circuit with an acrobatic act that performed in theaters in the Boston area. He then attended the Massachusetts College of Osteopathy and received the D.O. degree in 1940. With the onset of WWII, he joined the army, where he was a Staff Sergeant in the Army Medical Corps from 1941 to 1945. He took part in the invasions of Guadalcanal and other islands in the South Pacific. After his discharge from the Army, he was accepted into the physiology graduate program at the University of Chicago and received his PhD in 1952. The same year, he was appointed Assistant Professor of Physiology at the University of Kansas and advanced to Professor and Chairman of the department. In 1973, he moved to the University of Kansas Medical School, in Kansas City, Kan., where he served as the director of the Ralph L. Smith Mental Retardation and Human Development Research Center until 1989. He continued to play an active role as Emeritus Professor of Molecular and Integrative Physiology until 2002.

Samson's local and national influence on neuroscience was greatly enhanced by his association with Frank Schmitt and the Neurosciences Research Program (NRP). He worked full time on the program at its beginning and then spent summers helping organize conferences and publish proceedings from these conferences. Since the program brought together neuroscientists and scientists from many fields (mathematicians, physicists, chemists, etc.) to focus on the basics of brain function, Samson became a close friend with many scientists, friendships he retained throughout his life. He was a strong believer in the Schmitt conference method and used it successfully in bringing scientists together in the oxygen radical meetings that he organized.

Samson was a delightful conversationalist with a good sense of humor. Also, he was highly organized and structured in many parts of his life. He was never without his yellow note pad at lectures and seminars and he had the gift of finding exactly the right question at the end of a presentation. In his shirt pocket were his ever-present 3x5 cards, his ready source of names and phone numbers as well as questions to ask colleagues. His morning swims across Lake Quivira, in front of his home, were legendary as were his one-arm hand stands, a holdover from his vaudeville days. The picture shows Samson, at age 74, doing a one-arm handstand on his office desk. He also loved water-skiing, a sport he continued to enjoy into his early 80s.

During his last 10 years at the medical school, Samson spent increasing amounts of time with young faculty and students. His opinions on grants and publications were highly regarded and helpful to many. His impact on the University of Kansas can be appreciated by the influx of funds that established the Fred Samson Lecture Series in the Department of Molecular and Integrative Physiology.