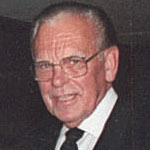 David Ottoson, the International Brain Research Organization's Secretary-General between 1983 and 1997, and a true ambassador for world neuroscience, died in Stockholm, Sweden on December 27, 2001.

During the fourteen years of David Ottoson's appointment as Secretary-General, IBRO experienced tremendous growth and development, due largely to his perception, enthusiasm and personal commitment. The organization was transformed from a small body of 2000 members into an international scientific organization of more than 50,000 members.

In a letter to the membership on the eve of his retirement as Secretary-General, David Ottoson described IBRO as a "success story." This success was in no small way due to his dedication and determination in the role he played for IBRO. For this legacy the IBRO membership is truly grateful.