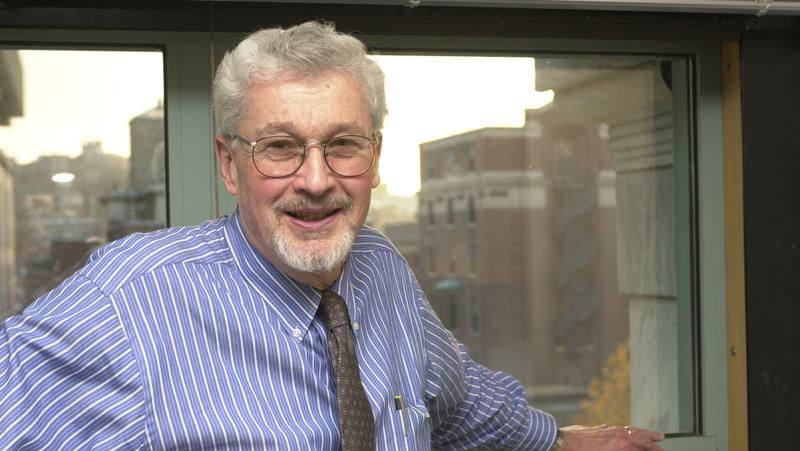 David Dickinson Potter (December 22, 1930—February 11, 2019) died quietly in his sleep. He was the Robert Winthrop Professor of Neurobiology, Emeritus at Harvard Medical School. David came to the Medical School in 1959 with a small group of colleagues. Otto Krayer, the Chair of the Department of Pharmacology at the medical school, aware of the growing importance of neurobiology to the field of pharmacology, had invited Stephen W. Kuffler to join his department. Kuffler accepted the invitation and brought a group of four younger colleagues with him as a prefabricated Laboratory of Neurophysiology. In 1966, this group, together with new recruits, became the core faculty of a new Department of Neurobiology, with Kuffler as its chair from 1966 to 1973. After Torsten Wiesel's term (1973-1982), David Potter served as department chair from 1982 to 1990. The rationale for this first neurobiology department was to bring together colleagues with an interest in the nervous system and expertise in a diversity of disciplines, such as neurophysiology, biochemistry, electron microscopy, histology, and development – and more recently, molecular genetics. The new department was an acknowledgement of neurobiology as a conspicuously multidisciplinary field. The value of this approach not focused on a set of methods but on an organic system is, of course, synergy.

David Potter was well known for his important research contributions, his inspired teaching and his unswerving dedication to affirmative action. He graduated from Swarthmore College (in 1952), where he met Mary Crawford (Molly C. Potter), his wife of sixty-eight years. He earned his Ph.D. from Harvard College (in 1956) and had his first post-doctoral fellowship in Professor Bernard Katz's Department of Biophysics at University College London. During this fellowship, David worked with another American post-doctoral fellow (E. J. Furshpan). Together, they provided the first direct evidence for 'electrical' transmission at synapses between neurons. This was at a time when the long-standing debate about 'chemical' vs. 'electrical' synaptic transmission had been more-or-less settled in favor of 'chemical' transmission. Since then many examples of 'electric synapses' between cells have been found.

Kuffler, while visiting his old friend, Bernard Katz in 1957, invited Potter and Furshpan to join his group at the Wilmer Eye Institute at Johns Hopkins University, an invitation they happily accepted. In the following year, when Kuffler received his invitation from Otto Krayer, two other members at the Wilmer Institute were David Hubel and Torsten Wiesel. These five – Kuffler, Hubel, Wiesel, Potter and Furshpan – were the group that went to Harvard Medical School as the Laboratory of Neurophysiology. Potter and Furshpan were on-again, off-again colleagues for more than sixty years.

Beginning in the early 1960's, now at Harvard Medical School (HMS), David Potter was part of a team (including Edward Kravitz, Nico Van Gelder and Steve Kuffler) working to identify neurotransmitters in neurons of the lobster nervous system. Lobsters, unlike vertebrates, have inhibitory neurons that directly innervate the muscles of the body and limbs. In painstaking dissections, members of the team separated out the axons innervating particular muscles in the lobster, and used a definitive physiological assay to determine which one of the axons was the inhibitor. Lengths of these identified axons could then be assayed by sensitive biochemical methods. Gamma-aminobutyric acid (GABA) was known from work in other laboratories to mimic the effects of electrical stimulation of the inhibitory axons, and was thus a candidate to be the inhibitory neurotransmitter that is normally released by these axons. Indeed, high concentrations of GABA – up to 1% of their wet weight – were found by the team, but only in the inhibitory axons. These axons also contained the enzyme that normally synthesizes GABA. These experiments by Kravitz, Potter and their colleagues provided the first definitive evidence for GABA as a neurotransmitter. It has since been identified as the major inhibitory neurotransmitter in the brains of vertebrate animals, including humans.

In another of his research projects, together with Furshpan, Paul Patterson, Story Landis, Peter MacLeish, Steven Matsumoto, Paul O'Lague, and others, David studied the development of synaptic transmission in mammalian sympathetic neurons. In a novel system for identifying the neurotransmitters released by neurons, muscle cells were first isolated from rat hearts, and then grown in culture in the form of small islands, less than one-half millimeter in diameter; the muscle cells on each island continued to beat, all contracting in synchrony – a tiny, two-dimensional heart. Then the neurons, isolated from the sympathetic ganglia of newborn rats, were added to the culture at low density so that only a single neuron settled on some of the heart-cell islands. The axons of the neurons, confined to the islands, innervated the heart cells at high density, so that stimulation of a neuron evoked conspicuous responses in the heart cells. Studies of the physiology and pharmacology of these responses provided strong evidence for the identity of the neurotransmitters that evoked them.

In their new positions at HMS, Potter and Furshpan were assigned the task of developing and, in part, teaching a new course in neurobiology for medical students. They were inspired by recent seminal developments in cellular neurobiology. First, was research at Cambridge University by A. L. Hodgkin and A. F. Huxley, who solved in exquisite detail a seemingly intractable problem: how do neurons generate the remarkable signals known as nerve impulses? Second, was the body of work by Bernhard Katz and his colleagues at University College London on the mechanisms of transmission at neuromuscular junctions, which served as a model system for understanding transmission at neuron-to-neuron synapses. These two elements – the nerve impulses, which conduct information from one part of the nervous system to another, and the process by which information is transmitted at synapses from one neuron to another – are the fundamental processes that allow nervous systems to process information, to carry out their central function. These two bodies of work were ingenious but intricate, demanding to read and even more challenging to teach. How was one to communicate to students their logic and essence, but in satisfying deptB? Potter and Furshpan developed and rehearsed together their set of lectures on these and related topics, criticizing each other's presentations and pressing each other for clearer explanations. They wrote and handed out to students nearly verbatim accounts of each lecture. These 'handouts' became well known and were used by others in their courses on neurobiology. David developed and presented a memorable lecture on the reward system of the brain, central to an understanding of addiction. Another major element in David's teaching activities was in programs for minority students.

The assassination of Martin Luther King on April 4, 1968 caused a small group of younger HMS faculty members, who were outraged and ashamed by this event, to come together and plan a suitable response. David Potter was a prominent member of this group. They discovered that the total number of Black students admitted to HMS in the previous twelve years had been nine, and undertook as their major project to raise awareness of this situation and to change it. They systematically visited department chairs and other influential members of the faculty to rally support for change, and often resorted to the phrase, "three-quarters of a minority student per year". The wording of a resolution to be placed before the faculty, in its final form, stated that the faculty was committed to the admission each year of fifteen "disadvantaged" students, understood to mean Black, but in the event also included Latino students. After a stormy faculty meeting at which the resolution was tabled, it was introduced again, and at the next meeting was passed. However, given the medical school's reputation, it was questionable whether a sufficient number of minority students would apply.

At this point, without telling any of his colleagues, and paying his own travel expenses, David undertook a one-man campaign, visiting traditionally Black colleges and universities with a substantial number of minority students, to publicize the new policy. When David showed the faculty resolution to the students and faculty at these institutions, although initially skeptical, they were impressed, and many students were motivated to apply. In the event, sixteen minority students were admitted that year to the entering class at HMS. This outcome had seemed unlikely, and would probably not have occurred without David's intervention. David later became a member of the medical school's admissions committee and continued to be an advocate for minority students and women until he was no longer able (at age 85).

In the 1990's, David worked with Joan Reede, now the Dean for Diversity and Community Partnership at HMS, helping her teach middle- and high-school minority students in after-school programs. Reede, since coming to the medical school in 1990, when she founded the Minority Faculty Development Program, has been an extraordinary vital force for making opportunities in medicine and the biomedical sciences available to minority students. She served as an inspiration for David.

In 2000, a group of Harvard Physicians made a visit to the Hopi Indian community in northeastern Arizona. Their purpose was to discuss programs for improving health care on the reservation. David was invited to join the group because of his known interest in minority education and in Native American affairs. At Hopi, David met with the Vice-chair of the school board, who charged him with providing a three-week summer program at Harvard for ten Hopi high school students. David accepted the challenge and arranged for five of the students to work at the Harvard School of Design, ostensibly making plans for a new middle school at Hopi; for the other five students, in response to a request from Hopi, David gave a series of lectures and led discussions on diabetes. The following year a contingent of students and chaperones from the Fort Peck Reservation in northeastern Montana joined the program, and David was joined by Ed Furshpan in teaching it for the next nine years. Two other native communities participated in the following years (Wampanoag of Massachusetts and Native Hawaiians [aboriginal Polynesians]). The program adopted the title, Native American High School Summer Program (NAHSSP), and expanded to two three-week sessions, with two of the four communities attending each session. At the suggestion of community members, drug addiction was made the primary topic of study, and case-based learning was introduced as a major learning activity. The study case was written as a cooperative effort between members of Fort Peck and the program faculty. The program has been considered highly successful in meeting its goals. Almost all of the participants have attended college, and for some of the communities the program is said to have catalyzed beneficial social change. (The current legal counsel for Fort Peck is an alumna of the Program and a graduate of Stanford Law School.)

David recruited several black students to join the research group that he and Ed Furshpan headed. These students earned their PhD's and one of them earned an MD degree as well; all are currently professors or emeritus professors. One of these former students (Peter MacLeish) became the chair of the Anatomy Department and Director of the Neuroscience Institute (which he founded) at Morehouse Medical School; another (Colin Nurse) is a Professor of Biology at McMaster University in Ontario; the third (Mark Johnson) is an Associate Surgeon at Brigham and Women's Hospital in Boston, an Assistant Professor of Neurosurgery at HMS, Director of the Neurosurgical Pain Management Program at Brigham and Women's Hospital, and he directs his own research laboratory at the hospital.

When David perceived a particular need for helping members of groups that have been victims of prejudice and discrimination, he quietly got up and did what he saw needed to be done. He had an unusual purity of character. These activities were never about him; he shunned self-advertisement. He was a remarkably kind and generous man. His vegetable garden was memorable for the quality and quantity of the beans, tomatoes, and Lebanese Kusa squash it produced every year. He will be missed.