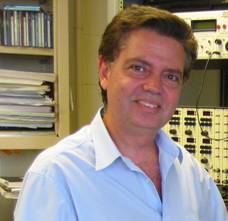 Dr. Ary S. Ramoa, neuroscientist, scholar, teacher, physician, husband, father and friend to many, passed away on July 1, 2005 from complications of Crohn’s disease.

Born in Rio de Janeiro, Brazil on December 21, 1953, Dr. Ramoa received his M.D. from the State University of Rio de Janeiro and a Master’s degree, with Dr. Carlos Eduardo Rocha Miranda, from the Federal University of Rio de Janeiro in 1981. In 1982, Dr. Ramoa moved to the United States to earn his Ph.D. with Dr. Ralph Freeman at the University of California at Berkeley. After completing his Ph.D. in 1986, he received postdoctoral training with some of the most influential scientists in the field of visual plasticity: Dr. Carla Shatz at Stanford University, Dr. Mriganka Sur at MIT and Drs. Pasko Rakic and David McCormick at Yale University. He joined the faculty of the Department of Anatomy and Neurobiology at Virginia Commonwealth University School of Medicine in 1993, where he quickly earned national and international recognition for his studies of the cellular and molecular mechanisms involved in the development of the visual system.

Dr. Ramoa was a creative and innovative scientist who made fundamental contributions to the fields of visual neuroscience and developmental neurobiology. His research was focused on the role of neural plasticity in amblyopia, a neurological disorder characterized by reduced vision in one eye that afflicts millions of people worldwide. He pioneered the in vivo use of viral mediated gene transfer and antisense techniques to discover some of the key factors involved in loss of visual function leading to amblyopia. In a complementary series of studies, he examined the mechanisms that regulate recovery of function in the visual cortex following early deprivation. In an exciting new application, he also established a model system in the ferret visual cortex for understanding the effects of early alcohol exposure on cortical development and plasticity. Dr. Ramoa discovered that neural plasticity is reduced in fetal alcohol syndrome, a leading cause of mental retardation in the western world. Collectively, Dr. Ramoa’s research has contributed significantly to our emerging understanding of how loss and recovery of brain function are regulated. Ultimately, Dr. Ramoa’s findings could help devise new therapeutic strategies to ameliorate the impact of sensory deprivation and enhance neuroplastic potential for rehabilitation in diverse neurological disorders.

With his devotion not only to research, but also to his friends, family and colleagues, Ary leaves behind a vast number of people whose lives were touched and improved by his presence. He was a role model for his students, post-docs and fellow researchers and his unique and creative approaches will live on in all those fortunate to have known him. Ary will also be remembered for his intelligence, enthusiasm, smile, kind-heartedness and dedication to the advancement of neuroscience. He was respected worldwide, esteemed by those who knew him and loved dearly by those closest to him. He truly will be missed.