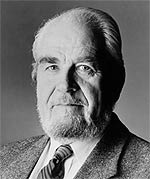 After having been felled by a severe stroke in 1994, Pierre Gloor passed away peacefully at the Montreal Neurological Institute/Hospital on Friday, October 24, 2003. He is survived by his wife of forty-nine years, Luba Genush Gloor, his children Irene Gloor and Daniel Gloor, and his grandchildren Amanda and Patrick Gloor and Justin and Emilie Shoubridge.

A native of Switzerland, Pierre Gloor received his medical education at the University of Basel, Switzerland, and did his postgraduate work in neurology and neurosurgery at L'Hôpital Louis Pasteur in Colmar, France. He joined McGill's Montreal Neurological Institute in 1952 as a fellow in electroencephalography and neurophysiology, where he studied with Wilder Penfield and Herbert Jasper, receiving his PhD from McGill in 1957.

He began lecturing at McGill in 1954 as an Assistant Professor, became Full Professor in 1968 in the department of Neurology and Neurosurgery, and was named a McGill Emeritus Professor in 1998.

Gloor worked closely with the clinical and research teams at the Montreal Neurological Institute in the treatment of epilepsy. His work in understanding and treating this disorder earned him a worldwide reputation. He was a teacher-clinician-scientist-scholar able to mesh these activities to an incredible degree, to bring the latest experimental results to bear on clinical decisions, and to use clinical knowledge to design theories and experiments.

He published approximately 250 scientific articles covering wide areas of brain research. His definitive monograph, entitled "The Temporal Lobe and Limbic System," published by Oxford University Press in 1997, was a culmination of his life's interest in the anatomy and physiology of the temporal lobe and its disorders.

He was a key figure in the training of graduate students in neuroscience and of young physicians in neurology. He had a prominent role in training a generation of now internationally renowned experts. He took an active part in teaching local EEG technologists and in organizing a CEGEP program. He also acted as consultant to many Montreal hospitals.