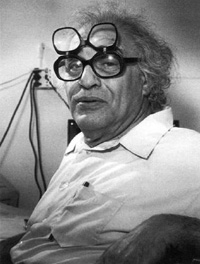 Jerry Lettvin’s death at the age of 91, on April 23, 2011, marks the loss of one of neurophysiology’s giants. Jerome Ysroael Lettvin was born in Chicago on February 23, 1920, received his education, including training as a neurologist and psychiatrist at University of Illinois, and, after a stint as a military physician in World War II, joined the faculty at MIT, where he became professor of electrical and bioengineering and communications physiology.

Lettvin’s work was notable for its novelty and incisiveness. His best-known paper, entitled “What the Frog’s Eye Tells the Frog’s Brain” described, for the first time, “feature detectors” in the retina. This paper set the stage for modern visual neurophysiology. Jerry made many other discoveries, spanning much of the breadth of neuroscience. Together with Jose Del Castillo he carried out some of the first voltage-clamp studies on nodes of Ranvier. He described target-finding specificity in the regeneration of axons within the optic tectum. And, with Steve Raymond, he provided some of the first evidence for filtering of spike trains at axonal branch points. These are just examples. But Jerry was more than a neurophysiologist. He was widely regarded as a uniquely motivating and captivating teacher. His public debate about the use of psychodelics, with Timothy Leary in the 1960s, was punctuated by Jerry’s retort of “Bullshit!” to Leary, who was arguing from a lotus position, and helped to turn the tide against widespread LSD usage.

Over the years, Jerry served as provocateur for and collaborated with some of the most fertile minds in neurophysiology. These included Jose Del Castillo, John Moore, Pat Wall, Warren McCulloch, Walter Pitts, Brad Howland, and Humberto Maturana. He was also a good friend of Norman Geschwind, and the three of us enjoyed some wonderful dinners together.

Jerry was an iconoclast, and a practical joker. He took pride in arguing against almost any established idea. On one occasion he tried to convince me that the safety factor of myelinated fibers was 10,000. I knew, from the work of Tasaki and my own work, that it was three orders of magnitude lower, about 5 to 6. As I tried to reconcile the difference between Jerry’s forcefully argued but wildly inflated estimate and my own, it took me 5 minutes to realize that he had used a value for membrane capacitance that was incorrect by several orders of magnitude. I knew that Jerry knew the correct value for membrane capacitance. When I pointed out this discrepancy, he smiled and replied, “I know. I made it up.” Seeing my quizzical look, he smiled even more broadly and added, “It was the only way to convince you”.

Jerry was always generous. As a new member of the faculty at Harvard Medical School in 1970s, I had no laboratory space. Jerry offered to share his new suite of laboratories on the top floor of Building 36 (the new Research Laboratory of Electronics) at MIT and, as a bonus, told me to use funds from his grants if necessary. He also arranged an appointment as visiting Assistant Professor at MIT for me. As part of my introduction to the faculty, Jerry and Marshall Devor arranged for me to give an inaugural talk, just before Christmas, in MIT’s Department of Psychology. The lecture room was relatively large and was packed. I presented my first 4 or 5 slides and, as I began to explain the next one, Jerry – all 300 lbs and with spaghetti sauce on his shirt – stood up, walked to the front of the room, and began writing on the blackboard. He quickly drew a diagram of the series capacitance in electromotor neurons and announced, “Steve, you’ve got it wrong”. As I stared, flabbergasted, at the floor, he said, “But that doesn’t matter – go on”. I went on with the lecture, but thought it was ruined.

As Jerry and I walked back to Building 36 afterwards, Jerry was silent, clearly thinking. Suddenly he fell to his knees. At first I thought he was ill, but then I saw that he was using his finger to write in the snow. A few moments later he looked up and said, “Oh my G-d. I made a mistake – the series capacitance is on the anterior end, not the posterior end!” Several weeks later he gave me a gift, an exquisite leather bound copy of The Handbook of Neurology. His inscription read, “Merry Christmas, and apologies for my foolish mistake”. Jerry had a towering intellect, and it was matched by the size of his heart.

Read Jerome Lettvin's chapter in The History of Neuroscience in Autobiography Volume 2.