Society for Neuroscience - Elena A Kharlamov 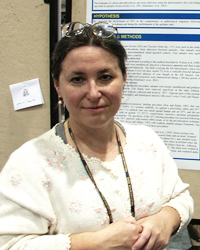 Elena A. Kharlamov passed away on January 15, 2013 in Pittsburgh, Pa at the age of 55. She leaves behind her husband of 28 years Alexander, twin daughters Anna and Anastasia, sister Tatyana, and niece Ekaterina.

Elena’s research focused on posttraumatic epilepsy using experimental animal models of brain injury such as photothrombosis, middle cerebral artery occlusion, and traumatic brain injury by a controlled cortical impact. Her professional aptitude, high enthusiasm, and diligence resulted in numerous peer-reviewed publications. Moreover, Elena generously offered her time to help others. She was always motivated to advance her field of study and contribute to the career advancement of her colleagues.

Elena will be deeply missed by her relatives and fellow employees.  Her contributions to the medical field and community will always be cherished.