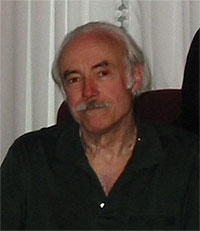 David Ingle, Ph.D. died Jan. 14 in Framingham, Massachusetts of pneumonia developed while recovering from heart bypass surgery. He was 71.

Ingle was a well-known neuroetholgist and experimental psychologist, trained in experimental psychology and biology at the University of Chicago, where he earned the Ph.D. He then moved to MIT as a research associate of the famous neuropsychologist Hans-Lukas Teuber. During that period he met Richard Held and Gerald Schneider, with whom he organized the first "two visual systems" symposium, held and published in Boston in 1967 ("Locating and Identifying: Two Modes of Visual Processing", by D. Ingle, G.E. Schneider, C.B. Trevarthen, and R. Held). With Schneider he organized a meeting at MIT on "Subcortical Visual Systems" which was published as a book in 1970, edited by Ingle and Schneider. Later books edited by Ingle with colleagues included Analysis of Visual Behaviorin 1982 (Ingle, Goodale and Mansfield) and Advances in Vertebrate Neuroethology in 1983 (Ewert, Capranica and Ingle).

David pursued a research career in the Boston area, working on vision in fishes, frogs and toads for a number of years while affiliated with the McLean Hospital and Northeastern University, with periods of time as a visitor at Cornell University and at Brandeis University. His research activities continued with small mammals, primarily gerbils, until a neurodegenerative disease made locomotion too difficult for him to continue with the laboratory experiments.

Thereafter, he pursued one of his avocations, collecting Scottish ballads and other folk music and stories, and giving occasional performances where he read or sang these folk songs and tales. In this activity he formed a partnership with Libby Franck, with whom he sometimes performed and shared a home with in Framingham. This activity in the arts extended to the presentation of many historical and dramatic programs.

Throughout this period, David never lost an intense interest in science, and he maintained a number of contacts with colleagues and pursued writing projects. He did this while taking various medications to control the considerable pain he suffered in his lower body.

A pain medication he was taking led to an apparent enhancement of visual imagery, and Ingle discovered and began experimenting with a kind of visual short-term memory he called "visual persistence" or "central visual persistence." He found out that the ability to experience these images was rare but did occur in others, not only as a result of pain killing drugs but also in some other people. These studies were a major occupation of Ingle during his last few years. He completed two papers, which were accepted for publication in the journalPerception not long before his unexpected death ("Central Visual Persistences, I and II”). The phenomena he discovered open a new window on the workings of the human brain.