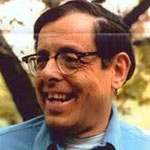 Many of you already know that Daniel Gilbert has died. I wanted to share with all of you the announcement of his death that I sent to most of our local friends to inform them of his funeral:

It is with deep regret that I must inform you that Daniel Gilbert passed away on Saturday, October 14, 2000, at age 75. He had been in a hospital or a nursing home following a severe stroke on June 26, 2000. This was caused by a massive hemorrhage in his recurring meningioma brain tumor. He had six operations to remove this tumor over the past 20 years, with the latest being in March, 2000. He had appeared to recover from this surgery , and enjoyed a trip to Paris with Claire in May to attend a meeting, in a wheelchair as he was for several years. But then he suffered this stroke, which left him completely paralyzed on the right side, unable to speak or to swallow. He developed pneumonia and was rushed to the hospital on October 4, but did not respond well to very intensive treatment. He went into septic shock, and his heart failed. He had just retired from NIH, on June 16, 2000, at age 74; he was given the honor of Scientist Emeritus status upon his retirement. He is survived by his wife and son, Claire Gilbert and Raymond Gilbert.

His funeral service was on October 18, 2000, at the Danzansky-Goldberg Memorial Chapel in Rockville, Maryland. Our rabbi was Ethan Siedel, who married Daniel's cousin Rachel and has known him well; he spoke movingly of Daniel's devotion to family, as well as of his distinguished scientific career. His colleague of 38 years at the National Institutes of Health, Gerry Ehrenstein, spoke of their long years together. His wife, Claire Gilbert, and son, Raymond Gilbert, then made remarks about all the good memories they have of Daniel, a devoted husband and father. They will miss him more than words can say. This was followed by burial in the Judean Memorial Gardens in Olney, Maryland.