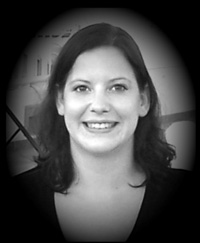 It is with great sadness that we mark the unexpected passing of Carrie E. John, PhD on September 27, 2009. CJ was a brilliant and talented young scientist and a friend to many.

Carrie grew up in Wilmington, NC, graduated with a Bachelor’s degree from Cornell University in 2000, and earned her PhD from Wake Forest University in 2006, working in the Physiology and Pharmacology Department under the mentorship of Dr. Sara Jones, where she used in vitro voltammetry in mice to study the function of the dopamine transporter in response to drugs of abuse such as cocaine, amphetamine, and methamphetamine. As a graduate student, she was the recipient of numerous awards and honors for her work, including a pre-doctoral Ruth Klingenstein National Research Service Award from the National Institute on Drug Abuse in 2003. She was selected to speak with a series of Nobel Laureates in 2005, and received the David K. Sundberg award for outstanding graduate student work, as well as receiving numerous travel awards for conferences such as Monitoring Molecules in Neuroscience: In Vivo Methods, the Gordon Research Conference on Catecholamines, the International Society for Neurochemistry, and the prestigious 3-year Neuroscience Scholars Program award from the Society for Neuroscience. She was active in the development of the graduate student curriculum and in graduate student recruitment, and volunteered with the Physiology and Pharmacology Department, the Brain Awareness Council, and local science fairs to help further neuroscience awareness in the community.

After obtaining her PhD, Carrie John went to the laboratory of Patricio O’Donnell in the Neurobiology and Anatomy Department of the University of Maryland in Baltimore, where she set up voltammetry techniques and began electrophysiological studies looking at the role of dopamine in the prefrontal cortex in the liability for addiction present in rodent models of schizophrenia. Carrie received a competitive Ruth Klingenstein National Research Service Award in 2007 to conduct her research.

Carrie was a member of the Society for Neuroscience, the Neurotoxicity Society, and the International Society of Neurochemistry. She published 10 articles on topics of drug abuse and dopamine transporter involvement in journals such at the Journal of Neurochemistry, The Journal of Neuroscience, and Proceedings of the National Academy of Sciences. Carrie was a thoughtful and passionate researcher who was already making important contributions to the field of drug abuse and dependence at a very early stage in her career.

Although Carrie was extremely passionate about her work, she was also active and involved in many other areas of life. She was a charming, witty, and fun personality, enjoyed playing recreational sports such as softball and volleyball, and was very involved in her Native American heritage. She loved her dog Roxie, and to spend time with her many friends and loved ones. Her brilliance and vivacity will be missed by all who knew and worked with her.

Carrie is survived by her fiancé, Clint McCracken, PhD, her parents, Robert John and Marianne Woessner, her sister, Jennifer John, and many more family, friends, and colleagues. A memorial service will be held in Wilmington, NC, on October 3, 2009. Memorial contributions in her name may be made to Susan G Komen Breast Cancer Foundation or to the March of Dimes.