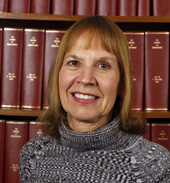 Vivien Casagrande, Ph.D., a neuroscientist and professor at Vanderbilt University School of Medicine noted for her contributions to the visual sciences, died peacefully at her home on Saturday, Jan. 21, surrounded by her husband, James Andrew “Mac” McKanna, and sons James and Paul McKanna. She was 74.

Friends and family are invited to a celebration of Dr. Casagrande’s life on Saturday, March 4, at Christ Lutheran Church, 299 Haywood Lane in Nashville. The service will begin at 11 a.m., followed by lunch and fellowship.

Known internationally for her contributions to evolutionary, developmental and sensory systems neuroscience, Dr. Casagrande was a professor of Cell & Developmental Biology, Ophthalmology and Visual Sciences and Psychology.

“She was a true pillar of our department for over 40 years,” said Ian Macara, Ph.D., the Louise B. McGavock Professor and chair of the Department of Cell and Developmental Biology. “(She) gave her heart and soul to science.

“She has also been a good friend and a dedicated, supportive mentor to generations of her trainees. She will be deeply missed by us all,” he said.

Dr. Casagrande earned her Ph.D. in Physiological Psychology from Duke University in 1973. After postdoctoral work at Duke and the University of Wisconsin-Madison, Dr. Casagrande was appointed assistant professor at Vanderbilt University School of Medicine in 1975.

Dr. Casagrande was one of the first scientists to demonstrate that visual information is processed in distinct and functionally parallel streams. She is perhaps best known for discovering a third pathway in the primate visual system—a third distinct population of retinal ganglion cells—through which visual processing of form and motion occur.

By mapping visual circuitry in several primate species, she revealed clues to the evolution of the visual system and added greatly to current understanding of brain development and plasticity.

In the course of her research, Dr. Casagrande brought innovative technologies to Vanderbilt, including optical imaging of the cerebral cortex and multi-electrode recording, which helped her answer a broad range of questions about the organization of the visual system and the coding of visual information.

Her work helped reveal the origin of nearsightedness (myopia) and provided the mechanistic basis for diseases that cause blindness, including macular degeneration, cataracts, glaucoma and diabetic neuropathy.

“Vivien has been a star researcher at Vanderbilt,” said Jon Kaas, Gertrude Conaway Vanderbilt Distinguished Professor of Psychology, who knew Casagrande since her graduate school days. “She trained a number of neuroscientists, who became great in their own right, and they recognized that they had received the very best training.

“Most importantly, she made us all better and was key in developing the neuroscience community that we have here at Vanderbilt today,” Kaas said. “What a person and what a scientist. She will be remembered and greatly missed.”

Dr. Casagrande received numerous honors for her research, including the Charles Judson Herrick Award from the American Association of Anatomists in 1981 and, from Vanderbilt University, the Charles R. Park Award in 2012 and a Chancellor’s Award for Research in 2013.

She was a past president of the Cajal Club, the nation’s oldest neuroscience society, served twice as president of the Middle Tennessee chapter of the Society for Neuroscience, and was a fellow of the American Association for the Advancement of Science.

In addition to her research, Dr. Casagrande was instrumental in the creation of the Neuroscience Graduate Program at Vanderbilt, co-directed the medical school’s systems neuroscience course, and played an important role in the Vanderbilt Vision Research Center.

In November, Dr. Casagrande’s colleagues at Vanderbilt honored her distinguished career with a “Lifetime of Vision” symposium, a “fitting tribute” to her and to her community of fellow scientists, said Lawrence Marnett, Ph.D., University Professor and Dean of Basic Sciences in the School of Medicine.

“Her legacy will live on,” Marnett said, “in the form of the Casagrande lecture and graduate student awards that she and Mac so generously endowed.”

In lieu of flowers, contributions in her honor may be made to the Vivien Casagrande Lecture & Scholarship in Systems Neurosciences; If you care to donate, please use this link. To allocate your gift to one of these funds, please make a note of the allocation preference (R#) in the special comments section of the online gift form.