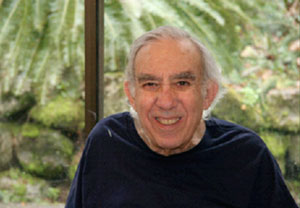 Our beloved friend, colleague and mentor, Dr. Victor Denenberg, passed away at 12:30 p.m. on Saturday, July 19, 2008. He had battled cancer for some time, but died peacefully. He is survived by his wife Evelyn Thoman, three daughters, and six stepchildren, as well as numerous grandchildren. According to his daughter, he noted that his greatest accomplishments were "his children and his students, because they are the future."

Victor H. Denenberg was born April 3, 1925, in Chicago, Illinois, and raised in Washington, DC. He served in the Army infantry (95th Infantry) in World War II at age 18-19, and was wounded in action. He spoke once to his students about his service, saying only “We were advancing to the beach. Other kids were dropping their machine guns and running back. We went forward.”

Vic had 4 daughters from his first marriage - Carol, Susan, and Julie, as well as Nancy who passed away several years ago. He also had a son, Jeffrey Lewis, who died in infancy.

In 1969, as a tenured Professor at Purdue University, he was recruited to a newly created program in Biobehavioral Sciences at the University of Connecticut, in Storrs, CT, where he served as Professor, and subsequently Acting Head/Coordinator (1984 – 2000). He married Evelyn Thoman in 1975, with her 6 children bringing their total brood to 10. He was enormously proud of his children and step-children, speaking of them often, and he and Evelyn decorated their home almost exclusively with professional art by their offsping. He and Evelyn also maintained a large menagerie of animals including dogs of various sizes, cats, and a goat that many of his graduate students were taught to milk. Vic enjoyed chess, reading, and skiing, and also learned to cook later in life. He relished cooking for others, and always enjoyed a good meal.

Vic retired as Professor Emeritus in 2000, and accepted a position as Visiting Professor at the University of Washington, near his new home in Issaquah, WA.

Over the course of his career, Vic published nearly 400 scholarly papers and chapters, including several statistical texts. He served on various National committees relating to early development, and spoke nationally and internationally at more conferences than can be counted. He served as reviewer for innumerable scholarly journals, and received upwards of 5 million dollars in federal and private research funding to support his ongoing research on the early development of the brain and behavior. He is listed in Who’s Who, was invited to Russia for the 100th Anniversary celebrating Pavlov and was noted as a national expert in both statistics and also the role of early experience in development. He was also a founding/charter member of the Society for Neuroscience, a conference where over 30,000 scientists now meet annually. However, his most notable academic achievement was unquestionably the 70+ MS and PhD graduate students that he trained and nurtured over the course of his career -- most of whom have advanced to National and International appointments of their own.

Vic was beloved by his students for his wit and intelligence, his outstanding ability to judge character in his students, and his willingness to work with them to enhance their strengths and overcome their weaknesses -- always while providing large amounts of positive feedback and unconditional support. Vic was always delighted to debate moral and ethical dilemmas, and to discuss broad issues that his students might later refer to as "the big picture." He was a stickler for details but never got lost in them, always finding a way to place context around any finding or event. He always looked down the road to the next question, the next experiment. For many of his students, he will be remembered as one of the critical figures that changed their lives. He was truly a visionary and philosopher, and will be deeply missed.

I had the pleasure of only knowing Vic for a very short time. I helped to make the new residence in Issaquah, WA a home for he and Evelyn. I was very sad and surprised to learn that his stay was so short. His intelligence wit and friendly nature took me immediately and I enjoyed seeing them both side by side coming down the halls on their scooters. He will be very much missed by myself and others on the staff. I still see Evelyn almost daily and I am inspired by her amazingly strong and graceful spirit, always friendly and smiling. Two unforgettable characters. -Don Olson

As a former student, I can think of no other mentor who had a more profound influence. It was an honor to have worked with Vic. May his advice, "Carry your theories lightly," keep our underlying assumptions scrutinized. -Jonathan Stockler